Brett Howden Must Protect the House

As with at least a handful of certain names for the Rangers the past few seasons, Brett Howden doesn’t necessarily look out of place when on the ice. Physically he has the tools; he’s a decent to good skater who appears to be giving max effort. Partially because of this (and his on-ice shot percentage spike from games 5 to 20), he became one of David Quinn’s favorite young forwards, peaking with consistent top six minutes between games 15 and 25. He produced in this time, scoring four goals and nine assists during the months of October and November.

The season-long results for the soon to be 21-year-old, however, have not been as good as his effort appears to be. Simply put, when Howden has been on the ice for the Rangers this season, they have been consistently out-shot and out-chanced to a significant degree. Due to this, I wanted to explore what are the true weak points of Howden’s results so far, as it certainly seems the Rangers (and many fans) are already penciling him in as a bottom-six center heading into next fall. 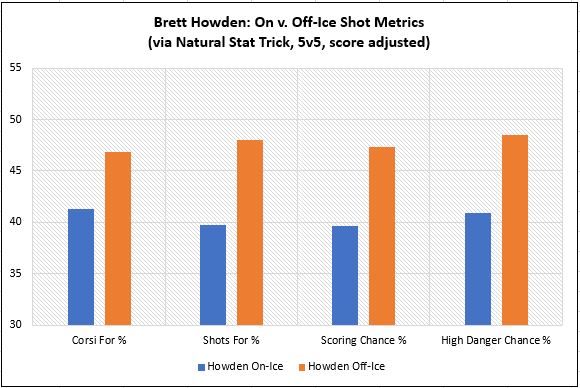 The above chart hits on my “simply put” sentence from above. The gap in those shot metrics are some of the worst in the NHL for forwards, as Howden has brought the Rangers down from a below-average team to a historically bad NHL team when on the ice. The main problem seems to be shots and chances against, not necessarily in generating shots and chances for. 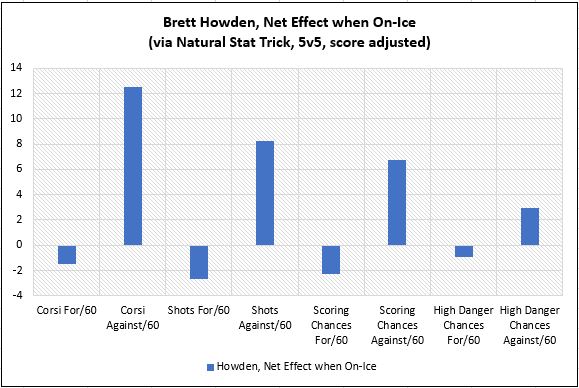 At 20 years old, this isn’t particularly shocking that he’s struggling with playing defense in the NHL. That said, there are a sample of peers that have not struggled to these kinds of depths. There have been 44 NHL Rookie forwards to have played more than 300 minutes (28 or more games played) this season. In the “against” categories of the chart above, Howden ranks last of those 44 players in all of them (via Natural Stat Trick). For some positive perspective, however, sometimes these rough first seasons happen, as there are plenty of good forwards who had struggles relative to their teammates in their rookie seasons in the modern era (since 2007).

Since returning to the lineup around game 60 after injury, Howden has increasingly began to see more ice time. Generally speaking, players who play more tend to play against higher TOI competition, most of whom are better NHL players. While it is a bit of a crude exercise, Howden has generally done better when he plays down the lineup in a 3rd or 4th line center role at 5v5. 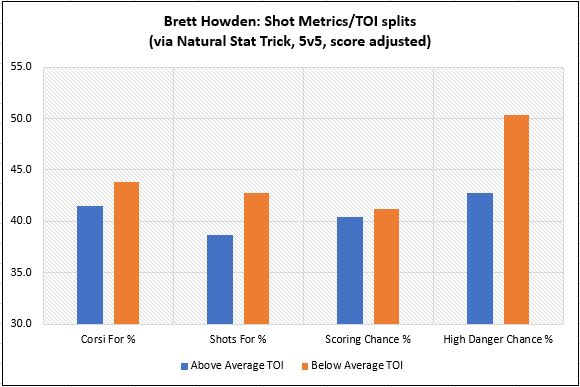 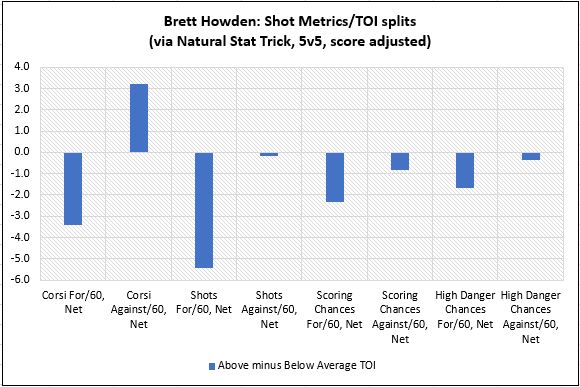 In the first chart, you can see that when he receives less than his average TOI thus far (about 11:40 per game at 5v5), his metrics all improve. The caveat comes with the second chart, as he improves his metrics by generating more shots and chances while on the ice instead of limiting them. This makes intuitive sense, because if he’s playing less in a game at 5v5, he’s likely playing lesser-TOI opponents as well (over the course of time). He can generate more offense against worse players, which is encouraging, but the fact that he still can’t limit the shots and chances against is still concerning.

To be perfectly clear: all of this is not to say that Howden shouldn’t be an NHL player. He could’ve potentially benefitted from more time in the AHL this season to develop his defensive game, but all of his NHLe (NHL Equivalency) figures indicate that Howden should be an NHL player. The issue here is that in order for Howden to reach his two-way potential, he must progress next season (or ASAP) in being better at protecting the house, aka the high-danger areas in front of his own net. 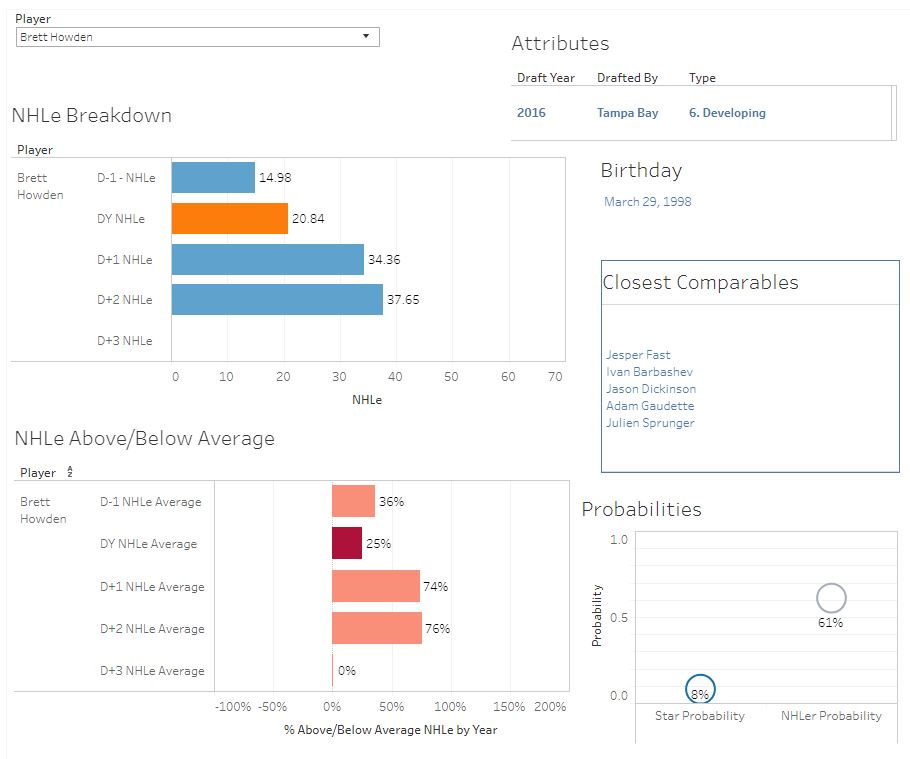 Above visual is available via Byron Bader.

In the end, how Brett Howden will be used starting next season will deservedly draw interest. Due to his tools, Quinn & co. will likely continue to give him chances to determine what he can do with his lauded two-way ability. One area that now seems clear to see success will be a significant improvement in his ability to suppress shots and chances against. Teammates can help in that matter, of course, but as a center a large part of that falls on Howden.