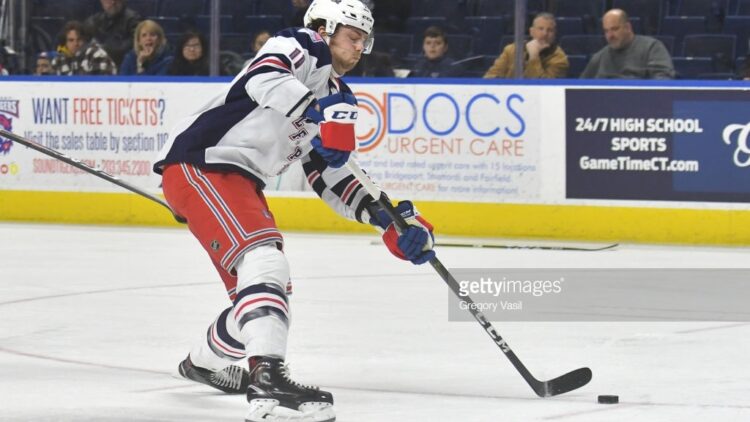 Hartford, CT, March 2, 2019 – Ryan Gropp’s second goal of the game 22 seconds into overtime gave the Hartford Wolf Pack a 4-3 win over the Wilkes-Barre/Scranton Penguins Saturday night at the XL Center.

The Wolf Pack, who were looking to bounce back from a 5-1 loss at Springfield the night before, had seen a 3-1 lead slip away in the third period. The Penguins tied the score on a power-play goal by Jimmy Hayes with only 2:37 left in regulation, and the Wolf Pack had to kill another penalty after that, but wasted no time in the OT.

John Gilmour, who had a goal and two assists in the game, knocked the puck away from Ben Sexton in the Wolf Pack zone, and sent Gropp and Gabriel Fontaine away on a 2-on-1. Gropp carried down the left side in the Penguin end and used Fontaine as a decoy, moving towards the middle and ripping a shot over the stick-side shoulder of Wilkes-Barre/Scranton netminder Tristan Jarry (28 saves).

“It feels really good, obviously a big win for our team,” Gropp said. “We just look to keep getting better here.

“The last month I’ve been playing my best hockey. I’m learning as I go and it’s been fun.”

“Over the years I know it takes time for players to develop, and Ryan Group is a great example of that,” said Wolf Pack head coach Keith McCambridge. “Ryan has taken grasp of his career and is playing the game the right way, getting net-front, using speed to create scoring chances, shots on goal. I like where he is going.

“I thought the group responded well after last night’s loss. I thought all the pieces, all four lines and goaltending, was pushing in the right direction tonight.”

Wilkes-Barre/Scranton got the jump early, opening the scoring only 1:27 in on a goal by Joseph Blandisi. Anthony Angello carried the puck down the right side in the Wolf Pack zone and fed it towards the middle. It deflected off of Sam Miletic’s stick and found Blandisi at the left side the slot, and he wired it inside the goal post to the left of Wolf Pack goaltender Brandon Halverson (31 saves).

Hartford would respond with the next two, though, tying the game just 1:48 later, at 3:15. Steven Fogarty and Gilmour combined to work the puck to Gropp at the left hash mark in front of the net, and his forehand shot beat Jarry on the stick side.

The Wolf Pack then took the lead at 12:09, with Ty Ronning’s fourth goal in 14 AHL games on the year. Julius Bergman passed the puck from the right point to Brandon Crawley at the opposite point, and he snapped a shot that Jarry stopped with his left pad. Ronning crashed the net and found the rebound, though, and banged it in from close range.

Gilmour made it 3-1 Wolf Pack only 1:38 into the second period, one second after an interference penalty to Kevin Czuczman expired. After Fontaine won a faceoff in the Wilkes-Barre/Scranton zone, Darren Raddysh fed the puck from the right point to Gilmour at the top of the left circle, and his drive went through a Matt Beleskey screen and past Jarry’s glove side.

That would be the only scoring in the middle frame, and the Penguins would stop the run of three straight Wolf Pack goals by cutting the lead to 3-2 only 39 seconds into the third period. Sexton got his stick loose in front of the Hartford net and, on his backhand, deflected a pass from the right-wing boards by Chris Wideman over Halverson and up under the crossbar.

The Wolf Pack came close to nursing the one-goal advantage through the rest of the third, but Halverson gave the Penguins some life with a delay-of-game penalty at 17:12, after he covered the puck well out of the goal crease.

Only 11 seconds into that man advantage, Hayes tied the game with a shot from the right side of the slot. Blandisi started the play with a pass from the half-boards to Jarrett Burton along the goal line, and he quickly put the puck on Hayes’ stick.

Raddysh took another penalty only 33 seconds after Hayes’ goal, but the Wolf Pack were able to kill off that tripping minor, setting the stage for Gropp’s overtime winner.

The Wolf Pack and Penguins play a rematch this Friday night, March 8 in Wilkes-Barre, with faceoff at 7:05 PM. All of the action of that battle can be heard live on News Radio 1410 AM, and 100.9 FM, WPOP, and on-line at www.newsradio1410.com and iHeartRadio. Video streaming is available at theahl.com/AHLTV.

The next home game for the Wolf Pack is next Sunday, March 10 vs. the Hershey Bears at 3:00 PM. That is another chance to take advantage of the Wolf Pack’s “Click It or Ticket Family Value Pack”, which includes two tickets, two hot dogs and two sodas, all for just $40.