Let’s take a moment to laugh at the Islanders 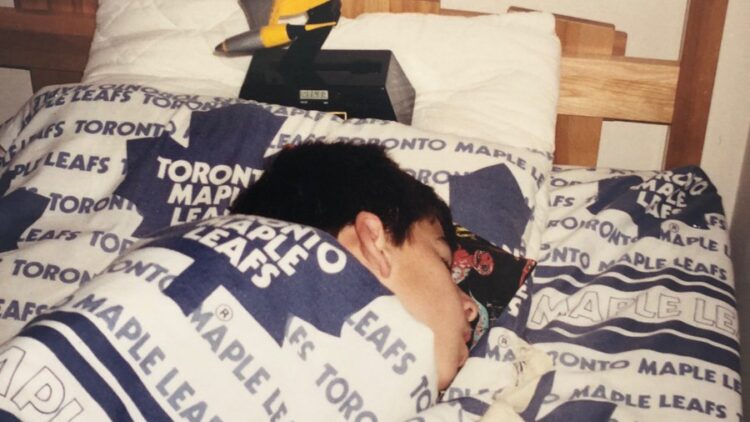 Ahh, Twitter. The advent and progression of Twitter, and social media as a whole, has certainly changed the course of sociology, specifically how humans receive and process information. Hockey fans, for instance, would have had to take a sick day to stay tuned to NHL Network (I actually was sick and still don’t recommend this) during the trade deadline on Monday to find that their favorite Hayes was traded. Instead, all we had to do was follow Bob or Darren or Elliotte on Twitter to see which conditional pick we were getting for whom.

But shockingly, we’re not going to discuss the pros and cons – of each, there are many – of social media here. Instead, let’s focus on one specific hot ticket item that was handed to us on a silver platter yesterday thanks to News 12 Long Island and the hilarious hashtag #DearJohn. Presented without comment (yet):

There is undoubtedly a lot to unpack here but first – L O FREAKING L. I mean, are you serious with this?

Now, this could just be a brilliant PR move by my beloved News 12 LI, the public access network that used to let a very young me know whether or not I had a snow day (back in the day that you had to wait for your school district to scroll past alphabetically, particularly painful for a ‘P’ school after all the ‘Our Lady of’ schools). Really, the #DearJohn hashtag went berserk and that painful video got 86,700 views as of 8pm last night. There was reference to a longer, 3 minute version of the video which undoubtedly got more hits to LI’s News12 site than your usual day.

Let’s examine just how mental this is. The transcript, for your reference: 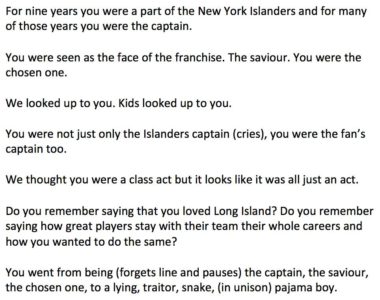 I don’t know where the sense of entitlement comes from, cause as a Long Island native I can assure you we don’t expect much from our sports teams, but good lord. First of all, kids should look up to Tavares. He played exceptionally well on teams that didn’t seem to want to do much. He maintained a straight and narrow lifestyle despite being a bonafide millionaire in an atmosphere where rich men in his position (COUGH KANE) abuse their money, fame and lifestyle. He got the chance to play for his childhood team. We all lauded Kevin Shattenkirk for coming to the Rangers; imagine some nasty Avs, Blues, or Caps fans giving him hell for doing so? Since when does talent mean you have to suffer a lifetime of losing? Paging Connor McDavid!

Secondly, the whole loving Long Island thing is insane because the team’s been mismanaged and playing primarily in Brooklyn for the past few years. During a winning season, their fans still aren’t even sure where they’re playing. I asked my lifelong Isles fan brother if he was going to see them play at the Coliseum a couple of weeks ago and he responded he didn’t even know they were playing there. I mean, hello.

Third, and possibly most hilariously, pajama boy??? A- it was his bedsheets and B- why are we trash talking pajamas? Pajamas are wonderful. I come home from work and all I want are my damn pajamas. Give it a rest.

Now, I guess I could imagine being salty if my team took a horrible turn for the worst as a result of my captain leaving, but let’s check in on the standings: 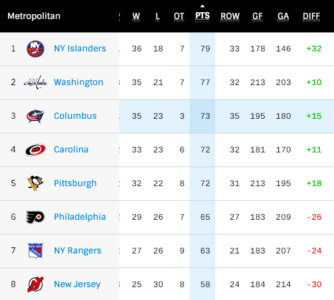 Would you look at that? First place! What a treat for a team that lost an #elite forward in the offseason. So why exactly are the fans making total fools of themselves, crying for a player who made the choice to play elsewhere? It’s actually impressive that a select group of fans can manage to embarrass the fanbase even while their team leads the Metro Division.

Lastly, and perhaps most disconcerting, is that the legacy of Long Island bagels is being tested now thanks to the little brother of bagel shops, Bagel Boss. To give you a feel for Bagel Boss, they’re the deli that was 24 hours so you’d only go when you were really in some distress, like wasted at 2am and in the dire need for some carbs. Bagel Boss is a 2am visit, not a 9am. They’re effectively the booty call of bagel shops. And subpar bagels aside, this is why:

.@donaldrosner & @BagelBossUSA ain't messing around when it comes to John Tavares' @NHLRevenge RETURN to the ISLAND.

That’s right, it’s a giant 91 with a slash through it.

Honestly, cancel the Stanley Cup Finals this year – the true entertainment will come this Thursday night when whiny Isles fans get to host the Leafs, and hockey fans everywhere get to laugh about it.