Quick thoughts on the Zuccarello trade 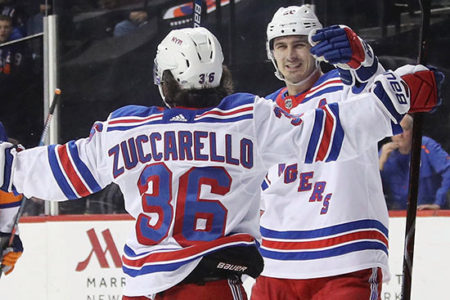 The Rangers traded one of their more beloved players in recent memory yesterday, and the reactions were a wide variety of positivity and frustration. I’m going to hold off on a big post until Monday, mostly because the Rangers play this afternoon, but I have some general thoughts.

1. The return seems underwhelming, but it’s likely the best deal they could get. The return shows what 31 year old winger who, before January and February, wasn’t playing well. He’s a UFA winger with no term. The emotional value of Zucc was worth more to fans than his actual trade value. That’s par for the course for the most part, as fans always inflate the value of their own players and prospects.

2. That said, the return can be significant if Dallas gets a good draw and wins two rounds. The West is wide open, so this isn’t out of the possibility. Zucc re-signing there is a possibility as well.

3. It’s not like Jeff Gorton was turning down other trade offers that had all these picks and prospects in it. Pundits said he’d get a 2nd and a B prospect. That’s basically what this return is. I don’t get the outrage. Retaining 30% of the salary? Being angry at that is silly. It doesn’t mean anything to the Rangers.

That’s it for now. Keeping this short so I can digest the trade a little more and get a less-emotional response to it.