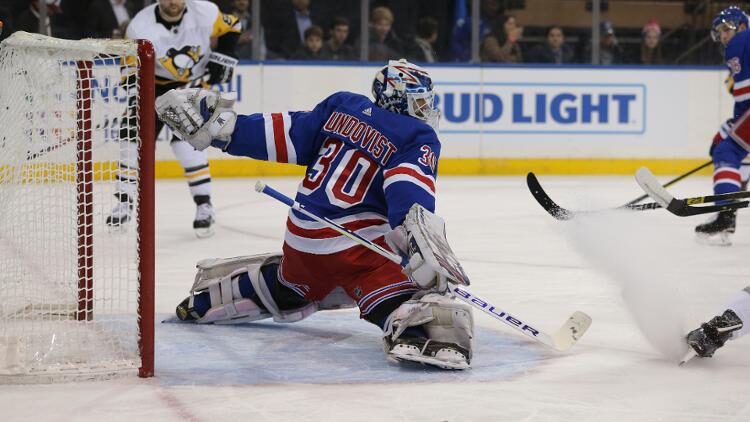 After reviewing the defense and the bottom-six forwards, it’s time to move on to the trio of goaltending, front office, and coaching. We pack these three together because there’s only two goalies and one GM to grade, so bunching them with the coaching staff as a whole seems to work. There’s no real parameters here, like we had with the bottom-six forwards. So let’s jump right into it.

At first glance, Lundqvist’s numbers are pedestrian. And let’s face it, they are, at least at first glance. Lundqvist is no longer able to keep the Rangers in games and steal games for them as often as he used to. Part of me knows it may have to do with his age, but the majority of me wants to blame it all on the poor team in front of me and that’s what I’m going to do.

In all seriousness, Lundqvist is the only reason why the Rangers went on that crazy stretch in October/November. He’s obviously come back down to Earth in a major way.

This top chart from Sean Tierney (starting goalies) is reflective of Lundqvist’s season-long impact, and for the first time in his career, he’s actually on the negative side of goals saved above expectation (GSAA). It’s worth noting two things: First is that the entire league has seen poor goaltending all year. Second is that Lundqvist is in the upper echelon in terms of pure shots faced. The Rangers are horribad defensively, and hemorrhage shots left and right. I was a goalie, so I always say you never blame the goalie. I stick by it, but can’t give Hank an A anymore. Grade: B+

Georgiev’s numbers are pretty rough, and he’s either been brilliant or bad, with no real middle ground. Georgiev has allowed 4+ goals in seven games this year. He’s also allowed two or fewer in five of his starts. He allowed three goals in one start. So you never really know which Georgiev you’re going to get this season. When he’s relieved Lundqvist (three times), he’s been somewhat decent, if that means anything.

Based on Tierney’s bottom chart from the tweets above, Georgiev also sees more than his fair share of shots. He’s also on the wrong side of GSAA. It’s been a rough year for him. It’s very difficult to judge backup goalies on a bad team. I’m going to play it safe with this grade. Grade: C

Jeff Gorton and the front office

I’m going to judge Gorton based on his moves from camp/preseason through now. We spoke enough about his offseason moves, and I don’t want to re-hash that here. Gorton has made two moves of significance since September. The first was sending Steven Kampfer, a 4th rounder this year, and a conditional 7th rounder this year to Boston for Adam McQuaid. The second was exchanging Ryan’s with Edmonton, sending Spooner and salary to the Oilers for Strome.

The first deal was a head scratcher then, and is still a head scratcher. The only saving grace will be if McQuaid gets a third round pick at the deadline. If that happens, then great. If not, then that’s a bad trade.

The Spooner/Strome swap was a great trade, even if Strome doesn’t continue his surprisingly good play. Spooner is now in the AHL. Strome has solidified a bottom-six role with the Blueshirts. That’s a major win. Grade: B, but an A- if McQuaid gets a 3rd or more.

David Quinn and the coaching staff

I’m sure you’re expecting a rant on lineup decisions. But you know what, I’m not going to get into that. I’m discouraged by Pavel Buchnevich’s usage. Neal Pionk is getting way too much playing time. I’d like to see Kevin Shattenkirk back on PP1. But honestly, that’s all I really have a gripe about. And they aren’t even extreme gripes, more preferences for either growth, sheltering, or trade value.

The biggest concern for me is the system, specifically the defensive zone system, that Quinn uses. The in-zone coverage is fine, if a bit more on the passive side than we are used to. Quinn runs a 2-1-2 in-zone, but there’s been some issues in execution lately. The system is simple and goes back to Hockey 101, so the execution part is on the players. I’ve come to live with that until the blue line gets more agile.

It’s the zone entry defense that gets me. The Rangers, in an attempt to limit the quality chances against, give up the blue line regularly. It works, in the sense that the Rangers are limiting the majority of the chances to the outside. However it doesn’t work because they concede the zone entry and wind up on their heels while the puck is still in the neutral zone. This leads to long times in the defensive zone. It’s by design, and I’m hoping that with more agile defensemen comes a better blue line tactic. Hoping.

Compounding the issue is that the Rangers still can’t generate any sustained offense. They generate quality chances, but it’s one-and-done in the offensive zone. More of the same there. Grade: C+