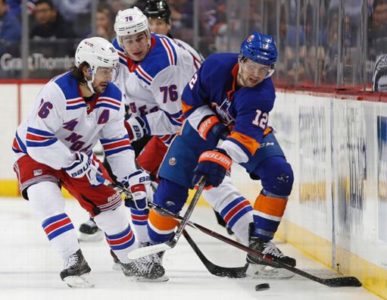 It’s that time of year again, and we get to grade the performances of the various groups in the Rangers. We decided to tackle the easiest of the bunch right now, the defensemen. They are the easiest because, well, they all pretty much have stunk this year. There’s no other way around it.

Some of the stink can be attributed to learning a new system, and some of the stink can be attributed to the system itself. The Rangers are actually halfway decent at limiting quality chances against, keeping opponents to the outside. But they give up the blue line in order to achieve this, which makes long, sustained pressure in the defensive zone unavoidable. Since the entire team is terrible with CF% –which isn’t even the best stat to really use– I’m going to focus on xGF% when looking at numbers beyond the stat line. Let’s get to the players.

Skjei was inked to a shiny long term deal this offseason, and has struggled mightily so far. He looks out of place, his skating actually looks timid and slow, and he’s just not the same guy. His xGF% of 4.59% is ahead of only Neal Pionk. It’s been a rough start to the David Quinn era for him. Skjei has mostly been paired with Adam McQuaid, who isn’t really ideal. He and Tony DeAngelo played together for a good amount of time as well, with equally poor results. Part of the problem is finding a good partner for Skjei, which hasn’t happened yet. But most of the problem is, simply put, Skjei has been underperforming. Grade: D

Pionk started the season incredibly hot, with six assists in seven games to start the year. It masked some of his very poor numbers, but since he was producing, it was overlooked by most. However Pionk’s 5-15-20 line looks a lot worse when you realize he hasn’t scored since 12/22, and before that 11/21. Since that 11/21 game, he has a line of 2-5-7. So his production has fallen off a cliff, which makes his 44.07 xGF% even more glaring. Pionk is still pretty good with the puck, especially on the powerplay. He has great vision. But he’s really not that good at anything else, and is struggling even more than Skjei. He’s still in his first full season, so there’s hope some of it can work out. But he needs to improve significantly. Grade: C

DeAngelo just can’t stick in the lineup, and that is a little frustrating. There is an issue with perception, since his on ice production is better than Pionk’s, but people prefer Pionk. While we don’t know anything about his attitude and how that has changed (or if), we do know that his discipline is an issue. He’s got great offensive talent, but he is outperforming his xGF% (47.52 xGF%, 56.00 GF%), so there is a regression coming. He’s been clicking with Marc Staal recently, as odd as that sounds. He’s certainly earned more playing time over some of the underperforming veterans. At the very least to see what he can do and if there’s a future for him here. Grade: B-

Boy what a disaster it’s been for Shattenkirk. He played through a torn meniscus last season, and it’s clear he hasn’t been the same since the injury and surgery. He’s slower out there, he’s less agile, and he’s timid on the ice. With that, he’s lost his PP1 time to Pionk and then to a five forward combo, so his ice time is down. Shattenkirk, as expected, has the best xGF% numbers on the team (49.77%), but he’s being propped up by a few very strong games, overshadowing his overall poor performance. It’s not an effort thing, he hasn’t been the same since that injury. It shows. Grade: D

The Rangers picked up McQuaid (for Steven Kampfer, a 4th rounder, and a 7th rounder for some added toughness in the lineup. And McQuaid does his job there. The problem is that’s not good enough for the NHL anymore, and you need to be able to do more than just stick up for teammates. He’s very slow, and getting beat on rushes regularly. When that happens, the defense winds up out of position and slot line pass opportunities open up. The puck is a grenade on his stick too, but that was expected. I didn’t have high expectations for McQuaid when he came in, and his greatest value to the team will be the eventual third round pick the Rangers get for him. Grade: C

What a disaster this Smith deal has been. He’s just been all around bad. There’s nothing else to really say about this. However in third pairing minutes, he’s been somewhat productive? I guess? His xGF% is 47.72%, and he’s been much better when propped up by Shattenkirk or Fredrik Claesson. The team is going to have to ride this one out, unfortunately. Grade: D+

Staal has been experiencing a muted “revival” this season. Revival is being loosely defined here, since there weren’t many expectations from him to start the year. But he’s been…decent? He’s been playing well with DeAngelo, and has been somewhat steady. The system certainly helps, as his best strength was keeping players to the outside. With the Rangers conceding the blue line, he can back up and do just that. I guess low expectations leads to pleasant surprises? But hey, I’ll take it. Just keep him and Pionk away from each other please, that pair is the worst on the team, and it’s not even close. Grade: B.

I can’t understand why Claesson can’t stay in the lineup. He’s been nothing but solid and quiet, which is a compliment for this team. He makes a good first pass, and actually does a good job in all three zones. He’s been arguably the best defenseman on the team, which says a lot about the state of this blue line. Grade: B