Pack come out on losing end of wild night with Springfield 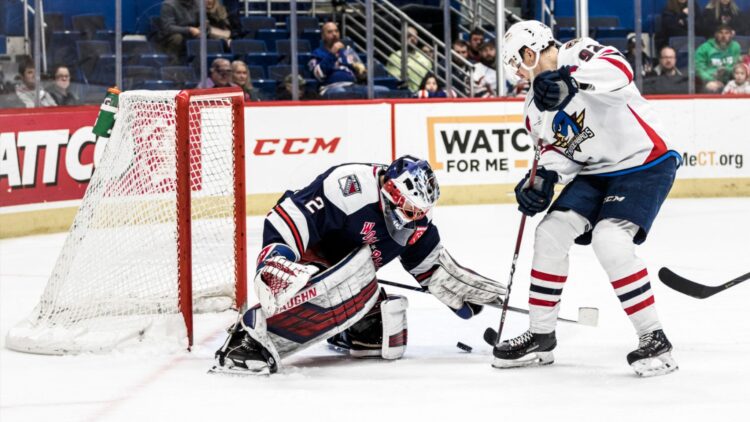 Hartford, CT, January 23, 2019 – Paul Thompson scored four goals, including a natural hat trick in the third period, Wednesday night at the XL Center, leading the Springfield Thunderbirds to a 7-4 win over the Hartford Wolf Pack.

Harry Zolnierczyk added a goal and two assists for Springfield. Steven Fogarty had a goal and an assist for the Wolf Pack.

After a wild first period, in which the teams combined for seven goals, the game was tied 4-4 going into the third.

“Both teams obviously had goals back and forth in that first frame,” Wolf Pack head coach Keith McCambridge said. “Third period with 12 minutes left in the game, 4-4 game against a divisional opponent here, those are games you’ve got to find a way to make sure that you’re taking care of pucks and finding ways to score goals.”

The third belonged to Thompson, starting with what turned out to be the game-winner at 8:30. Zolnierczyk lobbed the puck up in the air and over the Wolf Pack blue line, and Thompson jumped behind the Wolf Pack defense and grabbed it. He moved in alone and snapped a shot past the catching glove of Hartford goaltender Alexandar Georgiev (29 saves).

Then, after the Wolf Pack were unable to convert on a 45-second two-man advantage, Thompson scored his hat trick goal on a Thunderbird 5-on-3 at 10:17. Zolnierczyk took a pass from Chris Wideman at the right point and zipped a feed across the middle to Thompson at the far goal post, and he easily put the puck in.

“It’s unfair to [Georgiev],” Fogarty said. “He comes down here, and when you play like that it’s not fair to him. And he shouldn’t hang his head because he gives us a chance every night, and it’s on the players to be better in front of him.”

Thompson’s fourth of the game was an unassisted empty-net goal, on another power play, at 18:33, with Chris Bigras in the penalty box for high-sticking and Georgiev on the bench for an extra attacker. Thompson grabbed the puck along the boards in his own end, and was almost to the corner before he slung it all the way down the ice and into the open goal.

The offensive fireworks in the first period started with both teams scoring within the first 1:42, and Springfield opened the scoring only 50 seconds in.

Juho Lammikko intercepted a Bigras pass at the top of the left circle in the Wolf Pack zone and fired a shot that Georgiev stopped. Anthony Greco jumped on the rebound right in front of Georgiev, though, and swept it into the net.

The Wolf Pack responded at 1:42, scoring on their first shot of the game against Chris Driedger (34 saves), who had shut the Wolf Pack out on Saturday night, in a 3-0 Springfield win.

A Ville Meskanen feed sent Sean Day down the right side in the Thunderbird zone, and he passed across the slot to his defense partner, Rob O’Gara, who redirected it into the goal. The assist was Day’s first career AHL point.

Hartford went in front at 5:16, as Fogarty played the puck to the slot from behind the net and Lias Andersson buried his own rebound.

Just 65 seconds after that, however, at 6:21, Thompson started his big night by tying the game back up. Stationed in front of the Wolf Pack goal, Thompson deflected a shot from the left point by Ludwig Bystrom inside the goal post to Georgiev’s left.

Zolnierczyk then made it 3-2 in favor of the Thunderbirds at 13:51, on a very similar play to that on which he set up Thompson for the third-period winner. Dryden Hunt flipped an aerial pass into the Wolf Pack zone to Zolnierczyk, who was behind defense, and he cut toward the middle from the right side before lifting a shot past Georgiev’s catching glove.

The Wolf Pack’s John Gilmour got that goal back at 16:22, with his 13th of the season. Shawn St. Amant led Gilmour into the Springfield zone down the right side, and Gilmour put a perfect backhander into the top of the net.

Springfield’s league-leading power play cashed in on the first man advantage of the game, though, at the 18-minute mark, after Andersson was called for hooking at 16:34.

Tomas Jurco got the goal that put the Thunderbirds back in front, his third tally in four games since signing with Springfield. Greco missed on the rebound of a Sebastian Repo try in the slot, but Jurco found the puck at the left-wing side of the goal mouth and jammed it in.

After all that scoring, it took more than a full period for the next goal to be scored, and that was a tally by Fogarty at 18:33 of the second period, on the Wolf Pack’s first power play.

With Zolnierczyk in the penalty box for high-sticking, Vinni Lettieri threaded a pass from the right point to Peter Holland on the left point, and fed to Fogarty, who knocked it inside the post to Driedger’s left.

The Wolf Pack’s next game is this Friday night, January 25, when they travel to Binghamton to take on the Devils. Faceoff is 7:05 PM, and all the action can be heard live on News Radio 1410 AM, and 100.9 FM, WPOP, and on-line at www.newsradio1410.com and iHeartRadio. Video streaming is available at theahl.com/AHLTV.

The next home action for the Wolf Pack is this Saturday night, January 26, their last game before the AHL All-Star break, a 7:00 contest vs. the Charlotte Checkers. The Wolf Pack will be holding a “Halfway to Summer” luau at that game, with the team wearing special Hawaiian floral-print jerseys, which will be auctioned off to benefit the Channel 3 Kids Camp. Also, the first 2,000 fans will receive a free Wolf Pack baseball cap, presented by CT-DOT.