The Rangers and the Pavel Buchnevich conundrum 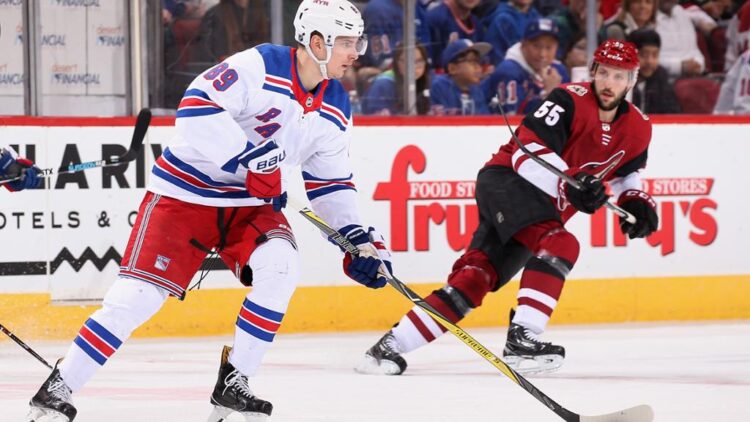 Pavel Buchnevich was the first hyped prospect the Rangers have had in quite some time. With KHL scoring rates comparable to those of Evgeny Kuznetsov and Vladimir Tarasenko, the Rangers appeared to have struck gold with their third round pick. However through three full(ish) seasons, the 23-year-old winger is averaging just 0.5 points per game while being seemingly unable to hold down a top-six spot.

Injuries derailed Buchnevich in his rookie season, as a lingering lower body injury cost him much of the early going. Last season there was a concussion. This year a broken thumb. Just as Buchnevich seems to get it going, someone goes wrong. It seems that there are no linger effects from his injuries, but it certainly can disrupt someone’s development.

While the injuries can be a concern, perhaps the biggest issue is that under both Alain Vigneault and now David Quinn, Buchnevich has been unable to stay in the top-six regularly. Buchnevich has been a healthy scratch on numerous occasions, and has spent a good amount of time on the fourth line as well. There has to be a good reason for this, or at least that’s what we hope.

First things first, let’s just look at the stats. It is a valid argument that 0.5 PPG is not a top line player. When looking at average ice time at even strength per game, Buchnevich is 7th among forwards at 12:27. At all strengths he drops to 9th at 14:30 per game, but that’s likely because he doesn’t play on the PK. So all in all, he’s averaging 12:30 at evens and 2:00 while up a man. That’s up about 30 seconds/game (one shift) at evens under Quinn, but down 30 seconds overall. Again, that’s likely due to the fact the Rangers spend half the game on the PK lately.

The concerning thins with Buchnevich is that his points/60 is plummeting big time at even strength. He went from 2.19 P/60 in his rookie year to 1.61 P/60 this season. His goals and primary assist numbers aren’t fluctuating that much, but his second assist numbers have dropped significantly each season. Secondary assists are almost impossible to predict and are usually just considered “noise” by stat folks. However it’s tough to ignore such a drop, since it has significantly impacted Buchnevich’s raw stat lines.

That 1.61 P/60 line is good for 6th on the club (omitting Matt Beleskey and Boo Nieves here, for sample size reasons), with noted offensive threats Jesper Fast and Jimmy Vesey well ahead of Buch. Regardless, that’s still top-six. It is worth nothing he is ahead of guys like Brett Howden and Filip Chytil.

Hockey is a three-zone game, so it’s not just about stats. The Rangers are an absolute train wreck when it comes to possession, so we really need to look at play relative to the team, and not raw possession numbers. Buchnevich is one of seven forwards with a positive relative CF% (0.73). He’s ahead of Vesey and Howden in this category, but behind, in order: Kreider, Hayes, ZIbanejad, Zuccarello, Chytil, and Fast.

When it comes to a stat with a little more meat on its bones, we look at relative xGF%, which has Buch in 6th on the Rangers with a rel xGF% of 0.37. He’s well ahead of Vesey here, but well behind Chytil. Worth noting that Howden is second to last on the team here, with only Ryan Strome behind him.

For what it’s worth, Buchnevich’s giveaway/takeaway stats were neutral, as was his penalty differential.

So what does all this mean? It means we have a player who is tremendously skilled, but may be struggling with confidence. Quinn was hired specifically to address these sorts of situations, yet Buchnevich has seen fourth line minutes in his past four games, surpassing 10 minutes of even strength time just twice. He saw a season low of ice time against the Islanders, and Sunday’s Columbus game was his third lowest TOI.

It’s no surprise that Buchnevich is struggling. However we are at the point where the Rangers are in a full blown rebuild, and Buchnevich is a key cog to the future of the team. Even if he isn’t an elite talent, ensuring he can contribute in top-six minutes is vital to keeping this rebuild short. Yet here we are, talking about how Buchnevich isn’t getting ten minutes a night in recent games.

This could just be a poor stretch of play. Everyone has them. But at some point, Quinn will need to commit to Buchnevich in the top-six, or at least the top-nine, to see what they have in him. Once that commitment happens, Buchnevich will need to produce. This is certainly a two-way street, but there needs to be a leap of faith first.

This is a rebuild. It’s time to start playing the kids that will be here in the future. And if there is uncertainty, play those question marks and make your decision. There are no half measures.