One year ago, the New York Rangers were preparing to play in the Winter Classic against the Buffalo Sabres. Looking back, that game ended up being the swan song for the AV-era Rangers. It also produced one of the great hockey photos of all time: 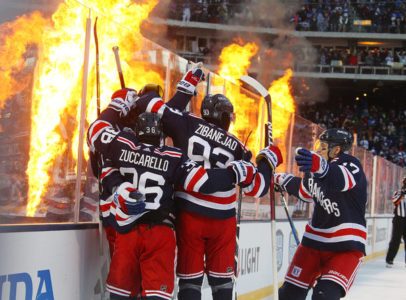 JT Miller’s overtime winner in that game was perhaps this franchise’s last true high point. What followed was a miserable January and the infamous White Flag letter from the front office to the fanbase in February. 2018 was a year of resetting and refreshing for the Rangers, as they embarked on the long and indefinite journey of a rebuild.

As we usher in 2019, the BSB staff offered up some New Year’s resolutions for the team.

Becky: Stop with the OT games, for the love of god.

If you’re going to lose, lose in regulation, please. And if you’re going to win, that’s great! I don’t root for tanking. That said, these OT games are giving us all needless agita. This is supposed to be a season of low stress and even lower expectations. I’ve enjoyed the Rangers more this year, but the late-game collapses are starting to test my patience. Plus, extra points in losses don’t do anyone any good.

The Rangers are fooling themselves if they think they’re a playoff team. 2019 will only be a valuable year if the Rangers make roster decisions that make sense for the long term. Simply, this means getting young players as many meaningful minutes as possible. Rather than scratch Filip Chytil, scratch Ryan Strome. Rather than force-feed minutes to Marc Staal and Brendan Smith, get Freddie Claesson into the lineup more regularly. Wins and losses are secondary to development, and the Rangers need to fully commit to that idea in 2019.

Jeff Gorton should swing for the fences, bring home the bacon (meaning a sweet prospect and/or first round picks) and bump some guys up the depth chart while giving the kids time and space to develop. I’d love it if we could make a blockbuster deal to bring home something sweet, and it’d be all the better if we could get some room in the lineup for guys like Andersson, Claesson, and so on to learn and grow. Also, eat better, go to the gym, read more, whatever other crap people make New Year’s resolutions about, I don’t know.

We’re now going on four years in a row of bad defense from this team. Coaches, personnel and systems have all changed, but the poor defense has persisted. It’s amazing Henrik Lundqvist wanted to stick around through this rebuild, considering all the rubber he faces on a nightly basis. Maybe it’s fun for him? Either way, I’d like to watch some games in 2019 that don’t involve the Rangers getting badly outshot and out-chanced. Is that too much to ask for?

Thanks again to all of you for another great year here at Blue Seat Blogs. On behalf of the entire staff we wish you a safe, happy and healthy 2019. And as always: Let’s go Rangers!