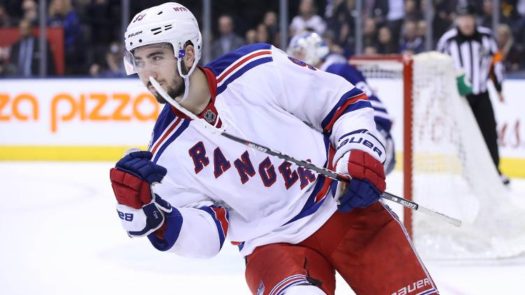 Folks, we’re a week away from the New Year, and that means something important in Rangerstown: the roster freeze will be lifting and trades can be made once again. Hopefully, Gorton has been working the phones in the holiday season, and has something cooking to bring home legit assets to help improve and even expedite this rebuild. I’m of the opinion that it can be done, and I’m almost positive there’s an easy way to do it: that’s right, it’s time to trade Mika Zibanejad.

There’s a petty reason for my desire to do this, and it has to do with Kevin Hayes. We’ve been re-litigating this whole Hayes thing for months now, and it’s about as exhausting as rehashing about the last (or anticipating the next) presidential election. An easy way to solve this problem would be to trade Mika Zibanejad and extend Hayes. Seems simple enough, and of course putting an end to nonstop and exhausting internet debate is as good of a reason to make a trade as any.

There’s a real reason here, and it has to do with our logjam at forward, and the necessity of opening up room for youngsters to move up the depth chart. Asset management wise, Kevin Hayes is on a one-year deal and will likely pick up less on the trade market than Zibby, and here’s my real, no joke hot take to drop on you all this fine Boxing Day: Kevin Hayes is better than Mika Zibanejad and will help this team succeed long term in a way that Zibanejad just won’t.

Let’s talk about the biggest reason to keep Kevin Hayes – he makes everyone around him better by either scoring or setting up goals immediately. To date, he’s played 345 regular season games, notching 145 points at even strength in that time (0.42 points per game at 5v5). The number of those that are primary points are staggering – 117 are primary points. That’s slightly over 80 percent, which is uh, pretty good odds for putting the biscuit in the basket when he looks like he’s cooking something up. We’re not even taking into account points on the man-advantage either.

Mika Zibanejad, by contrast, has played 163 games with the Rangers and scored 55 points (.34 points per game at 5v5), of which 38 have been primary helpers or goals themselves. That comes out to 69% of his points being finishers or about-to-be’s, which, while still impressive doesn’t quite come to the level of Hayes.

I’m also going to drop two charts on you but recommend you go to Sean Tierney’s Tableau account to check out tings out for yourselves because you can mouse over each individual shot, which is extremely cool. Here goes nothing. 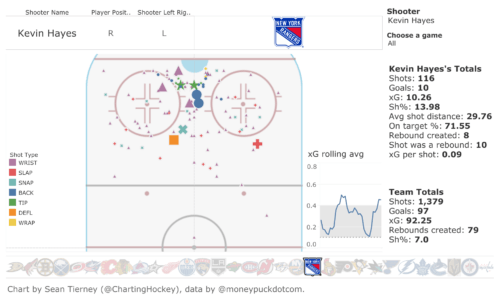 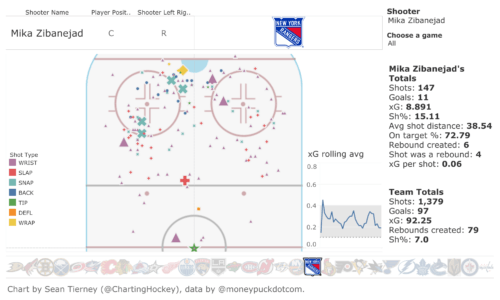 The most notable thing to me here is the expected goals per shot, as well as the shooting percentage. Hayes generates almost 0.10 expected goals per shot, which means if he takes ten shots one of them is going in almost guaranteed. Zibanejad’s, meanwhile, is much smaller – two thirds of Hayes’s 0.09 – and his shooting percentage is 2% higher. This says to me that Zibanejad’s scoring is inflated beyond what Hayes’s is, but that Hayes’s chances are higher quality. Sounds like we’ve got two real deal 1C’s on our hands, but only enough room to keep one.

There’s a better reason to trade Zibanejad though, and that’s his contract. I already mentioned that Hayes’s rental status is going to depress his trade value, but Zibanejad is signed long term. Some similar players, via CapFriendly, who I think most teams would prefer Zibanejad over until 2022, are Ondrej Palat, Nino Niederrereiter (probably the only guy I would take over Zibby, and even then it’d be close), Jason Zucker, JT Miller (remember him?), and Tomas Tatar. There’s a whole list of guys who are making more money too, and I’m sure teams might rather have Zibanejad at $5.35m than Matt Duchene at $6m or Tomas Hertl $5.625. The market value for a center is only going up, and right now Zibanejad’s value only increases as the going rate increases. Under-market-value scoring is going to take home a haul long-term, and that’s perhaps the best reason to trade him.

Hayes meanwhile is only going to get more expensive as time goes on – the moment to sign him was yesterday, but if we could lock him down at $6m per it’d still be either perfect market equilibrium or even below market price. You guys know Logan Couture? He’s played 189 games in the past three season we looked at for Zibanejad, 72 even strength primary points out of 82 (87.8%), and costs $8m per year starting next season. Yeah, at the margins, I’ll take Hayes surround by some young guns, thanks.

Lastly, and this is purely subjective, but I have a hunch that Kevin Hayes’s playmaking and vision is going to age a bit better than Mika Zibanejad’s speed and slapshot. The former skill set can set up clean exits and entries, quarterback long cycling plays that wear teams down, and, as we’ve already gone over, really make it easy for guys to score. Speed and a wicked slapper can do you well too, but Mika also has a history of injuries and won’t be as much use when he slows down and loses a little bit of heat and precision on that shot of his. It’ll be a tough decision to make given the excitement he brings to the team, but Hayes surrounded by young gun wingers in front of a column of center depth is going to be a force in this league as the Rangers rebound.

I hope I haven’t ruined your holidays with this hot take, but it’s been on my mind. One way or another the Rangers are at an impasse and need to maximize their value. We need young players and draft picks, especially on defense, and the way to do that is to sell high on prime assets. I’m not saying Mika Zibanejad is a bad player, quite the opposite. What I’m saying is that trading Hayes and keeping Zibanejad does this team less good over time than does trading Zibanejad and keeping Hayes. Besides which, I’m sick of arguing about this all the time.