A look at line and pairing success rates through 28 games

The Rangers are currently on a one-week break, so this is a good time to take a step back and assess which lines and pairings have been effective, and which have not. Given the large number of injuries, specifically to the forwards, only five lines and nine forwards have logged enough ice time together to make the charts (courtesy of Sean Tierney).

First things first, this will be in expected goals, not Corsi. It’s a better metric. 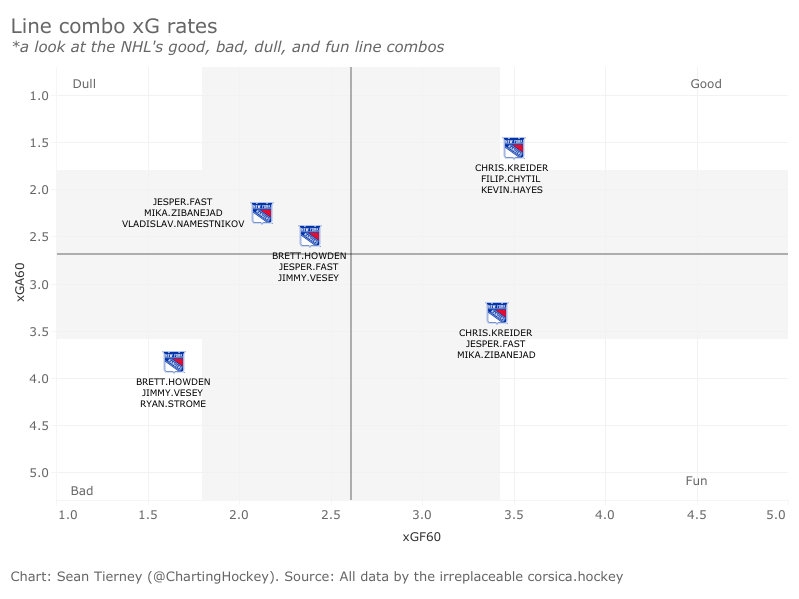 While the lines are most certainly not complete due to injuries, it’s clear the Rangers have one line that is a cut above the rest, and that is the Chris Kreider-Kevin Hayes-Filip Chytil line. That line has been spending a lot of time together lately, and they are just flat out good. On the opposite end of the spectrum is the Jimmy Vesey-Brett Howden-Ryan Strome connection, which has been relatively atrocious. The rest are neither here nor there, but it’s worth noting that Kreider with Mika Zibanejad and Jesper Fast seems to trade chances.

This passes the sniff test, since the Kreider-Hayes-Chytil line has been visibly the best line out there recently. We also enjoyed watching the Kreider-Zibanejad-Fast line when they were together, hence the lower right “fun” section. The injuries to Pavel Buchnevich and Mats Zuccarello have altered what lines we see here. When they come back, I’m intrigued to see what sticks.

As for the blue line, well, that’s ugly. Like….really ugly. 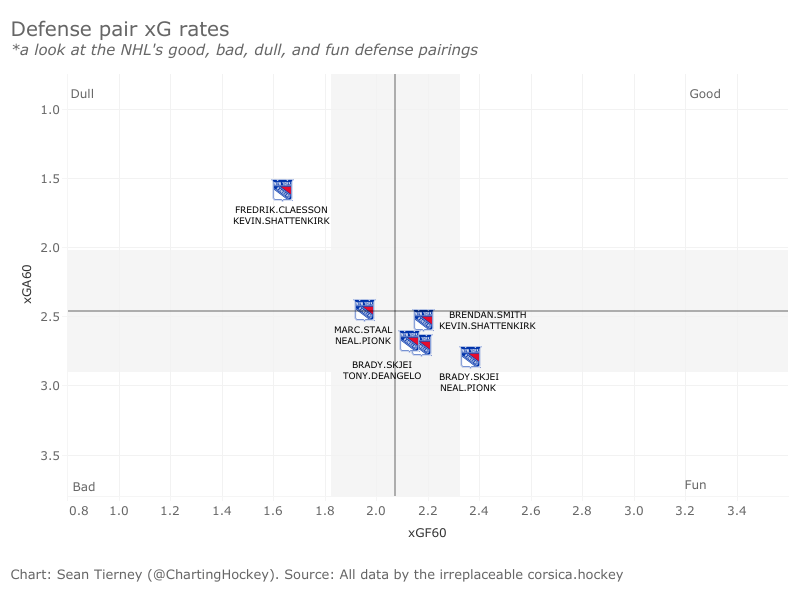 While injuries have decimated the forwards, the blue line has been healthy. The best thing we can say is that the Fredrik Claesson-Kevin Shattenkirk pairing is, at the very least, good defensively. I guess we can say it’s good that no single pairing is in the “bad” section. But there are none in the “good” section either. This is just a mess of mediocrity. On the bright side, they can’t get any worse…probably.

Despite that 9-1-1 run in November –which was fun while it lasted– the Rangers are what they are. We expected them to be mediocre, leaning towards bad. So far the numbers are showing exactly that. The production has been mediocre to bad, with some flashes of good. Sometimes stories aren’t exciting, and the predictions are somewhat accurate.

The Rangers have probably banked enough points to keep them out of the bottom-five in the league, which is probably better than any of us expected. That said, they aren’t a playoff team. As the Rangers sell off more assets, it’s expected that these numbers and results will only get worse. Rebuilds are great on paper, but these are the tough times that were expected.