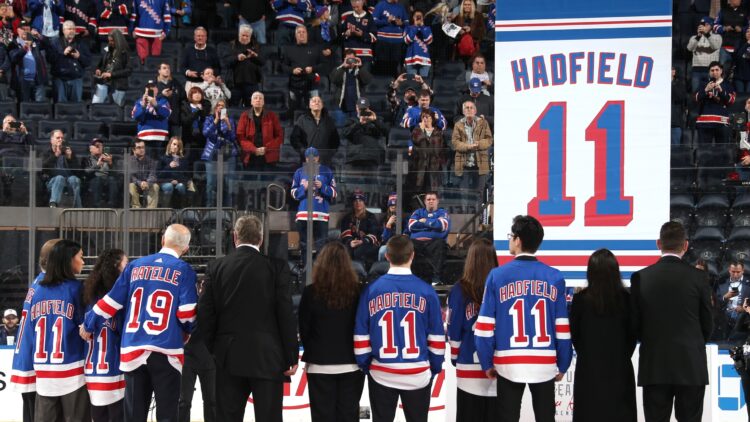 NEW YORK, NY – DECEMBER 02: New York Rangers legend Vic Hadfield watches as his jersey gets raised to the rafters prior to the game against the Winnipeg Jets at Madison Square Garden on December 2, 2018 in New York City. (Photo by Jared Silber/NHLI via Getty Images)

On the night the Rangers raised Vic Hadfield’s number 11 to the Garden rafters, the current Blueshirts were unable to honor him with a win.  Henrik Lundqvist – who will undoubtedly have a jersey retirement ceremony of his own someday – was incredible in this one, but that wasn’t enough, as the Rangers squandered a 3-0 lead and fell to the Winnipeg Jets 4-3 in a shootout.

The Rangers came into this game having lost four out of five, largely because their defensive zone structure had abandoned them.  Through the first two periods, the Rangers corrected some of those faults and limited the Jets’ chances, particularly at even strength.  The third period meltdown undid those small steps forward, and Winnipeg’s superior talent ultimately (and deservedly) won out in this one.  Onto the goals…

Mika Zibanejad and Jesper Fast combined on a pretty give-and-go after Zibanejad exited the penalty box.  The Rangers created very little in the first period, but they made this one count.  The goal was Fast’s second of the year and first since opening night.

After weathering the storm through the first 9 minutes of the period, the Rangers put together a few good shifts in a row and got Winnipeg chasing.  Ryan Strome tracked down his own rebound and threw a no-look pass to Marc Staal down low.  Staal took his time and sniped (yes, sniped!) a wrist shot into the far-side netting.  A pretty goal for the Ranger veteran.

In the lead-up to this goal, the Rangers spent most of their two minute power play fumbling the puck around and failing to get set up.  As the power play expired the Rangers got organized, and Mika Zibanejad fired a shot towards the net that Chris Kreider deftly tipped past Connor Hellebuyck for his 14th goal of the season.

Blake Wheeler fed Mark Scheifele for a one-timer from the slot.  More importantly, the Jets were on the power play because Brendan Smith committed a mindless cross-checking penalty which landed him on the bench for the remainder of the game.  He’ll likely find himself in the “Quinn Bin” (I stole that one from Steve Valiquette who said it on the post-game show; thanks Vally) when the Rangers play again next Saturday.

Just 2:26 after the Scheifele goal, Jack Roslovic let loose a seeing-eye wrist shot that found the back of the net.  Lundqvist was screened by multiple players and the shot was perfectly placed.

Brian Little – Ranger killer since the days that the Jets were known as the Atlanta Thrashers – slammed home the rebound of a Nikolai Ehlers shot.

As the third period wore on, the Rangers were simply unable to deal with the Jets’ consistent pressure.  That continued into the overtime period, where Lundqvist was forced to make 8 more saves, a few of the spectacular variety.  However, he couldn’t stop Scheifele’s shootout winner.

The Rangers did a fairly good job limiting the Jets’ chances from in close.  Per NaturalStatTrick.com, the high danger chances were 8-8 at even strength and 10-9 Winnipeg in all situations.  Still, the Jets dominated puck possession and zone time in this one and they were deserving winners.  Nights like this prove that while the Rangers are capable of hanging in most games, their best effort will often still fall short.

Some unorthodox scheduling means that the Rangers have five days off before their next game.  This is not the league mandated “bye week”, so the the team will be able to practice.  For us here at the blog, it gives us a chance to take stock of the season – and the rebuild – so far.