Quality over quantity, and why the Rangers are winning 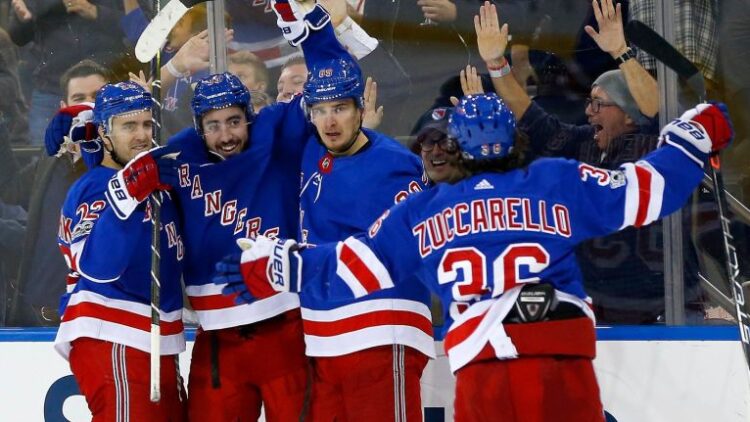 At 23 games into the season, it’s not just Lundqvist anymore. The system is starting to take hold, and the Rangers are showing that they can actually limit the number of chances against. All shot attempts against, both quantity and quality, are coming down. However while the numbers against are coming down, they are still pretty high, and the Rangers are struggling to generate consistent and sustained offensive pressure.

I could've extend the x axis to accommodate the Hurricanes again but I kind of like the story this tells for now. pic.twitter.com/x9tmlKINdo

From Sean Tierney, the Rangers –in terms of quantity– should be a bottom feeder team. They still allow a good amount of attempts against, and don’t generate many attempts for. Yet they keep winning. Why?

Well for starters, we have much better metrics than raw Corsi. It’s a very useful tool still, but when it comes to analyzing a team’s performance, there are better indicators out there. Even so, when we see quantity that low, we tend to look at “puck luck” (PDO) to see what’s going on.

Fun in Ott, dull for Chi, Lak, Bos, and Ana, bad times in VGK, and all the shooting fun for Nyi and Col. pic.twitter.com/q2bS1YiaTu

Here is basically where the Rangers usually are in PDO. They have an elite goaltender, so they will always be above the middle horizontal axis. Early in the season, the Rangers couldn’t buy a goal –that’s when Lundqvist was stealing games– but now the goals are starting to come (see: Chytil, Filip). They are starting to convert, thus have a higher SH%. PDO can account for luck, but there is a specific skill set here, especially at the goaltending level.

So the high PDO may account for the most recent run of wins. And to be frank, it likely does account for a good amount of it. However again, there’s more to the story.

Under Alain Vigneault, the Rangers were all about quality scoring chances. They were generating a ton of them, but were allowing what felt like double against. It was frustrating to watch, and it probably let to a few heart palpitations. This year, though, is a little different.

If you believe, like I do, that generating lots of xG and limiting xG against is a great way to run your hockey team, then you're a fan of:

and it makes you sad to watch:

Expected goals (xG) is a great indicator of how a team is performing. To read the above, let’s keep it simple. Blue is good. Red is bad. The Rangers are blue. They are “expected to score more goals than they allow.” This number takes into account the quality of shots taken on the ice, both for and against, in addition to quantity (remember: CF is quantity only). The Rangers here are one of the better teams.

I resist the urge to change axes too quickly, which sometimes help show things like ARI dragging into bad territory again. pic.twitter.com/IN6ZCqSe1N

Here we see expectations against results, and voila! The Rangers are in the “good” section of the graph. Now it is early, and there are a few teams there that shouldn’t be there –and you can make an argument that the Blueshirts shouldn’t be there– but regardless, that’s where they are today. And that is a major reason why they are winning.

Tierney puts all this together in a nice little chart called “K ratings” that combines all aspects of what was discussed above into one visual representation. The only problem with K ratings is that it is sourced by Corsica.hockey, which has been shut down (Manny appears to have been hired by a team).

TBL leads, which makes sense.
CAR's extreme everything forced me to move my legend.https://t.co/HCQLAIrlNu pic.twitter.com/2BoBsCftHZ

The above is the most recent representation of K ratings, and it might be the last one we see for a while. Blue is good, and contributing to wins. Red is bad, and why a team might lose. As expected, the Rangers are being driven by quality attempts, both for and against. Their raw quantities might hold them back, but quality is helping them win.

There will forever be a discussion about the Rangers and their lack of shot attempts in the offensive zone. It’s unavoidable, and it is a big flaw of the team. However the design of the defensive system is to limit the quality chances against, which makes Lundqvist’s job easier. Limit those chances, and this group of forwards can and will score.