It’s time to shake up those defense pairings 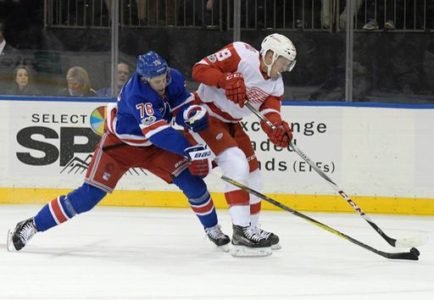 No, this is not an overreaction to last night’s abysmal performance by the blue line. It is not recency bias based on their inability to cover the front of the net in allowing seven goals. The Rangers have a bit of a problem on the blue line, something we all knew was coming. A system change only goes so far.

Currently the Rangers are hemorrhaging shots. Yes defense is a team effort, but changing up pairs of blue liners that simply have not worked well together is a step in the right direction.

Brooksie hits the nail on the head here, and something that has been brought up before. The Neal Pionk/Marc Staal combination, both on the PK and at even strength, has been atrocious. People will look to Pionk’s point totals and say he’s fine, but that doesn’t mean he’s playing well in his own end (as a side note, Pionk’s point totals can absolve him of poor defensive play, but not Shattenkirk’s? Come on now).

Since the personnel likely won’t change any time soon –sorry folks, but you’re going to be seeing Marc Staal, Adam McQuaid, and Brendan Smith a lot– then we need to look at optimizing the players currently on the roster. 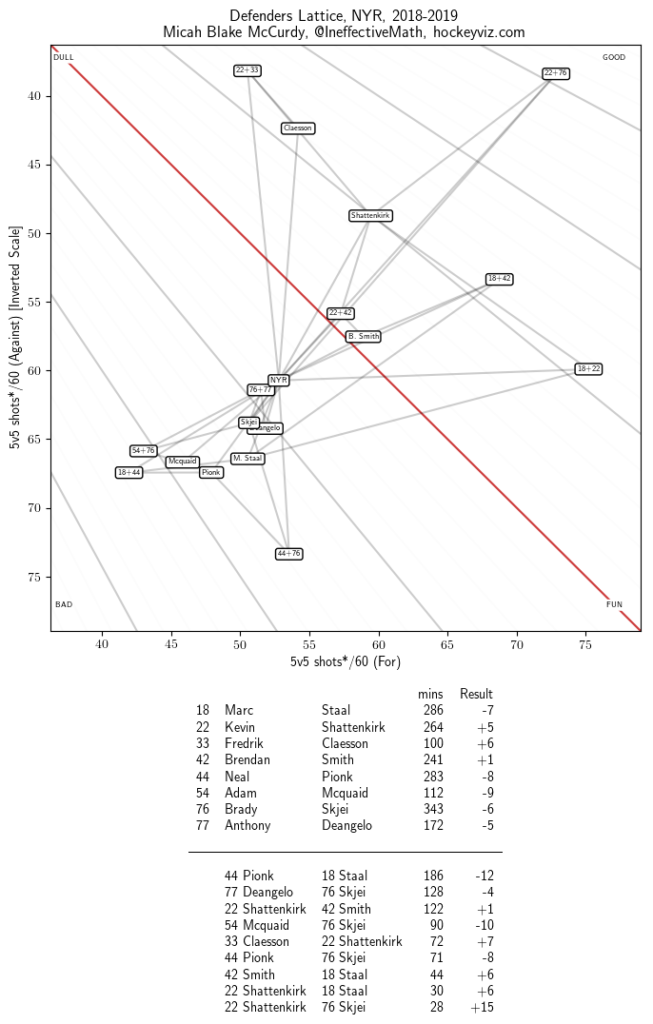 Here is a quick look at how the pairs have fared so far. It isn’t pretty. As a whole, the club is in the “bad” section of this visual, with only Kevin Shattenkirk and Fredrik Claesson having a net positive impact while on the ice (Smith is around neutral). That is…not ideal.

In terms of absolute top pairings, Shattenkirk and Brady Skjei are well above the rest. That makes sense, since they are your two best defensemen. Shocker, I know. Shattenkirk has a positive influence on everyone he’s paired with, but since we can’t clone him, we have to figure out the other pairs without him.

On the flip side of things, Pionk/Staal and Skjei/McQuaid have been absolutely atrocious and should never be paired together ever again. This is not hyperbole. They are by far the two worst pairings the Rangers have used. Skjei/Pionk isn’t all that good either.

Interestingly enough, the pairing of Smith and Staal has been somewhat decent, but they’ve only played 44 minutes together. If Staal needs to remain in the lineup, then that might be your best bet. However, with the need to play all three of Claesson, DeAngelo, and Pionk, it creates a logjam. There is no perfect solution here.

We know what works, and what doesn’t work. So it’s about tinkering with what may work. Perhaps a stable presence like Claesson will work wonders for Pionk or DeAngelo? Does it make sense to have Shatty drag Staal to the positive side of things?

I know how much we all love to have consistent lines, but when things aren’t working, changes are needed. When things change, it takes a while to find something that works. Seeing as this is a transition year for the Rangers, perhaps it is best to put those players who are important for the future in a position to succeed, and then figure out the rest.