One of the more fascinating aspects of this season, at least to me, is how David Quinn’s system is going to take hold with the Rangers and what it will mean for some of their underlying numbers. Looking at raw percentages certainly tells one story, but as time progresses the earlier games may skew the numbers, and may not tell us where the team is headed.

That’s why I’m a big fan of trends, and how a team has been progressing throughout the season. Sean Tierney keeps track of all this through his many easy to follow charts. His work is invaluable.

The first trend I like to look at is rolling shot differential. The better the shot rate trends, the more the Rangers have the puck. The more they have the puck, the less the opposition can score. You know this, though. 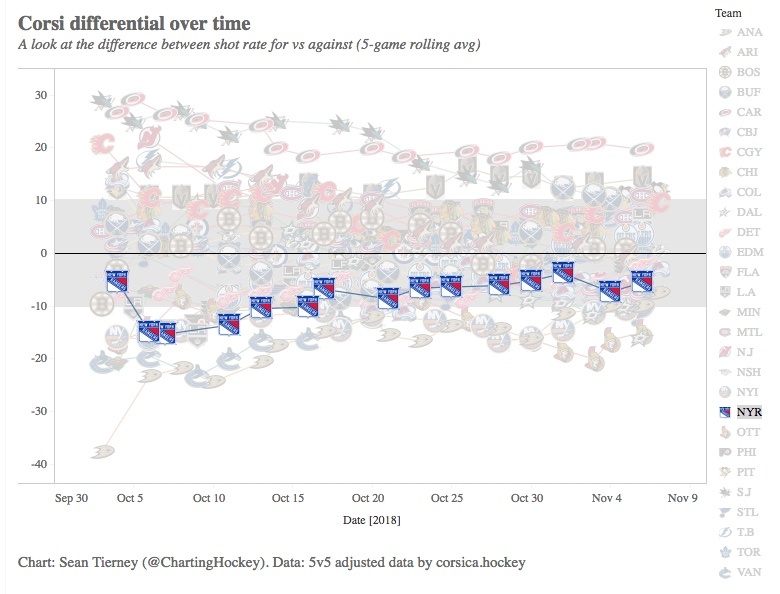 The first thing that jumps at me is how quickly the Rangers dug themselves into a hole early on. However they are trending in the right direction. This isn’t a game-by-game analysis, it’s a rolling five-game average, so you won’t really see big jumps here. What you want to see is a steady trend upwards. Right now the Rangers are hovering in the negatives, and there was a decently sized dip in November. Before that though, they were trending upwards, ever so slowly. By the end of the season, you want to see this in the positives.

This actually mimics what the Rangers’ shots-for chart looks like, interestingly enough. As the Rangers figure out how to generate more sustained offensive pressure, something that will come over time, I’d expect this to improve, especially given how they are trending with shots against.

The Rangers hemorrhaged shots against under Alain Vigneault, and the DQ system was supposed to change that with its simplicity. 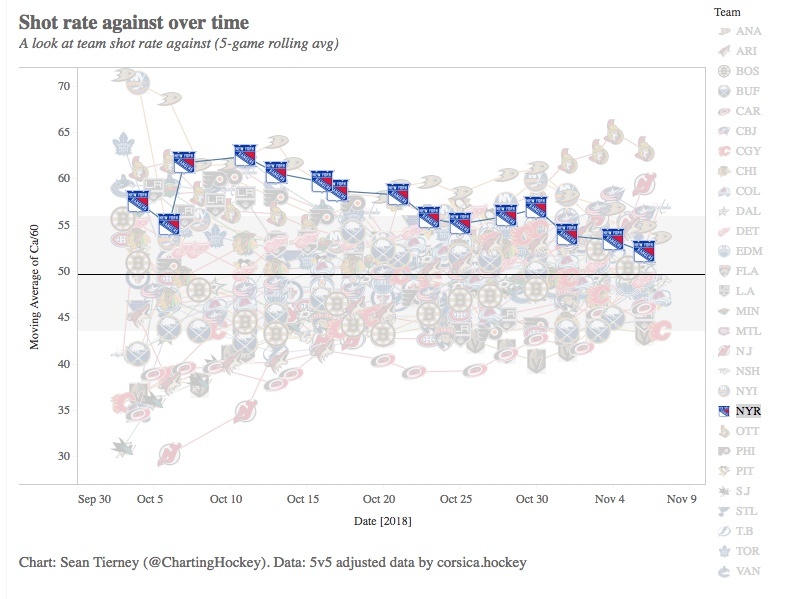 The Rangers were struggling early on, but the system is beginning to take hold. The shot rates against started very high, which again was somewhat expected as the Rangers transitioned and broke old habits. The Blueshirts were peak bad in early October, but have steadily brought down the average shots against. This is very promising, and perhaps a sign that the system played a much larger role than initially thought in the AV Rangers.

There’s a lot more we can get into when it comes to trends, but sticking with the above two for now. The Rangers have seen significantly better defensive play as time has worn on. This bodes well for the future, as stopping the bleeding was the first major hurdle. The next one is shot distance and shot quality. But, baby steps.