Thoughts on Hayes/Winnipeg and William Nylander 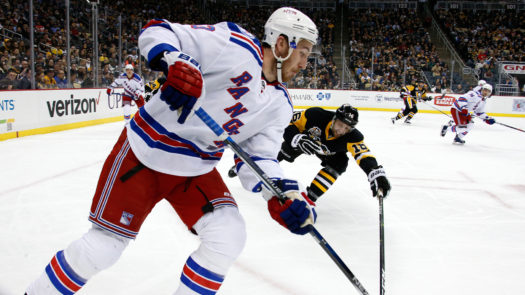 As the season progresses, the Rangers are going to be involved in more and more trade rumors. Kevin Hayes seems to be leading the trade discussions at the moment, most likely because the one-year deal signed this summer signaled he was going to hit free agency, and thus be a valuable trade chip for the Rangers.

In Elliotte Friedman’s 31 Thoughts column, Friedman cited Nick Kypreos in stating that Winnipeg might be a fit for Hayes. Hayes would essentially replace Paul Stastny as the 2C in Winnipeg, an area of weakness for a team with Cup aspirations. With both Patrik Laine and Kyle Connor due for massive offseason raises, Winnipeg may go all-in on this season.

As for assets the Jets can give, they have their first and second rounders this year. They also have a trio of solid-to-very-good prospects in winger Kristian Vesalainen (1st, 2017), defenseman Dylan Samberg (2nd, 2017), winger Mason Appleton (6th, 2015), defenseman Sami Niku (7th, 2015), and center Michael Spacek (4th 2015). Vesalainen is the best of the bunch, but the other three are solid prospects too. The rest of Winnipeg’s prospect pool ranges from meh to ok.

There is clearly a deal to be made here, and one that doesn’t subtract from Winnipeg’s roster. Jeff Gorton has been targeting very specific types of players in his deals, and based on those deals, leads me to believe that he’d target Appleton –assuming Vesalainen is off the table– in a deal for Hayes. I can see a Hayes+ for Appleton/2nd rounder deal.

While the Rangers are going to be sellers, there is one opportunity out there where they might want to be buyers, and that is with William Nylander. Nylander is looking for $8.5 million a year, while the Leafs are looking at around $6 million per year, based on what’s been reported. That’s a significant gap, it’s already November, and the Leafs have until 12/1 to sign him, or else he can’t play this year.

Nylander is a fit for any team. He’s that good. There are two avenues for the Rangers and Nylander, if they choose to get involved:

Offer sheets are incredibly rare, and it’s likely Toronto matches regardless. The compensation range for Nylander in the $6 million to $8 million range is 2019’s 1st, 2nd, and 3rd round picks, with anything over $8.1 million becoming a pair of 1sts, a 2nd, and a 3rd. On the surface, the compensation at $8 million is cheap for Nylander, although it does come with a slight over-payment of Nylander himself.

In a vacuum, it’s something the Rangers should do. However nothing is ever done in a vacuum. The Rangers would be giving Toronto a shot at Jack Hughes, and a more than likely top-three pick. The Rangers have a legitimate shot at getting the #1 overall and landing Hughes, and using that chance to get Nylander is a huge gamble.

In theory, trading for or offer sheeting Nylander is a terrific idea. However the timing just doesn’t jive with the organization’s direction at the moment. That’s going to be the case with a lot of potential moves. Sometimes, timing matters.