What the Rangers’ RFA signings signal about their long-term plan 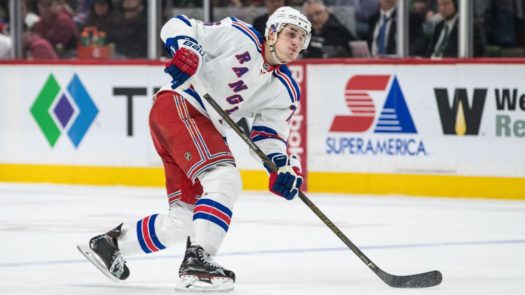 Going into this off-season, the Rangers had 5 key RFA’s that needed new deals: Kevin Hayes, Brady Skjei, Ryan Spooner, Vlad Namestnikov and Jimmy Vesey.  There was an expectation that one or more of these guys would be traded, either at the Draft or after the free agency dust settled.  Turns out, that didn’t happen.  All have since re-signed with the Rangers.  As Dave pointed out yesterday, the Erik Karlsson trade (non-trade?) has held up a lot of market movement, but at this point, I think it’s relatively safe to say these guys will likely be in the starting lineup on October 4th.

While we obviously were not privy to how the contract negotiations played out, or what types of different deals were floated, the actual contracts can shed some light on the organization’s long-term vision and how these guys fit into the team’s plan.

Brady Skjei’s status as a franchise building block is now apparent.  Whether you agree with that assessment or not, it seems the organization views the young defender as a player who will be a steady presence on the blue line as the organization attempts to form a new core to contend with.  The contract itself is very reasonable in that, if he is able to rebound from a rough season last year, his deal will look like a bargain for a pact that encompasses only prime years. Alternatively, if he continues to struggle, there will probably be a team willing to bet on the pedigree if the Rangers ate some salary.  For a deal that ends about a month after his 30th birthday, I think it’s a really solid contract for all involved.

With Kevin Hayes, I do wonder if the Rangers did try to sign him long-term and they found his demands to be too rich in his walk year.  If Hayes was demanding 7 or 8 years at $7 million per year, I don’t blame the organization for changing their expectations with respect to his future. Alas, I suppose we will never know. Either way, the Rangers re-signed Hayes to a one-year pact that will end in UFA status this July. Hayes will be 27 when he hits the market and it’s entirely possible that the organization felt that by the time they were ready to truly contend again, there would be too few prime years left on the deal and he would be in his 30’s with a huge cap hit. Given how the situation turned out, efficient asset management demands that the Rangers put him in the best possible position to succeed to extract maximum value out of him at the trade deadline.

With a big free agency class coming up, it’s unlikely that Hayes will be the best rental player to become available at the deadline, but he could certainly bring back a haul from a team who misses out on Tyler Seguin, Joe Pavelski or Artemi Panarin, assuming they are made available and don’t sign extensions.  The organization has made it fairly clear with this contract that they plan to move on from Hayes after this season.

Ryan Spooner and Vlad Namestnikov signed identical 2-year/$8 million extensions about a month apart. Namestnikov signed his deal right at the start of free agency.  Spooner waited a little longer.  I have to believe trade interest in these two was lukewarm, at best and they have more on-ice value to the team than they carry in a trade.  Both of these extensions take them to UFA status in the summer of 2020.

I think we can safely throw Jimmy Vesey’s contract into this discussion, as well.  He also signed a 2-year deal that will end with Vesey as a UFA. My belief is the Ranges sought modestly priced middle-six depth that would help keep the team respectable on the ice and give them asset options at the next two trade deadlines.

The strategy the Rangers have employed here has both positives and negatives.  The organization got their man in Skjei, so his situation has been taken care of.  For the rest of the signings, the Rangers’ hedging plans are a double-edged sword. On one hand, they maintain financial and roster flexibility through the remainder of the rebuild.  Don’t underestimate how valuable that is.  If an opportunity arises to move one of these guys for a package of young talent, the organization can pounce.  If any of them are comfortable in New York and want to forego free agency and re-sign at a reasonable cost, the organization can assess that on the merits.

One the other side of the coin, the Rangers are going to have a huge free agency class in the 2020 offseason.  Spooner, Namestnikov, Vesey, Jesper Fast and Chris Kreider can all test the market that offseason.  With Mats Zucarello a UFA after this season, we are looking at some serious forward turnover in the next 24 months. Clearly, the Rangers are putting a lot of faith in Filip Chytil, Lias Andersson and Vitali Kravtsov.  Possibly next tier prospects like Brett Howden and Ty Ronning, as well.  They may choose to chase a Seguin or Panarin in free agency, but the 2020-2021 season is going to look a lot different up front.

The blue line is set about a year further out.  Marc Staal, Kevin Shattenkirk and Brendan Smith are all UFA’s the following off-season in 2021.  This isn’t inherently a bad thing, as the closer you get to the end of those contracts, the easier those guys are to trade if any of the five thousand quality defensive prospects the Rangers have amassed in the past few months are ready. Following that offseason, only Skjei is under contract.  Defenseman tend to develop a bit slower than forwards, but three years out, I would imagine at least Libor Hajek, Yeger Rykov, Ryan Lindgren and Nils Lundkvist would be ready.  Since K’Andre Miller is a bit rawer, he might take an extra year, but I wouldn’t at all be surprised if he was ready for full time duty, as well.

In goal, the map seems to be fairly clear.  After this coming season, Igor Shestyorkin will come to North America to get his feet wet in the NHL.  Henrik Lundqvist will have two seasons left on his contract at this point. Shestyorkin should be a proper backup or AHL starter that first year and more or less a straight platoon in the second before taking over the crease full time.  At least, that would be my development plan.

After months of straight talent acquisition (which isn’t done yet!), the organization’s plan is starting to come into focus a bit.  There are still a lot of question marks in the long-term forward group, but the makings of three star players are there in Chytil, Andersson and Kravtsov.  The blue line is loaded and there is a succession plan in goal.  All we can do now is watch and hope the team maximizes their current expendable assets and continues to push the talent envelope as the young players develop. If all goes according to plan, there could be a very bright future on Broadway.