The Winnipeg Jets have a problem. Jacob Trouba wants out. He held out two years ago as Kevin Cheveldayoff played hardball. Both were within their right to do so. It ended with a trade request in the middle of a two-year bridge deal. The trade never happened.

The deal expired, and then Trouba and the Jets did something that isn’t all that common in the NHL. They actually went to arbitration. The NHL’s version of arbitration is silly, with both sides submitting absurd amounts, followed by the team trashing the player to get the cost down. It almost always winds up in the middle ground of a one-year deal. Shocker, that’s what happened. Trouba has a one year deal at $5.5 million. He will again be a RFA at the end of the year.

Trouba is not on the top pair in Winnipeg because of Dustin Byfuglien. So the Jets are paying $5.5 million for a second pairing defenseman, at least based on their current deployment. But don’t let that fool you. Trouba is a top pairing defenseman. 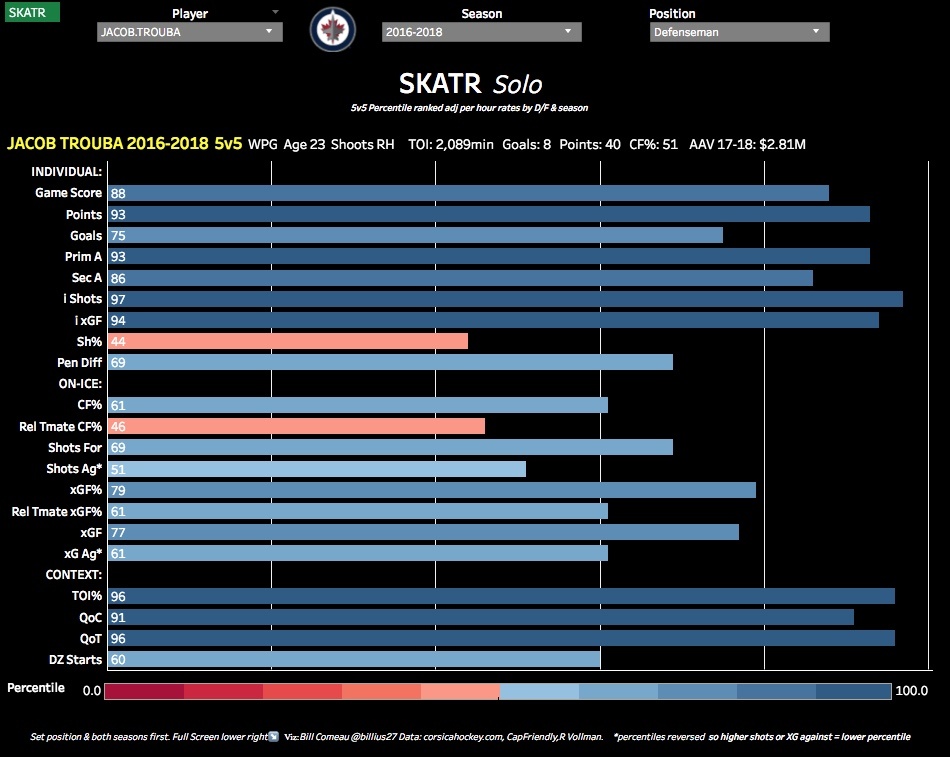 In virtually every stat, Trouba produces like a top pairing defenseman. Yet he will likely never be on the top pair as long as Byfuglien is on the team. In fact, it took his holdout and his trade demand for the team to even move him ahead of Tyler Myers in the lineup, of whom he is significantly better.

The previous asking price for Trouba was a LD of equal quality, so that would be Brady Skjei as the starting point. More would need to be added, since Trouba is an established top pairing, and borderline elite, defenseman. Skjei isn’t that, but it’s a starting point. That was before the arbitration, though.

All this said, it is highly unlikely that Trouba is traded in this situation. The Jets have little leverage in the trade market, as every NHL GM has seen what has happened with Trouba in Winnipeg. The more likely scenario is that Myers is let go after this season, and Trouba assumes an even larger role.

Unless the Jets’ social media account continues to throw shade, though.

They seem slightly less excited to re-sign a top player as they do for several role players. It just makes you wonder.