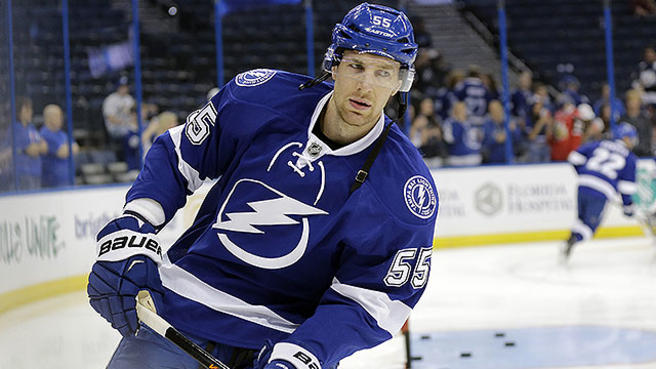 On Thursday, news broke that the Rangers are involved as a potential third team to make an Erik Karlsson to Tampa Bay trade happen. Few details have emerged since, with some rumors of a done deal getting squashed. It’s an interesting situation, as the Rangers are hopefully going to flex their cap space muscles.

Before getting into the players that change hands to make the salaries work, it’s worth noting that the Rangers should be doing everything –within reason– to help Tampa win a Cup. If that happens, the late 2nd rounder the Bolts owe the Rangers turn into a late 1st rounder. If you don’t think a late 1st rounder is worth anything, then you missed everyone that fell to the second round this year.

There are two factors at play here. The first is taking a contract off Tampa’s hands so they fit under the salary cap. The second is ensuring the Blueshirts don’t handcuff themselves with a terrible and long contract. The third is also a locker room thing, as the Rangers shouldn’t really be looking at a locker room cancer either.

With the Blueshirts likely not competing for the next two years, that should be the cap on a contract they can take right now, assuming the player is dead weight. However I’d be willing to look at someone with more term in the contract if the player is useful, just overpaid. Remember, the Rangers have a ton of cap space to work with.

The big thing to keep in mind is the Rangers aren’t targeting any of these guys for their value. They will take on the contract in exchange for additional assets. That bolded part is critical, as it’s the only reason why it makes sense. Flex cap space muscle, get a prospect and/or a pick in return. The Rangers give up nothing but cap space. It’s basically just buying prospects or picks.

The first and most obvious player that jumps out at me is Coburn. The Rangers have a lot of questions on the blue line, and Coburn would at least be a short term stopgap. He has one year left with a $3.7 million cap hit, so it’s one and done. There’s an added bonus that he can be flipped at the deadline for some assets as well.

Coburn is the easiest way to get Tampa under the cap. He doesn’t add much value on the ice, except as a body to take up space in case on of the kids can’t cut it for the Rangers. This is the most logical situation the Rangers may find themselves in, however the return to take his contract is likely minimal.

This idea was floated, and it’s something that was met with extreme vitriol. I love Cally –I still have my Winter Classic jersey– but he’s just not good anymore. As currently constructed, he might not even beat out Matt Beleskey for a roster spot. Cally has two years remaining on his ill advised $5.8 million per year deal. Boy that one soured fast.

Cally would free up a ton of cap space for Tampa, both this year and next. The Rangers are not expected to compete within that time frame, however they need to be cognizant of the 2019 free agent class that includes Tyler Seguin and Artemi Panarin. If there are plans to sign on, bringing on Cally might hamstring them.

The return to take Cally’s contract would need to be significant for the Rangers to consider this. There may be a chance to flip him for 50% retained at some point, but let’s assume that is unlikely.

The extreme option from Tampa, Johnson was oft-injured (but he did okay 81 games last year) and carries a $5 million cap hit for the next six years. He put up 50 points in those 81 games last year, so he’s still a serviceable second line center. However the question of his durability remains. That is a long commitment for such a big question mark.

Taking Johnson’s contract would hamstring the Rangers, especially if doesn’t play. It’s also expected that the 27-year-old will see his production decline, making that even more of an albatross. On the bright side the Bolts would need to attach something significant to make it work, something like Cal Foote.

This is extremely unlikely.

The Blueshirts could also take on Bobby Ryan’s deal, as that seems to be the major piece of the trade to Ottawa. So much so that the Sens are willing to risk getting fair value for Karlsson in order to shed the four years remaining on Ryan’s $7.25 million per year deal. That’s a lot of money and a big commitment.

There is room to be creative with Ryan, since the Senators aren’t in a cap crunch, and just want to shed the contract. It seems unlikely that any team would consider him at his full contract value. But at 50% retained (roughly $3.6 million) he can be useful.

Ryan’s rate stats are still pretty solid, which makes you believe that he just needs a change of scenery. That may not be the case, and it may be the 31 year old slowing down, but the numbers suggest he has something left in the tank. At $3.6 million, he’s not a cap killer.

I can find a way to reason to make this work, especially if there is something significant attached to it. That said, I like this more than Tyler Johnson, but it’s not overly appetizing to me.

The forgotten MacArthur carries another two years and $4.65 million left on his deal. MacArthur has played 8 total games the past three years. He’s basically just someone acquired to stash on LTIR.

Ottawa might look to move this deal to save real-world dollars, but likely need the contract to hit the cap floor. It’s insured, so my guess is there is no out of pocket money that Melnyk is losing here.

This is unlikely as well, but something I wanted to throw out there.