Checking in on the defense 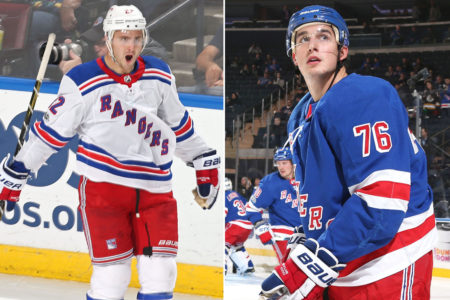 Happy Friday, BSB people. While the Draft and the madness of free agency have come and gone, for the most part, the Rangers appear to have more or less the same team that ended last season.  There are still certainly trades to be made and changes are still very possible, but the Rangers look to be heading into next season with an objective of getting younger players more ice time and committing to player development as a path forward.  This will be new coach David Quinn’s biggest challenge.

This is especially true on defense.  The Rangers sported a sub-par unit last season, marred by injuries, poor performance and a general lack of impact talent.  The organization amassed a small army of new draftees and prospects over the past few months and the future of the blue line looks promising with the likes of K’Andre Miller, Nils Lundqkist, Libor Hajek, Ryan Lindgren, Sean Day and Yegor Rykov looking to emerge in the next couple years.  However, the Rangers still have to ice a team in 2018/2019, so let’s take a look at the present state of the defense.

The Rangers currently have ten defensemen under contract with NHL experience and a few more options in the minors.  Those ten include Kevin Shattenkirk, Marc Staal, Brendan Smith, Brady Skjei, Neal Pionk, Anthony DeAngelo, Fredrik Claesson, Steven Kampfer, Rob O’Gara and John Gilmour.  Hajek, Lindgren and Day are going to be the higher upside kids pushing for a job in camp and throughout the season.

Let’s assume for a second that the organization wants to give the aforementioned prospects some bigger minutes in the minors to help their development and we are really going to be looking at the first ten as true NHL options.  Obviously, one of the kids could force his way into the conversation, but that’s not where we are going this morning.

I think it is fairly clear that our first pair is going to be Kevin Shattenkirk/Brady Skjei.  They are the two most talented defensemen on the roster and they slot easily into a LD/RD lineup.  Whether the organization is showcasing these two for a trade or if they plan to make them building blocks to help bring the kids along, it’s important for this pairing to eat the majority of big minutes for this team.

The second pairing gets a bit trickier.  Part of me wants to reward Neal Pionk for his consistency and poise last season. However, with the re-build in full swing, I’m going to go a different direction.  I think without the pressure of contention or even the expectation of icing a competitive team, the organization really needs to see what they have in Anthony DeAngelo.  I personally find his behavior distasteful, but it’s nothing that the organization wasn’t comfortable with when they acquired him.  He has elite offensive upside and they need to see what type of asset they have in a results-neutral environment.  For me, that is throwing him on the second pair, giving him 15+ minutes a night to control the breakout, quarterback the powerplay, to make mistakes and sink or swim.

DeAngelo will need to be paired with a defensively responsible partner who can help to positionally cover his riskier maneuvers.  I would be tempted to pair him with someone like Pionk, both in style and a desire to get Pionk more minutes, but I think that is a lot of responsibility for a young pro, plus there is the whole RD/RD thing happening with those two. For those reasons, I would pair him with Marc Staal and see how David Quinn’s new system helps Staal’s game. We know he can handle big minutes, so let’s hope he can be a guiding hand for DeAngelo and help prolong his own efficacy under the new coach.

Now, don’t get me wrong, I do like Neal Pionk quite a bit.  However, I think we all know that on a true contending team he is a bottom pairing/7D type player.  For that reason, he is going to occupy my hypothetical third pair with Brendan Smith, at least to start the year.  The organization has to hope that after spending most of the season in Hartford that Smith has re-committed to his conditioning and preparation to continue his NHL career.  Giving him some sheltered minutes and PK time early on can help him get back on track. Hell, you never know what team might be desperate for defensive depth at the deadline and may be willing to help get that contract off the books.  I think showing that Smith isn’t a total value black hole is important.

For me, Fredrik Claesson is your ideal seventh d-man to start the season.  You could plug him in anywhere in the lineup if someone falters and he is quality NHL depth.  You could certainly make the argument that he should get a full-time lineup spot over, say Brendan Smith, and no one could really argue.  It’s a nice player to have on a young team with lineup uncertainty.

On the other hand, Rob O’Gara and Steven Kampfer (especially O’Gara) aren’t true NHL options, in my opinion. Kampfer would make a fine 7th defenseman, I suppose, but between contract obligations and other developmental factors, he is an odd-man out.  Kampfer would have to pass through waivers to be sent down, but I wouldn’t sweat that too much.

Which leaves us with John Gilmour.  I feel bad for Gilmour, because he showed enough in his audition last season to be a real option for the big club this season.  If Smith or DeAngelo really falter, he could see his name in the lineup in a hurry.  I think he is a nice depth to have at the AHL level, as he can step into the NHL lineup at any time, plus he can be a “veteran” to help the kids down in Hartford continue their development.  Life isn’t fair sometimes for the waivers exempt.

Now, additional deals or big steps forward by prospects can throw a wrench into this hypothetical in a hurry. However, my Opening Night defensive lineup would look like this:

What do you all think? Sound off with your “state of the defense” thoughts in the comments below.