A Quick Word on Coaches 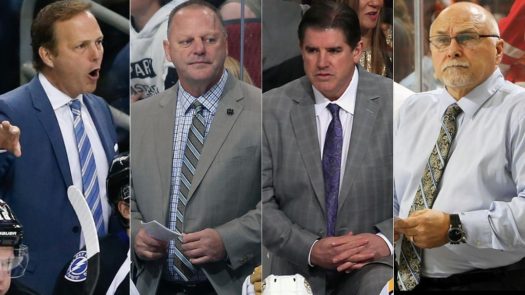 Three of the four coaches still in the playoffs, and Peter Laviolette.

It has been an interesting spring for Rangers fans who have in recent years become accustomed to the hockey season lasting until around Memorial Day Weekend (and sometimes beyond).  Instead, the Blueshirts are at work off the ice, planning a rebuild that will hopefully serve as the foundation for another decade-plus of sustained playoff success and contention (and hopefully, the ultimate prize).

Yet it feels as though that process can’t really begin until one massive blank is filled in: the Head Coach.  But what if I told you that it doesn’t really matter who’s behind the bench on opening night come October?  Allow me to explain.

Let’s start by looking at the teams remaining in the NHL playoffs, and specifically who their head coaches are: Tampa Bay (Jon Cooper), Washington (Barry Trotz), Winnipeg (Paul Maurice) and Vegas (Gerard Gallant).  All four have very typical NHL head coach pedigrees, and Jon Cooper is the only one among them who hasn’t worked for another NHL team.  None of these coaches have won a Stanley Cup previously.  Do any of them give their team a significant edge in a single game or playoff series?  I would argue no.

Then there’s the fact that coaches – all coaches – have flaws and blind spots.  Jon Cooper is doing exactly what sent many Ranger fans into fits of rage on a near-nightly basis: he’s playing Dan Girardi on the top pair, alongside Victor Hedman.  Yes, Dan Girardi is still bad (though he’s played somewhat better in Tampa’s system than he did the last three seasons with the Rangers).  Over in Las Vegas, Gerrard Gallant is heaping nearly 23 minutes per night on Deryk Engelland.  Barry Trotz’s opinion of an optimal lineup includes Tom Wilson playing with Alexander Ovechkin (it’s worked well enough, right?).  Paul Maurice…well, Paul Maurice has a supremely talented team.  The Jets’ roster is littered with so much talent that it’s almost fool-proof.

Despite the questionable decisions described above, each of the four remaining teams have a great chance of winning a Stanley Cup.  The reason that’s the case is because hockey is ultimately a game decided by some combination of skill, luck and goaltending.  If those three things come together at the right time and in the right place, pretty much anyone can coach a team to a Stanley Cup.  Don’t believe me?  I’ve got two words for you: Dan Bylsma.

Of course I’m exaggerating slightly.  Coaches need to get their players to buy in to a team concept, to trust one another and to play in a cohesive system.  They must adjust their game plan when the opponent figures it out.  And in the case of the Rangers, their next coach must understand how to identify, nurture and develop talent.

My point in all this is that, while I understand the frustration with Alain Vigneault that boiled over in recent years (it was absolutely warranted), I think that Ranger fans often too singularly focused on the coach as the reason for the team’s woes.  So let this be a caution to all that AV’s replacement likely isn’t going to have all of the answers.  He almost certainly isn’t going to be perfect.  Luckily, it may not matter very much.