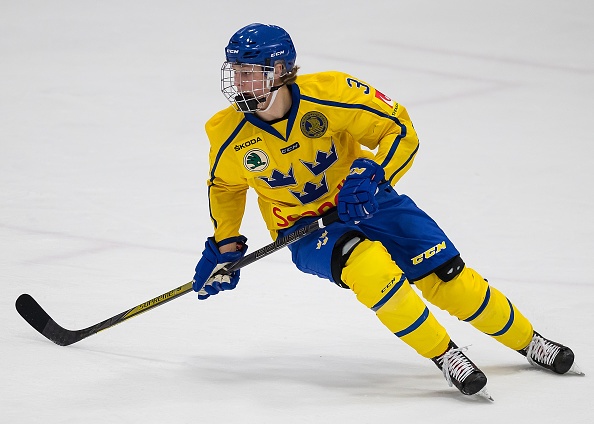 Continuing our review of some of the kids that may be available to the Rangers to pick at #9 overall, we look at defenseman Adam Boqvist, a Swedish defenseman. This year is a fantastic draft for defensemen, with five of the top-ten picks projected to be blue liners. Boqvist is one of those kids that falls in the 7-10 range in the first round.

Boqvist currently plays in Sweden’s J20 league, so he’s not playing in the SHL with Rasmus Dahlin (something else that sets Dahlin apart from everyone else). Even if he’s not Dahlin, he’s still your prototypical Swedish defenseman, and when in doubt, always draft a Swede.

Boqvist’s greatest strength is his skating and agility. It’s simply amazing how you can’t find a Swede who doesn’t skate well. His speed is solid, his acceleration is top notch, he can shift and transition on his skates well, can move laterally. He’s just very fluid on the ice, very fun to watch. His acceleration and top speed make him a danger on the rush, but also help him get back on the back check.

As you can imagine, Boqvist’s best strengths are in the offensive zone. That doesn’t mean he stinks in the defensive zone, but he’s at his finest when he’s controlling the play and the puck. Again like most Swedes, everything slows down for him, and he makes the simple play. On a team that makes the fancy pass too much, a defenseman that can make the easy, simple play to create space.

It’s plays like this that make him an asset in the offensive zone. He knows when to pinch, how to keep a cycle going, and can read plays well to put himself and others in positions to score. His vision is great, again like most Swedes. He has a solid shot too, so teams can’t back off him on the point. He, like Hughes, can be a potential top pairing defenseman on his offensive abilities alone.

In the defensive end, he uses his positioning and stick work to break up rushes and set up the transition game. It’s rare that you see his skates stop, which is when defensemen get burned. He’s the kind of guy that doesn’t get beat around the boards, will keep you to the outside and slow you down. As with every defensive prospect, his game will need constant evolution to make and stick in the NHL.

One of his current weaknesses is the physical game, but that makes sense since he is only 170 lbs and 18 years old. Strength can be worked on. The big thing to note is that while he may not win every physical battle, he is fearless and willing to engage. When the physical strength comes, I wouldn’t expect this to be a weakness for long.

I like Boqvist, and he might be the second most offensively talented defenseman in the draft. There are legitimate concerns about his ability to adjust defensively, but he is very clearly the highest ceiling defenseman in the non-Dahlin class. For a team that lacks elite talent, if he’s the best player available at 9, he’s a great add.