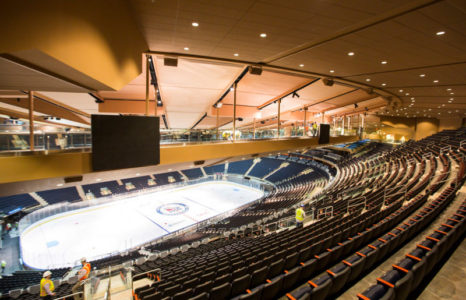 MSG in May (Deadspin)

Happy Friday, BSB people.  With last night’s loss to the Islanders, the clock continues to tick down on a lost season.  With one game to play, the Rangers currently sit in 23rd place in the league, just one point ahead of the Blackhawks and Oilers.  If those teams win their remaining game(s), there is a long shot possibility that the Rangers could drop as low as 25th.  With some moving parts still ahead for the Blueshirts, I have some thoughts…

1. If the Rangers do happen to fall into 25th place, they will have a 6.5% chance at the number 1 overall pick.  Slim chance there, even though the 31st ranked team only has an 18.5% chance.  The general consensus is that the talent drops off significantly after the top 9-10 picks, so the Rangers could use a stroke of good fortune when their lottery ball pops.

2. On Twitter yesterday, I wondered aloud how awesome it would be if the Flyers had lost to Carolina last night and then missed the playoffs by one point as a result of losing to the Rangers in a shootout tomorrow.  Tanking plan be damned, that would have rocked.  Alas, it was not meant to be as the Flyers now only need one point to clinch a playoff spot.  Sure, the Panthers could win out and the Rangers could defeat Philly in regulation and still have the Flyers miss the playoffs, but it’s somehow less fun now.  That would have been poetry.

Am I the only one who thinks it would be the greatest thing ever if the Flyers lost to Carolina and then missed the playoffs by one point in a shootout against NYR?

3. Larry Brooks wrote an article the other day wondering what would happen if John Tavares left the Islanders and signed with the Rangers as a UFA in July.  First, it would be the world’s most giantest middle finger to the Islanders, which would be just so great.  However, why would you head over to a rebuilding team after years of frustrating rebuilding?  I don’t see it happening, like, at all.  However, I got to thinking about how I would feel if it did.  Obviously, Tavares is a special talent, but his acquisition would have ripple effects through the rebuild as the organization attempted to make the team as competitive as possible, immediately.  I don’t know where I am going with this, but I think a meaningful pursuit of Tavares would run contrary to the current mission statement.

4. So, I am very curious about this.  After seeing the writing on the wall last year and the bottom falling out this year, there aren’t a lot of AV defenders around these parts anymore.  Most of the fan base is anticipating (expecting?) and requiring his dismissal when the season is over.  So, I ask you this.  What if he isn’t let go?  What if the organization feels that he is the best voice to lead the team forward?  How will this affect your fandom, general interest in the team or desire to see through the re-build? It’s fair to say that this is a watershed moment for the franchise in the Henrik Lundqvist era, and after years of heartbreak and almost moments, do you have the inclination to continue to live and die by this team under AV’s continued leadership?

5. It was announced that Joel Quenneville and Stan Bowman would be retained as coach and GM of the Blackhawks yesterday.  This is noteworthy for the Rangers because it was presumed that the Q-Stache would be a target for a potential coaching vacancy.  He is obviously very accomplished and respected around the league, but I was a little bit weary of bringing in a “hockey man” as the new voice for a young team.  I think I would prefer a younger coach with a progressive mindset who will look toward future trends in usage and skill set evaluation to maximize deployment and other cutting-edge strategy.  If AV is let go, the determination about the future of the coaching staff will be fascinating (or horrifying?) to watch as the offseason goes on.

7. There has been a lot of debate about the labeling of first line players.  There is a significant difference between a first line player and an elite player.  By definition, elite players are in very short supply.  I liken it to baseball, every team has an Ace pitcher, but not every number one pitcher is an Ace.  Every hockey team has a first line, but not all first liners are elite.  It just is what it is.  That said, it takes elite talent to win a Stanley Cup.  I just hope Gorton can find some, because outside of Henrik Lundqvist, no one on this team is elite.

8. I’m also curious to hear who everyone would like to retain for next year’s defense corps.  Let’s have your 7 defensemen for next season.

9. Don’t bother re-signing Pavelec, just let Georgiev be the backup.  An AHL depth guy wouldn’t be a bad idea, though.

Ok, that’s it for my last “thoughts” post of the 2017-2018 season.  I wish I could say it’s been fun.  We have a super interesting offseason ahead, so keep it locked right here for all your Rangers related coverage.  Enjoy the finale and (Ranger-less) playoffs!