Last night, Rangers fans were treated to the final “It’s a power play goal!” call by Sam Rosen of the season, as the MSG broadcast signed off for 2017-18.  Game 82 on Saturday in Philadelphia will be broadcast by NBC.  Even though this season’s fate was sealed long ago, and no one will miss this particular version of the Rangers, the end of a hockey season is always a tad upsetting.

The Rangers couldn’t muster much against the Islanders and were swept by their intra-city rivals this season (0-3-1, -10 GD).  The Rangers have now failed to win at Barclays Center since the Islanders moved there three seasons ago (0-5-1).

Kevin Hayes scored in the first period on the power play, but that was pretty much it.  Filip Chytil had some noticeable moments, in particular when he set up Paul Carey for a golden opportunity in the second period, but Carey’s shot was stopped by Jaroslav Halak.

The result helps the Rangers draft lottery chances, albeit slightly.  The Blueshirts entered play in 22nd place overall and the loss dropped them to 23rd, but plenty can change over the course of the next few days.  We’ll see where things net out after all 82 are completed.

On to the goals…

Kevin Hayes netted his 25th goal of the season on the power play, slamming home the puck after Brady Skjei’s shot caromed off the end boards.  Hayes has been very impressive over the last third of the season, tallying 14 goals in his last 27 games.

This goal was originally credited to Anders Lee and it would have been his 40th of the season.  Alas, the puck glanced off of John Gilmour so Thomas Hickey was awarded the goal.

Credit where it’s due: Andrew Ladd and Anthony Beauvillier executed a pretty give-and-go to put the Isles ahead 2-1.  But just before this happened, the Rangers’ fourth line (Carey, Andersson, Holland) mishandled the puck while exiting the zone, creating the opportunity for the Brooklynites. 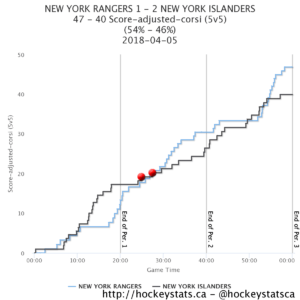 This was a pretty even game throughout, with neither team really dominating for a significant stretch of time. 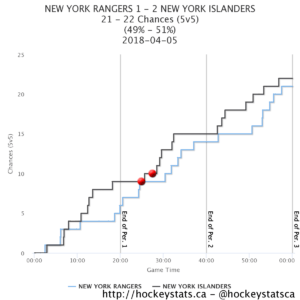 Both Halak and Ondrej Pavelec were solid in net when called upon, though many of these scoring chances were not of the “Grade A” variety.  This game had the feel of a pre-season affair, not an early spring rivalry game.

This will be the longest off-season for the Rangers since 2010, and arguably their most important in nearly two decades.  But first, the Rangers will wrap up their campaign on Saturday in Philadelphia.  Then the long summer begins.