Don’t compare the Rangers re-build to the Yankees 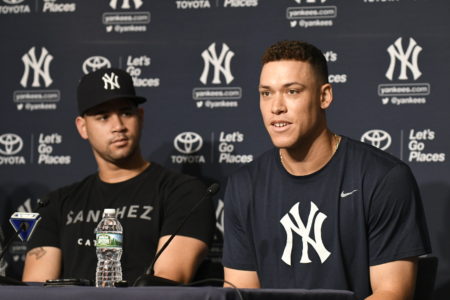 Yesterday afternoon, the Yankees won on Opening Day for the first time in the last seven years.  In honor of this momentous occasion, I am here to deliver a PSA: do not compare the Rangers’ re-build to what the Yankees did.  Ever since the Rangers announced their intentions to recognize and re-build a flawed roster, some fans have been comparing the Rangers’ sell-off to what the Yankees were able to accomplish in 2016.  This is really not a fair comparison.  For those non-baseball fans amongst us, the Yankees, after several years of mediocrity (sound familiar?) made the difficult decision to buck New York sports tradition and have a deadline sell-off when it was clear they were not going to be able to contend.  They held three of the best relief pitchers in the game as trade chips for the stretch run.

They found a market perfect storm in two franchises with massive World Series droughts (the Cubs and Indians), who were both in great positions to contend.  The returns on their trades far exceeded normal market value because of this and were able to go from a bottom 10 farm system to a top three system seemingly overnight.  Combine that with a young major league core and the Yankees are back to Evil Empire status just over a season later.  This is obviously what Rangers fans are hoping for when it comes to the turnaround on this re-build.

Here in the problem, though.  These trades coincided with the MLB ready-ness of Aaron Judge, Gary Sanchez, Luis Severino, Greg Bird, Jordan Montgomery and Chad Green.  For those of you unfamiliar with these players, Judge hit 52 home runs in 2017, unanimously won Rookie of the Year, was MVP Runner up and is now the cover athlete for the MLB video game.  Sanchez is now a top-5 MLB catcher, having hit 53 home runs in his first 674 at-bats.  Luis Severino finished third in the Cy Young voting in 2017 and is considered a budding ace.   Greg Bird, while injury prone, is an incredibly productive first baseman when healthy.  Jordan Montgomery finished with the top rookie WAR for pitchers in 155 innings in 2017.  Chad Green was a revelation in the bullpen and regularly worked as a multi-inning fireman for a team that came one game from the World Series.

So, what is my point? My point is, that after selling off at the deadline, all the Yankees have to show for it is about 60 relief innings (from Adam Warren and Ben Heller) and 142 plate appearances (from Clint Frazier) from their deadline haul, so far.  The rest of the insane production the Yankees have used to turn the franchise around has come from players who were already in the organization.  Because of this production, they were able to dip into their prospect depth to make a couple trades (David Robertson, Sonny Gray, Giancarlo Stanton) that turned them into the powerhouse that most baseball pundits see in 2018.

The development of those players was 99th percentile stuff.  The sell-off coincided with three superstar players developing pretty much at the exact same time.  Combined with high-level, cost controlled depth, the Yankees were able to acquire additional futures that should help either this season or next (Gleyber Torres, Justice Sheffield) and are poised for a huge deadline, flush with cash and a cache of prospects.  This is not the Rangers.

The Rangers did not have a coalescence of perfect market conditions during their tear down this season.  They got more or less representative value for their trade chips, and while they have some nice young pieces in their pipeline (Shestyorkin, Chytil, Andersson, Day, etc), these guys are not turning into overnight superstars next season.  Several of the key pieces of the recent trades a couple years off (Rykov, Lindgren, Hajek, Howden) and a significant amount of value is tied up in draft picks.  Now, draft picks tend to arrive in the Show faster in hockey than baseball, but this isn’t a magic fix, especially drafting (probably) outside the top five.

The Yankees also had a very competent coaching staff.  The problem was the overpaid veterans no longer producing.  There was no issue with the on-field strategy.  Obviously, if the Rangers move on from their current coaching staff, that is a step in the right direction, but this is also going to require a wholesale system change.  Plus, you have significant roster turnover that still needs to happen in order to maximize the team’s current and future talent level.

I guess, my point is that it is too easy to associate and compare the similar strategies of two franchises in this market, because coinciding tear-downs are so rare in New York (unless you are the Knicks. Sorry).  The problem is, these franchises found themselves in vastly different places at the time they decided to hit the re-set button.  The Yankees did very well in their replenishment of farm system depth and were supplemented by three homegrown superstars during the process.  For the Rangers, on the other hand, there are no shortcuts or quick fixes.  This is a fundamental re-build that is going to take time and careful execution.  As the season winds down, we can only hope the front office pushes the right buttons and allows the team the opportunity to make good on its promise to fans.  Just don’t expect the 2017 Yankees.