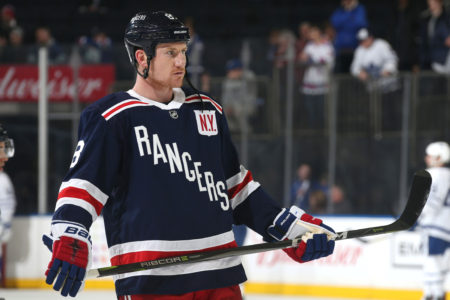 The Rangers continued playing out the string last night, losing to the Philadelphia Flyers 4-3. The game was an entertaining affair, and featured strong performances from Jesper Fast, Alexandar Georgiev and Chris Kreider. The Blueshirts put forth a solid effort, but lost due to the lack of talent and depth that playoff teams like the Flyers boast. It was a game very much in line with what we’ve seen from the Rangers over the last few weeks, and likely what we’ll continue to see as the season winds down.

But if you came here expecting a full game recap, I’m sorry to disappoint. Instead, I’d like to talk about Cody McLeod and Vladislav Namestnikov.

What continues to baffle, even through this string of meaningless games, are Alain Vigneault’s in-game lineup decisions. Of course, it doesn’t really matter. Losses are preferable to wins given the Rangers’ focus on the Draft in June. But these games can still be useful for evaluating the young talent that the Rangers brought up and the NHL players that they got back in trades for some of their most valuable assets.  One of those players, Namestnikov, was the target of Vigneault’s ire last night as he was demoted to the fourth line in favor of – you guessed it! – Cody McLeod.

Was Namestnikov playing well? Not necessarily. Though neither was Jimmy Vesey, who hasn’t done a whole lot in his NHL career (31 goals, 18 career assists [HOW?] in 151 career games) but usually avoids in-game demotions due to his perceived willingness to “work hard” and Harvard pedigree.  But I digress.

Regardless, Alain Vigneault – who is certainly coaching as though his future depends on it, given his emotional protest to a close (but correct) offside call in the third period – decided that Cody McLeod deserved Namestnikov’s third-line spot with Ryan Spooner and Pavel Buchnevich. Namestnikov played just two shifts in the third period before getting blasted in the back by a teammate’s shot and sitting out the last 15 minutes of the game.

Decisions like this defeat the purpose of otherwise meaningless, late season games. The Rangers gave up an awful lot in the Tampa Bay trade, with Namestnikov a key piece (if you break the trade down into two pieces, it was Ryan McDonagh for futures plus JT Miller for Namestnikov straight up).  The Rangers know what Cody McLeod is.  They know he is not a part of their future.  But Namestnikov could be.  He was a point-per-game player in the AHL, and when he joined the Rangers last month he had posted a career high of 20-24-44 in 62 games with Tampa. Yes, he was playing with Steven Stamkos and Nikita Kucherov, but Namestnikov is no slouch.  The Rangers should be giving him top six minutes and power play time to properly evaluate whether he’s worthy of a new contract this summer.  While it’s not self-evident, playing Cody McLeod over Namestnikov operates as a counterbalance to everything the Rangers are supposed to be doing right now: mainly, rebuilding their team with a focus on unearthing and fully developing young, high-caliber talent.

The yo-yo’ing of young players is nothing new when it comes to Alain Vigneault (or most Hockey Men, to be fair). However, with a couple of very important, highly visible call-ups coming, it bears watching.  Will Filip Chytil or Lias Andersson give way to McLeod or David Desharnais if they’re having a rough time?

Is that the best way to develop young talent? In this writer’s humble opinion, the answer to that question is a resounding no.