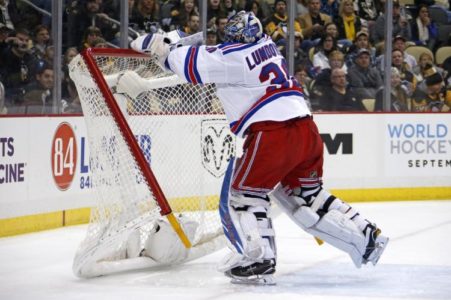 Even With last night’s win against the Sharks, the Rangers head into the All-Star break in a complete free fall.  We have all known for months that the process has sucked, and Henrik Lundqvist had been keeping the team afloat.  Well, now that Chris Kreider is hurt and a consistent rotation of random injuries keep hitting the roster, the team has had to bring up a carousel of AHL talent.  The goals are starting to dry up and Alain Vigneault’s “quality over quantity” system has stalled.

For the past several years, the deployment and systems philosophy had run contrary to our conventional understanding of hockey analytics, and the Rangers’ relative success had many analysts questioning whether the team existed between the lines of the current stats.  While it still might be a true statement, this years’ incarnation (which had apparent depth issues from the outset) has put any evanescent hopes of contention firmly out of reality.

So, what now? Well, technically, the Rangers are only one point out of a playoff spot and two out of the second seed in the division; but come on, let’s be real here.  The Rangers are dead last in the league in every meaningful possession statistic besides GF and GA, but we know that is a combination of Hank and the quality of the (top heavy) forward core.  The bottom is falling out.

In the spirit of “hate week” as Dave has coined it, it’s time to burn it down.  If the organization wants to get Lundqvist that elusive Cup, it needs to take decisive action to give the organization a complete overhaul and recognize this for the lost season it is.  I don’t think there is any way around it.  This team is going nowhere, and the organization can choose to accept ongoing mediocrity in the name of a few home games of playoff revenue or they can seize the opportunity to take advantage of a parity-rich environment and maximize some returns that could turn this franchise around.

What does that look like?  Let’s take a look at my rebuild*…

*Bear in mind that this is never going to happen, but rather than slowly drink myself to death, I’m going to give it a go.  Also, I’m not going to try to forecast actual returns for players, as that would in no way be accurate, so I’m going to go through the philosophical approach to the purge.

Lay waste to it.  Benoit Allaire is the only one who should make it out alive.  Alain Vigneault’s message and philosophy has run its course and should be cast out with the rest of this season.  Lindy Ruff is no different in systems or approach to the modern game, so he is out, too.  Scott Arniel has done nothing of note and has been a loyal lieutenant to AV since the beginning.  Honestly, I forgot Daryl Williams was even on the staff.  He’s a goner.

So, who replaces these guys?  I would look for a young-ish guy who is analytics savvy and a good communicator.  Someone who is willing to take research from the (gulp) front office and apply it on the ice.  The on-ice philosophy has to get much more progressive and realistic about asset allocation and deployment.

For any of this to matter, there needs to be a serious shake up at the top.  I know, I know, Dolan is never going to do that.  That’s true, but this is my therapeutic exercise and that’s what’s going to happen.  Sather is out.  Gorton tried, but he has never really seemed to grab hold of meaningful autonomy and he routinely has his ass handed to him at the negotiating table (at least in trades).  No remnants of the old regime can remain.

As for the rest of the front office, how about we get guys like Chris Drury, Brad Richards and Brian Leetch out of hockey operations? Go down to Harvard (or Yale, Princeton, etc. if you want to avoid the whole Boston thing) and find your best combination of economists and ex-college players with MBA’s and JD’s and have them advise your new GM.  This league’s slavish devotion to giving guys with physical skills over intellectual ones the keys to multi-million-dollar franchises is astonishing to me.

Oh, yeah.  Gordie Clark can stay because he is good at his job.

Rick Nash, Michael Grabner, Nick Holden, David Desharnais, Ondrej Pavelec and Paul Carey are all pending UFA’s at the end of the season.  They combine for $12.85 million in cap space.  Trade them all.  Nash and Grabner, in particular should fetch meaningful returns.  The organization should prioritize near NHL ready talent to help accelerate the rebuild.  Best returns possible, and they absolutely should be willing to trade within the division.

Also, I would look to re-sign Nash to a reasonable deal after the season.  Just because he should be traded now doesn’t mean he can’t be a part of the future.

The Rangers have a high-profile crop of upcoming RFA’s who are undoubtedly going to be looking for raises (all have arbitration rights).   Those players include Brady Skjei, Kevin Hayes, JT Miller and Jimmy Vesey.

To me, Skjei is the type of player you build around.  I am on the fence with Hayes and Miller.  I think both of those guys have utility going forward, but the price has to be right.  Vesey, I’m not a huge fan of.  His RFA salary will definitely eclipse his value.

My approach would be this.  Gauge each RFA’s baseline contractual demands and act accordingly.  Each one of those players should fetch a decent haul.  The cap is rising next year (hopefully) so there could be some wiggle room if you project them to be better in a new system, but they are certainly not untouchable.

Mika Zibanejad- Young and should be part of the next core, signed long-term.  Keep him.

Chris Kreider- The blood clot injury is scary, but his contract is affordable and he brings a nice power forward profile to the top six.  Keep him.

Mats Zuccarello- Zucc is a tricky one.  He only has 1.5 years left on his contract, he is now on the wrong side of 30 yet should net a pretty significant return.  I’d gauge the cost of an extension and act accordingly.

Jesper Fast- For his cap hit and versatility, I think his on-ice value eclipses his trade value.  Keep him.

Pavel Buchnevich- What, are you nuts?  Keep him.

Kevin Shattenkirk- Good value on the remainder of his deal, provided he isn’t hiding any more injuries.  Definitely a keeper.

Brendan Smith- Highly doubt anyone would touch this contract.  Welcome to the Smith/Staal third pairing.

Ryan McDonagh- Given the demand for top end defensemen, it’s time to extract value from McDonagh.  Given the circumstances, the trade demand and return package could be the Aroldis Chapman return for the Rangers.  Since his next contract will be most certainly be ill-advised, he is the premier piece to kick start this rebuild.

Henrik Lundqvist- With three more seasons left at $8.5 million, no team will provide a proper return for the King’s services.  He shall man the crease until the Czar is ready.

So, what are we left with?

We have the following forwards retained:  Zibanejad, Kreider, Fast and Buchnevich.  Possibly supplemented by Zuccarello, Hayes, Miller and Vesey.  Next year should see the emergence of Andersson and Chytil, so the foundation for the future is fairly solid up front.  Need some additional skill and depth in trades.

Defense: Shattenkirk, Staal, Smith and technically, Kampfer.  There is plenty of depth in the minors, including DeAngelo, Pionk, Graves, etc., in addition to any defensive prospects or draft picks acquired in any deals.

Goaltenders: Lundqvist.  Considering the retention of Allaire, finding a proper backup amongst the Rangers current minor league options or talent currently outside the organization should not be an issue.

This type of extreme transition should be put the Rangers firmly in the tank and in a position for a high draft pick.  Allow me to put on my conspiracy theory hat for a moment.  The NHL likes important franchises to draft franchise players (See McDavid, Connor and Matthews, Auston).  Given what the bottom of the league looks like (Arizona, Buffalo, etc.) I don’t think it’s far-fetched for the NHL to want to see Rasmus Dahlin in blue.  Either way, a top 10, probably top five pick would be on the table, in addition to the haul for the guys traded away.

With the focus on NHL ready prospects and the competitive jumble in the standings, the environment could be right for the Rangers to rebuild quickly and effectively with an eye on contention again as soon as next season.

The problem, of course, is that the organization will not do any of this and we will all be resigned to a fate of slow liver degradation (or worse, watching the NBA.  Gross).  So, that was my cathartic exercise of destroying our beloved Rangers in the name of getting them back to contention.  I’d invite you to do the same (or rip my strategy apart) in the comments.  Have a great weekend everyone!