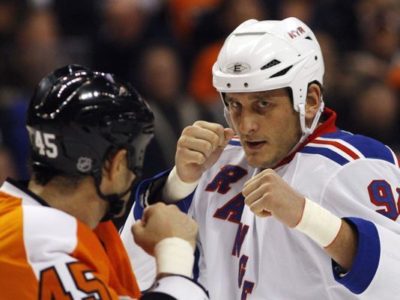 We miss you always, Derek

This past week has been a strange one in Rangerstown, a lot of which we’ve unpacked on the blog in recent days. We now know that our top signing over the summer was playing on a torn meniscus, we’ve seen games with five players out due to injury, and we’ve had some interesting broadcasting.

The issue of losing your new star defenseman to a meniscus tear is much like an onion: the more you peel back all the facts, the more you feel miserable and cry. For starters, the injury took place in training camp, four months ago. This is an 8-12 week recovery injury. This would be old news had it been handled at the time of injury.

Let’s play Devil’s Advocate, though, and give Shattenkirk the benefit of the doubt that he didn’t realize the severity and he wanted to play Opening Night for his beloved team. Fine, I’ll give him that. But the issue with waiting four months is what happens during those four months. As someone who’s played this game to the tune of two reconstructive ankle surgeries, let me be your guide.

Everyone and their mother has heard the phrase “cortisone shot,” and it’d be a fair assessment that plenty of people have gotten them. It’s a great medical procedure. However, when there is structural damage, the steroid — which reduces inflammation, but cannot repair a torn ligament, or tendon, or cartilage (as is your meniscus) — can do more harm than good. It reduces pain, but without fixing the issue, this causes overuse. An abundance of injections can accumulate extra scar tissue, which needs to be cleared during the surgery. Not to mention the pain always comes back.

The fact that Kevin Shattenkirk played so long on an injury is not something unusual, especially not for NHL players. How often per game do you hear about a blocked shot? Do you ever stop to think what that entails? The following is part of the job description: lay your (semi-)padded body out in front of a dense rubber disc flying in an imprecise trajectory at speeds upwards of 80-90 miles per hour. And you thought your job was rough.

This toughness, of course, winds up hurting the team. Shattenkirk played poorly, no doubt aligned with when the shot(s) wore off. We see (and praise, lol) the injury reports come out after a team is eliminated from the playoffs. Erik Karlsson was playing on a broken foot, for eff’s sake. The sport is physically rough, so why do we glorify additional toughness, the type that obligates players to put their health at risk, the type that eventually gives a few life-threatening brain injuries and, to a less-serious but more common extent, arthritis at a young age? Because the culture surrounding hockey insists that we do so.

On the Rangers’ postgame broadcast Sunday night, former player and noted basic math hater Ron Duguay made a pretty aggressive statement about the officiating and, inadvertently, how he feels about women:

“I think these guys would have been better off doing women’s hockey,

the way they did the officiating — because they were kind of soft.”

You don’t need any statistics – basic or advanced – to realize that this is problematic. Just plain old common sense. It’s almost like Ron isn’t aware that there’s a whole professional women’s hockey league and the Metropolitan area’s even got a team.

I understand that the rules are different in men’s and women’s hockey, and I even believe the fact that Duguay probably wasn’t even thinking when he made that statement. But to make this statement shows the following:

To say this past week has left quite a sour taste in many of our stomachs would be an understatement. The physical nature of hockey and the medical practices that need to take place are quite clearly more serious than what I need to do in order to manage my team’s finances day to day. But there needs to be something more structured to ensure players aren’t playing fast and loose with their bodies.

And, quite frankly, there needs to be something done about out of date, out of style has-been player-turned-broadcaster enabling the idea that a lack of physicality and a lack of a penis makes a player, a ref, a person, or an organization any worse.