With their nail biter win last night, the Rangers have now won two in a row and the process looks a lot better than it did a week ago, despite a rash of injuries.  The Blueshirts have four games remaining before the All-Star break, all against Western Conference opponents.  Should be an interesting week. Anyway, I have some thoughts…

1. It’s nice to see Rick Nash see some reward for his effort.  According to Matthew Barlowe (@matt_barlowe), Nash leads the Rangers in discrepancy between his iXG (expected goals) and actual goals.  The implication here is that Nash is snake bitten, which is certainly true, but I think there is also reality that he just simply isn’t the finisher that he used to be.  He still creates, as he is 26th in the league overall in iXG, and we are seeing some of that statistical correction this week, with four goals in his past two games.  This raises his season total to 13 on the season, which increases his pace to just over 23 goals for the season.  Obviously, not what you would expect for a $7.8 million cap hit, but this is still a very useful player the team should re-sign if the cost is reasonable.

2. I feel like the lineup decision to ice Nash-Zibanejad-Buchnevich was a “blind squirrel finds a nut” moment for AV.  More “process of elimination” than “process”.  He clearly views Miller as a middle-to-bottom six guy, so it was basically “let’s put my remaining NHL players on a line together and see what happens”.  I think what is so frustrating is that given the talent on the roster, it becomes very difficult to actually gauge whether or not this team could get hot and go on a run, because players are not put in a position to succeed.  (cue the “fire AV” discussion)

3. As you can see from the map below, the Rangers are still hemorrhaging HD shots against.  Now, they had more HD shots than the Sabres last night (14 v 12), but a couple things: 1. the Sabres are terrible, so you better get more HD shots against than them if you fancy yourself a contender, and 2) not all HD shots are created equal.  If you look at the second map, you see the defined area that encompasses HD shots is a pretty decent size.  Mapping the actual shots shows you the Rangers allowed 10 HD shots from what I would define as the “net mouth” (below the dots and inside the circles) to just six shots against the Sabres from that location.  To me, the difference comes down to goaltending, but there is going to be a tremendous amount of statistical variance in those locations, depending on a number of factors.  More often than not, though, Henrik Lundqvist is better than Robin Lehner.  Not that anyone needed additional evidence that goaltending is masking massive systemic deficiency, but here in a micro-example.

4. Now, onto less technical things.  Let’s start with the All-Star game.  Snore.  The NHL lost me when guys started wearing capes for the breakaway relay.  I remember being a kid watching the Skills Competition and being blown away.  It could be because I was young and stupid and thought it was entertaining. Or, it could be because no one takes it seriously anymore and it becomes forty guys dicking around for their own amusement instead of the audiences’.  The new 3-on-3 format was fun when the NHL was pissed at John Scott, but I can’t imagine bothering watching this year unless there is really nothing else on.  Maybe for Lundqvist, maybe, but probably not.

5. You know what else is motivating me not to watch the All-Star game?  Kid Rock.  Really?  We are legitimately hiring Kid Rock to play an NHL All-Star game in 2018? Forget any potential political connotations that may rankle half of your fan base (we are not getting into that part of it here), how about the fact that he is a terrible musician and nobody associates hockey with the American south? Intrepid Twitter user Ian (@Ie_canuck) tracked down a list of comparably priced acts that the NHL could/should have hired instead of Kid Rock. (see list below).  There is so much opportunity there!  Want some brit pop? Sure, how about some New Order? Want the folk rock that hockey fans love so much?  You got Hall and Oates and Bryan Adams.  Want to get weird?  Throw Jamiroquai out there.  How much would Canadians love to see Alanis Morrisette make her triumphant return? Rock legend Bob Dylan? Let’s let Billy Idol rock out for a six-minute set.  My point is, literally anyone but Kid Rock would be a better choice.  Oh, and the NHL knows this.  They just don’t care. 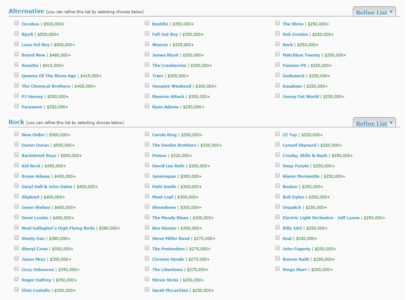 6. Next on my sh*tlist is the Olympics.  Forget the putrid uniform choices, it’s the rosters that give your gag reflex a workout.  My god, is this going to be boring.  Now, I could be wrong and you could see some inspired, non-professional guts and glory hockey, but who are we kidding? These guys are all pros.  Just not NHL’ers.  They are retreads playing in lower leagues with a few high-ceiling youngsters mixed in.  Give me the World Junior rosters on the Olympic stage over this dreck any day.

7. Let’s pivot back to the Rangers for a minute.  Given Hank’s workload, I would rather he just get some rest over the break, but since he is playing, I think would behoove the organization to get Pavelec some playing time over this west coast swing.  I would give Pavelec Colorado and Anaheim, while giving Hank the Kings and Sharks.  That would at least give him 2+ days off in between games leading up to the break.  Especially since Hank is still on pace for 70 starts this year.

8.* (Updated) Well, apparently, Kevin Shattenkirk has a torn meniscus and will require surgery.  Usually the time frame for this type of thing is anywhere between 4-12 weeks, depending on a variety of things.  This gives us a mid-February best case scenario, but you know it’s waaaaay too convenient for the Rangers to be able to analyze its performance over the next month with an eye on the deadline and have his return imminent.  Honestly, with the injuries to this point, I don’t think the Rangers can stick their head in the sand and not at least consider selling, but you know they will.

Alright, that’s it for me this week.  Good luck staying up for those 10:30pm games, everyone!