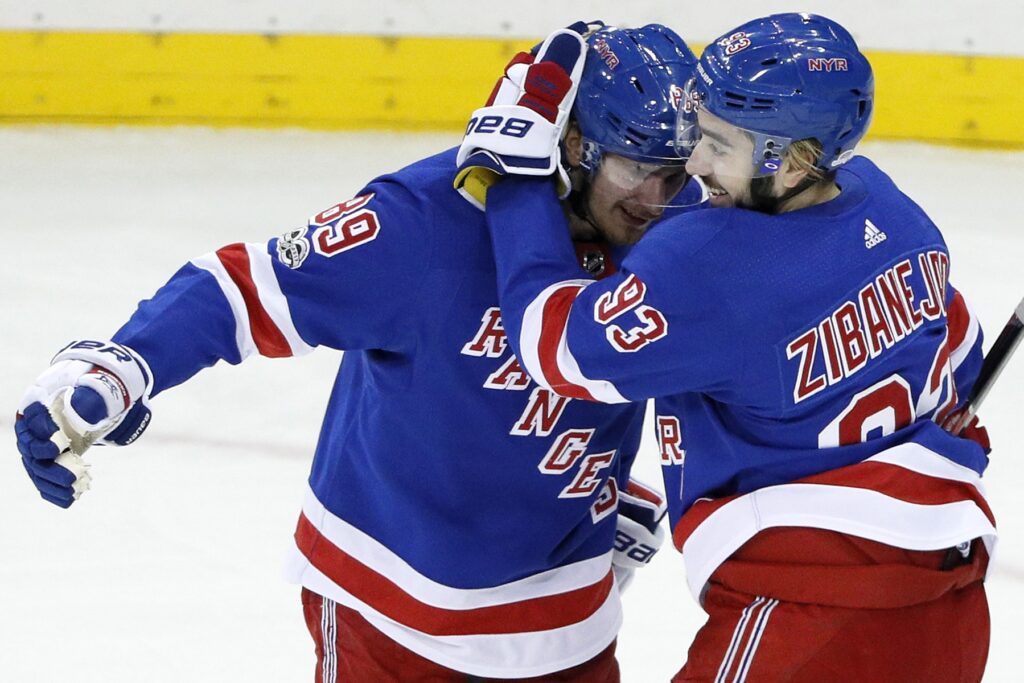 At the end of tonight’s game in Arizona, the Rangers will reach the midway point of their 2017-18 regular season.  That means it’s time for some midseason report cards!  To kick things off, we’ll be focusing on the top six forwards.

Complicating matters slightly is the fact that the Rangers don’t have a strict delineation between their top six and bottom six.  There’s definitely a fourth line.  There’s Kevin Hayes handling tough match-ups on a nightly basis, but his wingers have rotated regularly.  So for the purposes of this exercise, let’s call the following players “the top six”: Mika Zibanejad, Chris Kreider, Pavel Buchnevich, Mats Zuccarello, Rick Nash, JT Miller and David Desharnais.  Yes, that’s actually seven forwards.  Just roll with it.

When Alain Vigneault structures his lineup with these players on the top two lines (avoiding the silly stuff like putting Pavel Buchnevich or JT Miller playing on the fourth line), good results usually follow.  The Rangers, for all of their flaws, are an elite chance creation team.  They are currently tied with the Edmonton Oilers for first in the NHL with an xGF/60 of 2.62 at 5v5.

The most consistent trio during the first half of the season was undoubtedly the KZB line.  While it didn’t always produce an end product at even strength (just five goals in 194 minutes together), the unit drove offense to the tune of a 55.25 CF%, creating 48 high danger scoring chances in that time as well.  One of the turning points of this season may very well have been the now-infamous Halloween night game against Vegas, which supposedly saved AV’s job.  That night, Vigneault reunited the KZB line, which created all three third period goals, turning a 4-2 deficit into an eventual 6-4 win.  After that game, even a cynical AV would have a tough time breaking up the terrific threesome.

Further illustrating the value of the Rangers’ top guns is the fact that when one of them is out of the lineup, the effects are truly felt.  Mika Zibanejad missed nine games with a concussion, and the Rangers immediately slipped into a malaise after a decent stretch of hockey in November.  And now they’ll have to figure out how to replace the presence and production of Chris Kreider, which will be no easy task.

But while the KZB line has certainly earned its praise, the Rangers current leading scorer is none other than Mats Zuccarello.  The Hobbit has posted 8-23-31 in 40 games, putting him on pace to just about eclipse his previous career high of 61 points. Zuccarello is perhaps the most dependable Ranger in terms of his effort, even though he’s been hampered by some inconsistent play (and worse, no constant linemates to speak of).

Rounding out the top group are David Desharnais, Rick Nash and JT Miller.  Desharnais has been a valuable pickup for the Rangers, even though he’s often asked to do too much.  He’s miscast as a top six center, but because of the Rangers lack of other options, he often finds himself on the second – or even first – line.  Rick Nash might be the unluckiest player in the NHL this season.  Still a two-way force, Nash seems to get at least one or two great chances every game, but remains snakebitten with just 9 goals and a career-low 7.4 shooting percentage.  JT Miller is the team’s second-leading scorer with 27 points in 40 games, playing both center and wing (sometimes both in the same game).  Though he’s strong at the faceoff dot, Miller is probably best suited to play on the wing, especially if the Rangers can find a bona fide 2C to pair him with.

Overall, this group of players has produced fairly well so far, but the main issue has been consistency.  As the second half of the year arrives and “the grind” begins in earnest, the top six will have to find another gear in order to elevate the Rangers to contender status.