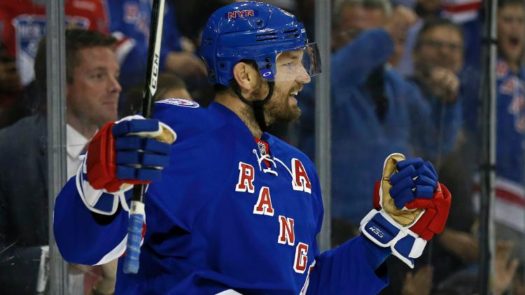 As the Rangers approach the half-way mark the season, they find themselves in an interesting spot.  They currently sit in the first wild-card spot, three points from dropping out of the playoff picture entirely, yet only four points from home ice advantage in the first round.  They have a soon-to-be 36 year-old franchise goaltender with more three seasons remaining on his contract at $8.5m per year.  They have several attractive soon-to-be UFA forwards on the roster in the form of Rick Nash and Michael Grabner.  They also have a surprising amount of young talent at the NHL level for a team that has been in full stop “go for it” mode for over a decade.

The team plays a counter-punching style, focusing on creating high-danger scoring chances, and relying on quality over quantity in the shots department.  This has created a difficult analysis in determining whether they actually have a sustainable profile as a contender.  There have been ups and downs in performance so, far, creating a “will the real New York Rangers please stand up” scenario over the season’s first half.  There are deployment issues and a fan base looking at a coach with a razor thin margin.  There is no question there are depth issues, personnel issues and coaching issues when determining whether this team is capable of making a run.

Yet, the front office does not go out and sign Kevin Shattenkirk unless they believe that they can do just that, regardless of hometown discount.  The team also is tied for the fourth best goal differential in the conference.  Their perception of this team will drive the asset management that will take place by the trade deadline at the end of next month.  The way I see it, there are five scenarios we could see play out.

1. Go for it. These are the Rangers, of course they are buying to load up for a run.  The team could focus on improving their forward depth (a center, please, in this scenario) and defensive issues and prepare for another march toward spring.  This would involve further depleting an already thin farm system, but the organization could get creative with roster players, as well.

2. Hold tight. Basically saying “We aren’t giving up on this season, but we aren’t going to mortgage the future, either”.  This would be the middle-ground option.  Understanding that the team as currently constituted is an unlikely, but possible contender and allow the players to take this group as far as it can before reassessing for next season.

3. Strategic selling.  Maximizing the value of guys like Rick Nash, Michael Grabner, Nick Holden, David Desharnais, etc.  This would allow the kids to take a more meaningful role down the stretch, but let’s be honest, subtracting Nash and Grabner would basically cripple any contention plans.

4. Strategic selling and strategic buying.  This scenario is far more complicated and unlikely.  This would require the Rangers to simultaneously go forward with the “strategic selling” plan, while replacing those guys with longer-term pieces.  Prices may not line up, palatable options may not be available, etc.  This one would be tough to realistically pull off effectively.

5. Full tear down.  The organization could believe that this roster is staring at a window that is closing and needs to look toward the future.  Maybe it’s with an eye toward getting back into contention during Lundqvist’s contract, maybe it’s looking toward Igor Shestyorkin.  This would involve looking to maximize everyone’s value from McDonagh to Zuccarello.  Brady Skjei, Pavel Buchnevich and Mika Zibanejad would probably be the only foundational players to survive this option.

Now, we know what the front office will do.  They will at minimum stand pat, while likely to add some pieces to give the team a better chance at proper contention.  There are a couple teams already firmly ready to sell, so they can begin shopping.  That’s not what I’m interested in, though.  I want to know what you think the organization should do.  That’s why I’m putting a poll at the bottom of this post.  I want you to tell me the direction the organization should take and let’s air it out in the comments section.


Categorized: State of the Rangers