How much are you willing to spend to keep Rick Nash around? 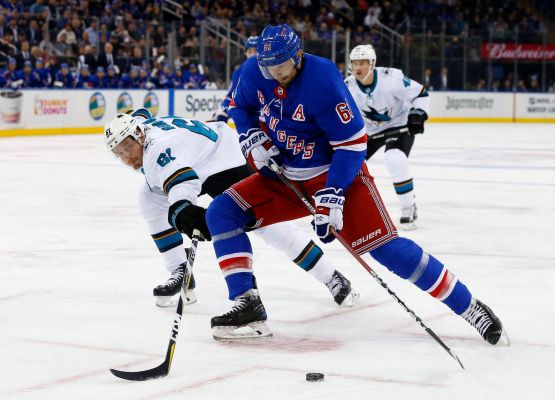 Much like their dilemma with Michael Grabner, the Rangers have a tough choice to make this offseason (or sooner) with Rick Nash. The good news is that unlike Grabner, Nash will likely be looking at a pretty large pay cut from his current $7.8 million deal. The bad news is that he still isn’t going to be cheap.

Nash may not be worth his $7.8 million on the score sheet, but he’s still good for roughly 25 goals and 40-50 points over an 82 game season. That may not seem like much, but that’s still top-six production. Factor in that Nash is a force on the ice and draws attention, and he’s a valuable asset for any team.

One of the interesting stories to watch, and what will ultimately drive Nash’s next deal, is how he finishes the season. He’s currently at 9-8-17 in 33 games played, which averages out to about 20 goals and 40 points. However Nash is currently shooting 8.7%, which is well under his career 12.1% shooting rate. While not a guarantee, we could see Nash’s goal total go up as his shooting percentage corrects.

But as we watch his goal and point totals, we also need to watch his injury history. Nash has only played 75+ games in a season once since joining the Rangers. That was also his 42 goal season in New York, which is not a coincidence. A healthy Nash is a dominant Nash. He’s been healthy so far this year, so if that continues, we may see that SH% correction throughout the dog days of winter.

The same problems with re-signing Grabner –there are a bunch of RFAs that need to be re-signed– apply to Nash as well. There’s a strong possibility Nash can get $5 million on the open market with a strong finish. He’d be 34 years old, so it would likely be a short-term deal, but $5 million is still $5 million.

I’m actually fascinated by the Nash free agency watch. If he gets to 25 goals and 50 points this year, then I could see a team giving him at least $5 million over three years. The Rangers likely wouldn’t want to get into that high of a dollar amount for a soon-to-be 34 year old. Term is going to be everything for Nash (and Grabner).

As for me, Nash has more of a proven track record than Grabner, so I’m willing to go a little higher to keep him around. Two years at $4 million is ideal, but $4.5 million is probably more realistic. Funny enough, you add that $4.5 million to the $3.15 million projected for the Grabner deal, and you’re still under Nash’s current deal. Two players for less than the price of one. Assuming the RFAs can get done under the cap, it sounds like a win to me.