A difference in goaltending styles 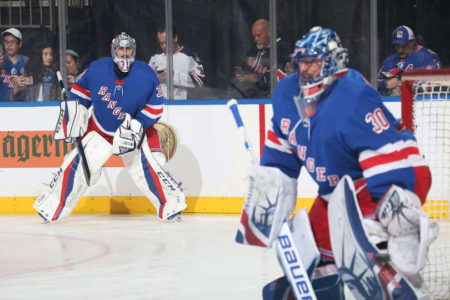 So far this season, Henrik Lundqvist has received the bulk of the playing time for the Rangers.  Hank had played remarkably well considering the Rangers are currently dead last in the league in xGA/60 and 27th in the league in CF% (all stats per Corsica.hockey).  Alain Vigneault has leaned on Lundqvist heavily as the Blueshirts have tried to rebound from their putrid start to try to gain solid footing in the division race.  This adjustment has forced Ondrej Pavelec into a much lesser role than the organization originally intended, as they had hoped he would be a ~25 game backup.  So far, he has started only five games.

When the signing was originally announced, I wasn’t crazy about it.  Spoiled by four consecutive years of high-quality backup performances by Cam Talbot and Antti Raanta, I didn’t see the same level of success coming from Pavelec.  After all, Talbot and Raanta were both younger goaltenders hoping to take the next step in their development and be in a position to start.  With Pavelec, that ship had already sailed and he was looking to retain a roster spot in the NHL.  At 30, his style was what it was and had no real reason to make meaningful adjustments.

Where Talbot and Raanta were sponges for the tutelage of Benoit Allaire, Pavelec’s adjustment has been slower going. We are now starting to see some small indicators that the famed goalie guru’s teachings are starting to sink in.  My original intention with this article was to demonstrate some visual differences between Hank’s style and Pavelec’s, specifically, but there just isn’t enough visual evidence that Pavelec has even played for the Rangers this year to do that meaningfully.

Instead, I thought it would make more sense to break down the inherent differences between a more technical goaltender like Lundqvist and a more athletic, reactionary goaltender like Pavelec.  This has two benefits: 1) it will give you a basic understanding of the differences independent of the idiosyncrasies of the two that we are specifically talking about here and 2) will allow you to have a basic expectation of Pavelec’s style in order to be able to take mental note of his progression (if any) into the more common Allaire protocol.  So, let’s get to it.

The biggest difference you are going to find is the basic approach to making saves, as a whole.  Both styles require intense focus and puck tracking abilities, but to different ends.  The more technical goaltender uses these traits to ensure maximum coverage and angular efficiency.  Think about it this way, the more technical goaltender wants to increase the percentage of shots that would just hit him if he were blindfolded in net and couldn’t react to the shot itself.

The more athletic goaltender wants to follow the puck so he can have his body travel to the destination, rather than it already being there.  Full disclosure: playing a more athletic style is more fun, especially for someone newer to the position.  There is a more of a tangible sense of “beating the shooter”, and allows for enjoyable acrobatics in save execution.  Athletic goaltenders tend to be a bit more aggressive and will attempt to physically fight through traffic and rely much more heavily on reflexes over positioning.

This also has a tendency to produce more “highlight reel” saves, as we tend to think of them.  Your goaltending academics and technical advocates will often point out that if you have to “ooh and ahh” a crowd with your save, you have done something wrong along the way.  Dominik Hasek was a master of this particular style, but he was an extreme example.  Many notable goaltenders, especially in the 90’s and 2000’s have used this methodology, including our beloved Mike Richter.  This isn’t to say that the more athletic goaltender disregards positioning or angles in net.  It just means that they are willing to sacrifice those things if it means putting themselves in a more instinctual position to execute a save technique.

The reason why this type of goaltending has diminished in both frequency and quality over the past few years is that the game has evolved past it’s capabilities.  Players are too fast, strong and accurate for this type of style to hold up consistently.  It really becomes a macro vs micro discussion.  On an individual shot or an individual game, the athletic goaltender can “steal” goals away with their skillset.  However, over the course of a season or a career, the law of averages eventually exposes the holes in the skillset and the goaltender will be less effective over the larger sample.  The technical goaltender plays the probabilities and time and data has borne out that style’s effectiveness.

This derives itself from the more blocking based technique employed by more technical goaltenders.  The idea is that the more excess movement in your save techniques, the more opportunity exists for unforeseeable variables to affect the play.  For example, if you are facing a shot from the point, putting as much body mass in the direct line of the puck at the most efficient angle will limit the ability for deflections and other variables to interfere with your save.  What is happening, in effect, is you are banking on the most likely scenario that your size and efficiency will cancel out the majority of outcomes on the shot.  The downside is that you limit your athletic reaction ability and if your gamble fails, the puck likely ends up in the net.

On the reverse side of this, the more athletic goaltender seeks to give themselves as much time and ability to react as possible.  Maybe this manifests itself in taking a more comfortable position that has less blocking surface or hedging a bit more against a shooter looking for that deflection or a possible backdoor pass.  Again, it’s a gamble, so over time the athletic goaltender will probably give up more goals than the technical one, but they will have some more impressive saves thrown in.

So, the choice between the two sounds like a no-brainer, right?  Of course, the more efficient and reliable (and ultimately, successful) goaltender is the one you want.  It’s not that simple, however, and that comes from the visual.  The athletic goaltender tends to look like they are trying harder and “never giving up” on a play.  They will scramble and slide and lay their body out for that save.  Never mind that they are swimming upstream from the beginning with their original positioning and save technique selection.

Technical goaltenders, conversely, can, at times look like they don’t have the capability to adjust to the play and if their original intention fails, the puck goes in.  This is partially true in that technical goaltenders give up some physical adjustability in the name of covering more surface area.  An example of this is that technical goaltenders tend to set their feet farther apart than their athletic counterparts.  This increases their on-ice coverage width, but your feet tend to be nimbler when they are closer together.

The other big piece of these differences is the aging curve.  Obviously, the traditionally athletic goaltender is going to see these skills, specifically reflexes and overall body elasticity, erode more quickly than someone with a more disciplined style.  As I had mentioned in a past article, Henrik Lundqvist is really the first true technical goaltender we are watching going through the aging curve.  His contemporaries have tended to be more of a hybrid in nature, so it’s difficult to gauge long-term effects.  The modern technical goaltending model can be very hard on your hips, knees and ankles.  Modern equipment has helped, but there was definitely a time that the style was employed without the gear looking specifically at medical concerns during its design process.

So, what does all this technical discussion mean to the average, non-goalie geek fan?  Take the game against Dallas for example.  Ondrej Pavelec is a tremendous athlete with a great deal of raw ability.  He is fully capable of pulling out those types of performances and wowing the crowd with his saves.  Especially when his physical execution is completely in-sync.  He is going to look “locked-in” and battle for every puck.  Conversely, the style itself limits his ability to do this on a consistent basis with those types of results.

Lundqvist is who is he because of consistency and the ability his style gives him to turn in performances that keep his team in almost every game.  Historical critics of Hank will often complain that he was “out-dueled” by so and so at the other end.  That is going to happen.  Being the best at this position does not mean always playing better or more effectively than the guy at the other end.  It’s performing near your peak ability the majority of the time.  Lundqvist has done that over the course of his career.

Well then, what should be we be looking for in Pavelec, going forward?  Pay attention to his limbs.  If he is moving less and staying still longer, attempting to take the shortest distance from his location from the puck and generally looking more efficient in net, Allaire’s philosophy is sinking in.  As the schedule compresses and Pavelec is forced into more playing time, this adoption is going to be critical for his performance level over the larger sample of the rest of the season.  The Rangers’ playoff hopes may just depend on it.