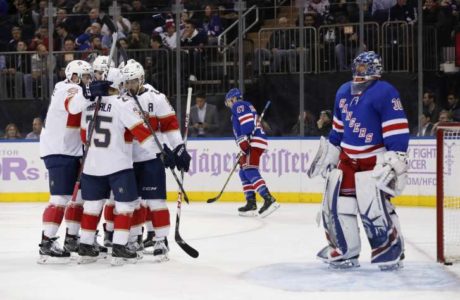 We’ve spoken a lot about the Rangers’ slow starts recently, and they were finally victimized by an early deficit. The Blueshirts lost on home ice for the first time in 8 games to the Florida Panthers 5-4.  The loss was particularly gut-wrenching, as the team clawed back from deficits of 3-0 and 4-1 to tie the game, carried by the newly formed “KDB” line.  David Desharnais filled in admirably on the top line for Mika Zibanejad, who warmed up but missed the game with a mysterious “upper-body injury.”  Desharnais, Chris Kreider and Pavel Buchnevich recorded three points each and nearly propelled the Rangers to a memorable win.

Unlike Sunday’s game vs. Vancouver, the Rangers were not guilty of no-showing the first period.  They created several chances and generally controlled play, but still found themselves on the wrong end of a 3-0 score, thanks in large part to James Reimer.  His counterpart Henrik Lundqvist didn’t make it out of the first period, and the Rangers were eventually undone by a couple of egregious miscues (and a dubious disallowed goal) in what was otherwise a solid effort.

On to the goals (thanks again to Shayna Goldman for the .gifs):

Try to follow the bouncing puck here.  With Florida on the power play after Brady Skjei was called for a questionable interference penalty, Jonathan Huberdeau takes a shot that bounces off at least three different players.  Aleksander Barkov was credited with the goal.

Nick Holden mishandled the puck badly (though credit the Panthers for jumping on him quickly), allowing Nick Bjugstad to set up Jamie McGinn for the quality scoring chance.  Steve Valiquette pointed out during intermission that Lundqvist may have been screened on this shot.

NYR score their first of the night, Miller from Zuccarello and Skjei pic.twitter.com/srF8uIqO3H

The Rangers get on the board early in the second, with JT Miller sweeping home Zuccarello’s partially blocked point shot.  Great work by Miller to lift Derek McKenzie’s stick

This was a comedy of errors by the Rangers, mainly an extremely slow and poorly-timed line change by the Zuccarello-Miller-Grabner line.  It led to what was essentially a 4-on-2 for about 10 seconds, which is an eternity in hockey.  On his third rebound attempt, Jonathan Huberdeau lifted the puck over a prone Pavelec.

Buchnevich cuts the NYR deficit in half, assisted by Kreider and Desharnais pic.twitter.com/xxalvPu0Go

The first of two Kreider-Buchnevich connections.  On this one, Kreider banks the puck to himself off the backboards, sending two Florida defenders the wrong way, and creates the time and space he needs.  The pass is perfect, and Buchnevich is strong on his stick to finish.

Kreider to Buchnevich, now we have Buchnevich to Kreider ? pic.twitter.com/g85jJFUiip

Another beautiful, tic-tac-toe Rangers goal.  That one-time Buchnevich pass across the slot line is ridiculous, and Chris Kreider going hard to the net is simply unstoppable.

Another perfect passing play by the Rangers’ top line.  David Desharnais puts it right on Kreider’s stick, and for at least a few minutes, it seemed like there was no way the Rangers would lose this hockey game.

What you don’t see in the .gif above is the egregious Nick Holden turnover which started the sequence.  Brendan Smith got hurt blocking the initial shot, and in the ensuing scramble, Denis Malgin (who?) gets open for the thunderous one-timer.  The icing on the cake here is Holden (who has been pretty good lately, but made some costly and noticeable blunders tonight) screening Pavelec, who really can’t be blamed on this one. 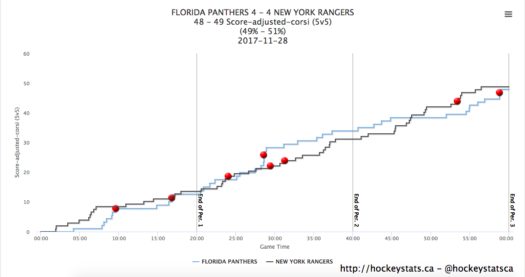 The score-adjusted chart above doesn’t necessarily reflect the true flow of this game, which was generally dominated by the Rangers.  For context, the actual 5 on 5 shot attempts were 54-42 in favor of the Rangers, and the total shot attempts were 69-48 for the game.  The Rangers controlled the puck and created a lot of offense.

Scoring Chances (5 on 5, not score-adjusted) 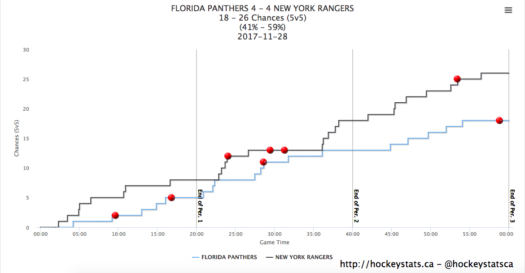 The lazy narrative around last night would be that the Rangers “weren’t ready to play”, but this was actually one of their better first periods in recent memory, as you can see above.  Once they went down, they pushed hard to tie the game and did.  Unfortunately, the Panthers had the last laugh.  Despite the result, this was a really exciting hockey game that had a little bit of everything (even some feistiness from Pavel Buchnevich).

The Rangers, who are all of a sudden banged up (Ryan McDonagh, Zibanejad and now potentially Brendan Smith are all nursing injuries), will look ahead to Friday night’s match-up with Carolina.