The Rangers are doing whatever is necessary to rake out two points each game lately, at times more theatrically than others. At the same time, they’re seemingly investing heavily in high blood pressure medication for their fans, which has become a requirement. The past two games have taught us that this team is magical at the Garden… magical in that they pull wins out of nowhere.

This week is relatively quiet, with games only tonight and Friday, and can help launch the Rangers higher in the rankings of a tight Metropolitan Division. As of Tuesday morning, the Metropolitan looks like this: 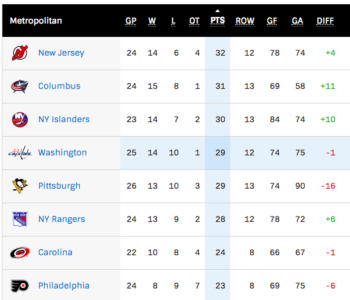 Listen: both of the games this week are easily winnable. Easily. In fact, the Rangers have already beaten both of these teams, and scored 11 goals between those two games. We aren’t in “must win” territory anymore, but it’d be silly not to win these.

On to the games:

This week opens with the Panthers visiting on the tail end of a back-to-back after beating the Devils last night. The team is only above Buffalo in the basement of a pretty weak Atlantic Division. The more this team changes, the more they stay the same.

Roberto Luongo has been on fire since he returned from a hand injury earlier this month, but since he played last night, we’re going to see the less talented James Reimer in net. Radim Vrbata and Evgenii Dadonov — their offensive rookie — will both likely be out as well, so this should really be a gimme game for the Rangers.

The Rangers beat the Panthers 5-4 in overtime the last time the two faced each other (November 4).

The Rangers made easy work of the Canes last Wednesday, beating them 6-1 in what was their easiest game of the season so far. Remember Scott Darling forgetting how to goalie?

Scott Darling. This is not good.

Mika Zibanejad gets the goal off of Darling’s MASSIVE MISCUE! pic.twitter.com/9CJRO7bYDh

Darling isn’t so great, but neither is Cam Ward, so as long as the Rangers can remember how to score, this game shouldn’t be too bad. Jeff Skinner is a dangerous tool, however he’s had a slow season with 15 points through 22 games as of Tuesday. He hasn’t scored a goal in six games, much to the chagrin of Carolina fans.

This team is a great possession team, but that means nothing if they can’t finish.

This should be a fairly easy four points for the Rangers and hopefully more good times for fans at the Garden.