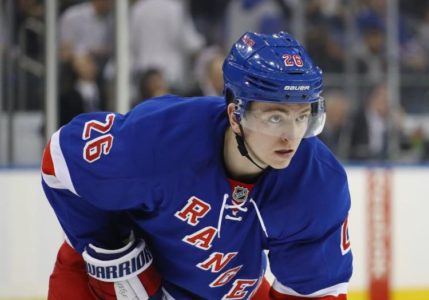 In hockey, sometimes you lose games you should win, and others you win when you should lose.  The latter applies to the Rangers in yesterday’s afternoon tussle with the Vancouver Canucks.  The Rangers were awful in the first period, and only marginally better in the second and third.  They survived a frantic overtime and two shootout deficits before escaping with the win, their fourth in a row.

Henrik Lundqvist was brilliant again, and the Rangers made the most of the chances they were able to create.  It was a disjointed effort, rife with turnovers and sloppy defense.  It wasn’t all bad of course, as again the Rangers showcased their superior offensive talent and comeback ability.  The Rangers are a dangerous team when they have the puck, but they won’t be considered a serious contender until they improve defensively.

Let’s take a look at the goals (with Dave on vacation this week, a special thanks to Shayna Goldman, whose .gifs I’ve used below; give Shayna a follow!):

Canucks take a 1-0 lead in the first period pic.twitter.com/Fmkc9d1pKx

Brendan Smith and Paul Carey combine for an ugly turnover at the defensive blue line, which enables Loui Eriksson to walk in untouched and pick his spot, through the five-hole.

The Canucks dumped the puck in and promptly pressured Steven Kampfer.  A brief battle along the half-boards turned into a loose puck right on Jake Virtanen’s stick in a soft area of the Rangers defense.  Marc Staal misses on the poke check, which leaves lots of time and space for Virtanen, who didn’t miss.

With about five minutes remaining in the second period, the Rangers began to show signs of life.  This was probably their best 5-on-5 shift of the game, as they had about 30 seconds of sustained offensive zone time.  JT Miller started the sequence, which ended with a deflected Nick Holden shot tipped home by Jesper Fast.

Grabner ties it early in the third, from Zuccarello and Shattenkirk pic.twitter.com/IOdkEml6vn

Jacob Markstrom should make this save, but credit Kevin Shattenkirk and Mats Zuccarello for the zone exit and springing of Michael Grabner for a partial breakaway.

Just 41 seconds after Grabner tied the game, the puck takes a strange carom off the boards, and Thomas Vanek finds a streaking Sam Gagner in the slot.  Gagner beats Lundqvist up high.  Welp indeed, Shayna!

Jimmy Vesey’s game-tying goal was one of the best of the year for the Rangers.  Kevin Hayes makes an insanely difficult and perfectly-placed pass, Rick Nash spins and centers, and Jimmy Vesey finishes after a beautiful deke to his backhand.  Wow.

Saves on Gagner, Miller, and Hutton. Then Vesey scores to win it in round 7 pic.twitter.com/fGV9DKmnrC

Both Kevin Shattenkirk and Rick Nash scored to keep the Rangers alive, and in the seventh round, Jimmy Vesey went top shelf to clinch it.  The shootout is an imperfect and probably unnecessary evil, but the lengthy ones can be really entertaining.  This one also happened on the exact same day, 12 years later, as the Marek Malik between-the-legs shootout winner against the Caps.  Time flies. 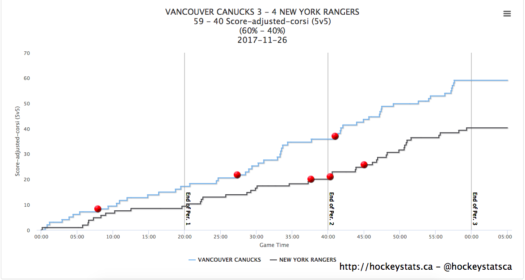 The Canucks controlled play for basically the entirety of this game, with just a few bursts of offense by the Rangers.  The Rangers are never going to be a volume shooting team, but this is a bad look and reflects bad process.  By the eye test, the Rangers were particularly bad with the puck in the defensive and neutral zones, which made it difficult for them to get sustained time in the Canucks’ end. 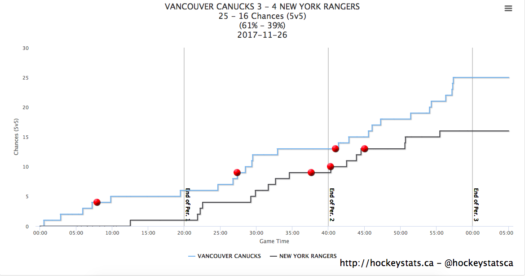 While the Rangers don’t usually out-Corsi their opponent, they’ve lately been on the plus-side when it comes to scoring chances, but that wasn’t the case yesterday.  One scoring chance in the entire first period?  Yikes.

On one hand, the Rangers were lucky to escape MSG yesterday with two points.  On the other hand, they battled back to win a game that they never led until Vesey’s shootout goal hit the back of the net.  They’ve won 4 in a row overall, 8 in a row at home, and 10 of their last 12 games.  After the way this season started, the Rangers needed a run like this to get back in contention.

Next up, the Rangers take on the Florida Panthers at home tomorrow night.