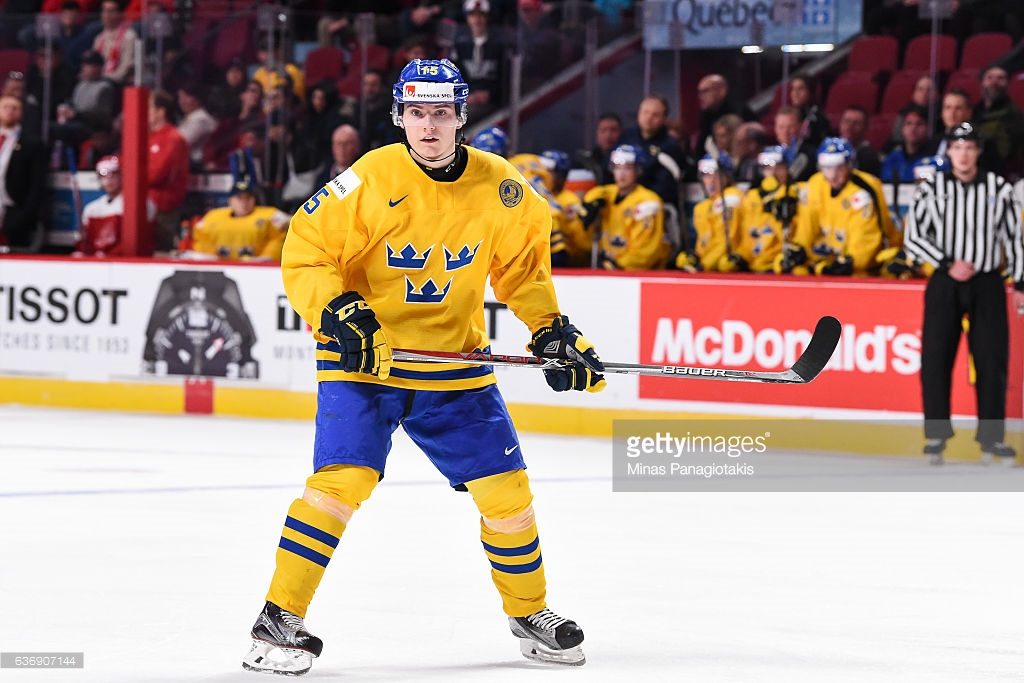 As you all know, I absolutely love looking at prospects and the upcoming draft. With more information readily becoming available, I am enjoying incorporating everything from individual scouting to the underlying numbers that have been unearthed due to research projects in the analytics community. Over the weekend, I came across a tweet by Byron Bader of the Athletic here that shows how likely a prospect can become an NHL player by using NHLe as a key. This piqued my interest.

I then incorporated Christian Roatis of NHLNumbers NHLe calculator to get an accurate NHLe for some of the Rangers forwards prospects. Byron’s tweet came at just the right time for me, I’ve noticed people have been complaining about picking Lias Andersson over Casey Mittlestadt due to point production, and while we can make the argument in regards to potential, the point argument in my opinion is invalid. When comparing NHLes both players have a nearly identical number which would also put them in the same cohort for Byron Bader’s NHL likeliness/superstar key.

NHLe is an interesting tool we have for prospects when it was originally pioneered by Gabriel Desjardins and improved upon by Rob Vollman. Essentially, NHLe compares how difficult it is to score a goal and point in the NHL vs all of the other leagues in the world. You can compare a player in one league’s point production to his point production in the NHL the year after, assuming that the talent within the 1 year period would remain consistent. This allows us to potentially predict a player’s production in the NHL the year after. By having this, we can standardize a prospect’s production for each league and compare players who would otherwise have vastly different competition.

There are certainly some possible setbacks though. First, forwards provide more points than defensemen. Including both in calculation for a single league NHLe can be misleading. This is something I intend to research in the near future and see how NHLe for forwards and defensemen can differ for each league.

Another thing that I am concerned about is that NHLe uses points per game. This is fine in the sense that we can calculate it for every league, but if we can somehow incorporate ice time and maybe a 5v5 NHLe, we may be able to also get a finer reading. Unfortunately not all leagues provide such stats so this can only be done for a few.

I feel the P/Gm may also dis-proportionally hurt KHL players. A majority of players under the age of 20 get very little ice time, that can lead to having 0 points in the KHL and an NHLe of 0. A prime example is German Rubtsov, the Flyers 22nd overall pick in 2016. Last year he had an NHLe of 0 in the KHL playing mostly 4th line minutes. He left halfway to the QMJHL and had an NHLe of 29 there.

In any case, all information is useful to provide a deeper report on a prospect. With a level head and some caution, we should leave this post with maybe more information than we all had about a week ago. I have separated my visual into two parts. The first will be following Byron Bader’s NHLe key based on draft year production. The second part is comparing the percentage of being an NHL player from Byron’s key and comparing it to the percent likeliness of a draft pick in a certain round being an NHLer from two sources. This allows us to maybe see if the Rangers would be operating with a prospect that is currently exceeding expectations based on former picks or not.

NOTE: Byron’s key provides little opportunity for some players to have an NHL likeliness of over 80. Travis Yost noted that 80% of first rounders make the NHL, so  I removed Filip Chytil and Lias Andersson from that analysis.  If one were to be interested in where they stand in NHL Likeliness,  I can gladly provide it in the comments section. 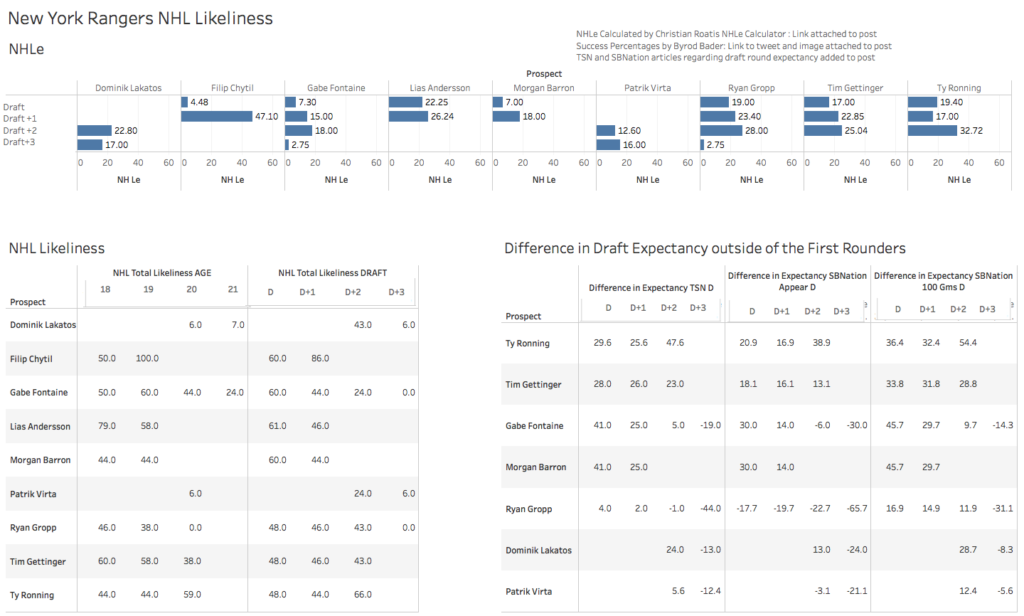 First thing we can immediately see is how difficult it is to produce points when you don’t get much ice time. Filip Chytil didn’t have a high NHLe during his draft year, but the model put value in him producing as a 17 year old in a pro league. We see that now as the Wolf Pack’s first line center, Chytil’s NHLe flies up to 47.1. So honestly welcome to the Filip Chytil show. He looks in line to not only be an NHLer but likely a first liner that can be a major part of the Rangers core.

Lias Andersson has been the target of a little bit of vitriol by some fans commonly in relation to Casey Mittlestadt. Interestingly enough, Lias Andersson had a higher NHLe than Mittlestadt, who played in high school last year, and they are at an identical NHLe this season as well while Casey is in college. The case study between them seems a bit overblown and perhaps it is with people valuing the NCAA a bit too much relative to the SHL.

We are also seeing something pretty incredible regarding Tim Gettinger and Ty Ronning. While they are late round picks, their production is actually near a 50/50 chance to become an NHLer, with Ronning currently exceeding that this season. They like to say a prospect either becomes an NHLer or not, but the reality is a 5th and a 7th rounder likely don’t have that chance.

As of right now the Rangers are in the presence of two prospects that can provide them great value. Looking at this for forwards I do tend to wonder: At what point do you feel a prospect is worth trading as opposed to hoping he makes the NHL? Is there a certain percent-chance that some people consider a threshold? Does it also depend on their draft position? Would a player drafted in the 2nd or 3rd round with a likeliness at 30% be traded before a 6th rounder who has a 15% likeliness?

For this stage of the analysis. I compared the percentages that were provided in work done by Travis Yost on TSN (linked above) and Adam Gretz on SBNation. The big thing I wanted to look at here was how the Rangers have drafted based on Bader’s key. I also wanted to see how the Rangers prospects are faring as they move years away from their respective drafts.

For this I took the NHL likeliness and subtracted the percent likeliness from the articles mentioned above. Anything above 0 suggests the Rangers may have found some good value and they have a better chance with this prospect than the average picked in his position. For negative it is vice versa.

We can immediately see that regarding the draft, every prospect the Rangers drafted had an NHLe that correlated to an NHL likeliness that exceeded the reports (Lakatos/Virta start at D+2 as they were drafted as overagers). In case you do not want to open the articles here are the percentages for the rounds that apply to the NYR prospects.

The Rangers have showed that they are adept at finding value in the late rounds, all players were more likely to make the NHL than the average in their round. Lets start with the bad news first. While Dominik Lakatos and Patrik Virta have looked alright with Virta even improving, given their age you’d like them to take the next step offensively. As mentioned earlier there may be issues with using NHLe as it currently is for predictive purposes but it does seem at the very least like a good key. They still have a chance but you want to see a bit more offense for their age to be more of a sure thing.

Ryan Gropp and Gabriel Fontaine also started off pretty strong. Gropp was right in line with his fellow 2nd rounders, though you can make the argument for the Barzal boost here if you so choose. Fontaine had looked like a pretty nice bet relative to his draft round to at least get a cup of coffee, with a shot to potentially be an NHLer. Unfortunately, both players had their likeliness take a nose dive as soon as they made the AHL. Shoddy production on both ends can be derived from many things, but I’d say Gropp, given his reputation as a point producer, is in a bit more danger than Fontaine. That said, the Rangers took players who were valued above their draft round selection.

But again, how good do Gettinger and Ronning look? I think it is so funny how opposite they are, but they are proving to be significant value for the Rangers. As mentioned in the earlier part, they are at the point in their development that it looks like they’re hovering around a 50/50 shot to make the NHL. That is huge value for a 5th and 7th round respectively.

It is so much higher than the expected rate for their rounds that you have to tip your cap to Clarke and the scouting staff because as of now it looks like we are more likely to get some NHLers than we were on draft day. I should also mention that in Ronning’s short stint in the AHL last year, his NHLe was identical to the same season in the WHL. Not only does this reinforce NHLe as a transfer coefficient but it also shows what Desjardin’s mentioned in his post:

“player’s skill level is approximately constant over this two year period, the ratio of his performance in each league can be used to estimate the relative difficulty of the two leagues.”  – Gabriel Desjardins

Morgan Barron, coming off his surprising 7 game point streak, is also starting to look like a value pick. He produced enough to be considered a good pick for the draft but NHLe for his league isn’t exactly known. Given that he played in Canadian High School I used Roatis’ Highschool coefficient so his draft year number may not be accurate. In any case, his production at the NCAA level at the moment is proving to be quite significant and can be a prospect to watch.

Overall, it is hard to project prospect success, but we can maybe gain some peace of mind knowing that the Rangers seem to be a pretty good team in drafting forwards in the later rounds. We can be getting excited knowing that Filip Chytil is starting to look more and more like  a top line NHLer. Perhaps we can stop also ragging on Lias Andersson, seeing that his NHLe is in line with someone like Casey Mittlestadt at the moment.

On the other end maybe it is also time to start looking at Gropp and ask ourselves, do we believe he can bounce back with more ice time in the AHL, or is he starting to look like a prospect to trade while he still has value? Perhaps we can revisit this all in January or February and hopefully he’d have more opportunity by then.