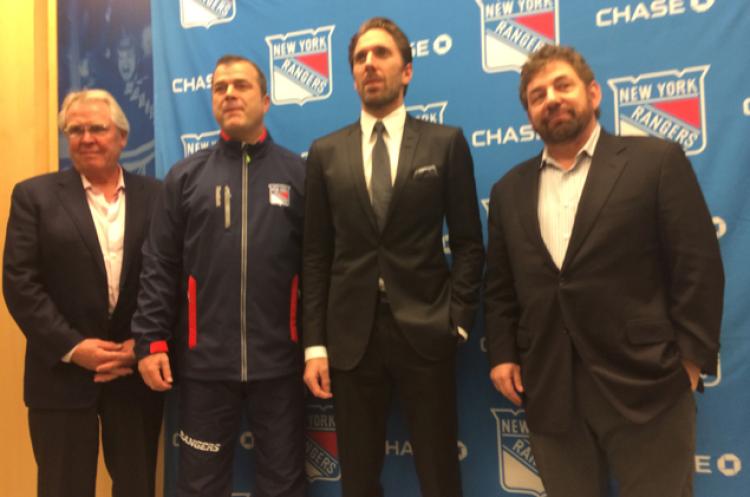 Being a fan of star-crossed team can be one of the cruelest forms of self-inflicted punishment. Only the most masochistic of us can envision an ending for our favorite team that most likely will lead to heartbreak, and yet exacerbate it with the hope that “maybe this year will be different”.

“History is written by the victors” – Winston Churchill (maybe)

For example, by Emmanuel Perry’s WAR metric from corsica.hockey, last year’s Washington Capitals were the 5th best team in terms of total WAR since 2010.  Despite the fact that last year’s Penguins were the top-ranked team in the same time frame, Washington outshot Pittsburgh by nearly 60 shots over the course of the seven-game series.

Yet when this series is remembered in 20 years, it will only be viewed as another instance in a long line of Washington’s playoff failures. No one will remember the dominant 118 point regular season campaign or the league-leading 81 goal differential. No one will remember that Braden Holtby, a Vezina winner the previous year and a .937 goalie in the playoffs prior to last year, put together an awful sub-.890 save percentage in the series.

All of this is to say, at the end of the season there are several teams who could have won the cup and came up just short in ways they had little control over. Those teams are often relegated to the waste bins of history if they don’t end up winning the cup, the also-rans who never made it over the hump. The 2013-14 Rangers threaten to become one of those teams, so let’s take a moment to appreciate the best team of the Henrik Lundqvist era.

Past – The King’s Merry Men

At the time when it was consummated, the marriage of Alain Vingeault and the New York Rangers was perceived as a match made in heaven. Following the tumultuous tenure of John Tortorella, Vingeault was initially received as a breath of fresh air. Finally, the Rangers had a coach who could supplement their all-world goalie with an offensive minded coach bearing Stanley Cup experience.

And what a magical first season it was. Although Vingeault’s tactics didn’t translate into many more goals, the coach was able to build upon Tortorella’s formula and coax a mix of timely scoring and stifling defense out of the group, as reflected in the WAR rankings by position from that season.

The high point undoubtedly came with knocking off Sidney Crosby and the highly favored Pittsburgh Penguins in the second round. In the series, the Rangers clawed back from a 3-1 deficit by holding Pittsburgh’s high-powered offense to 3 goals combined in the last 3 games of the series.

After eliminating Montreal in the conference finals (following a highly controversial injury to Carey Price), the Rangers made their first Stanley Cup final since their legendary Cup run in 1994. In any other season, the Rangers, would have been favorites, entering the series as with the 9th highest total WAR of any team since 2010. However, their opponents, the L.A. Kings, entered the series as the 2nd best team by WAR in that time frame, and had just knocked off the equally dominant Chicago Blackhawks in the Western Conference Finals. 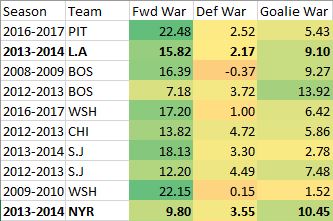 After a spirited series that included 3 overtime losses, the Rangers bowed out in 5 and despite coming within a game of the finals the year after, they haven’t been back since.

The Present: A Pyhrric run of victories

The Rangers, on the other hand, have suffered both Glen Sathers’ (and to a lesser extent, Jeff Gorton’s) short-sighted “win at all costs” mentality, which saw the team trade picks and prospects for over the hill veterans in pursuit of a Cup. In addition, Lundqvist’s dominance between the pipes over the past decade meant the team would always win too many games to bottom out even for one year. As a result, the only top 10 picks on the team are an aging Rick Nash (#1 in 2002) and Mika Zibanejad (#6 in 2011).

Since that 2014 cup run, the team has not been able to replenish the talent in front of Henrik Lundqvist as the Hall of Fame goalie hits the downside of his career. 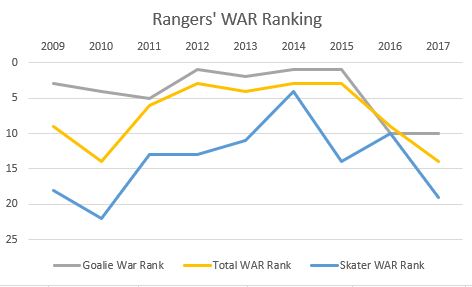 Since the start of the 2016-17 season, Lundqvist has posted a .909 save percentage, and the list of goalies to improve their save percentage after their age-35 season is small and uninspiring.

So as a fan, are you lured by the prospect of making the playoffs in an Eastern Conference without a clear-cut favorite? Or do you view the team’s most recent winning streak as a stay of execution of coach who may not know what he’s doing and could have just been riding aging curves and John Tortorella’s system to a Cup Finals appearance?

(Note: I ran a very simple regression on the expected number of playoff wins based on the total WAR of the team. Vingeault has won 5.16 more playoff games than expected in his Rangers tenure, so interpret that as you may.) 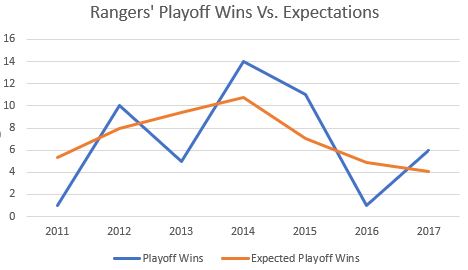 The Future: What’s the way forward?

With the Derek Stepan trade over the summer, the front office signaled that it has envisioned a scenario where it will have to improve a farm system that was ranked 3rd worst in the league by The Athletic’s Corey Pronman to eventually get back to competing for the Cup. But how far are they willing to go? For example, here’s a hypothetical trade exchanging the 1st round pick Montreal should have used on Matt Duchene for Rick Nash’s expiring contract. It’s not much but maybe it’s a step in the right direction.

The team already has a couple of potential franchise cornerstones in Brady Skjei and Pavel Buchnevich, and strong veterans/potential trade chips in Kevin Shattenkirk and Ryan McDonagh. As a diehard, you’re obliged to stick with the team through the lean years in order to truly enjoy the day they finally hoist the Cup again, However, a fair question to ask is, will any current player, coach or exec on the roster be there with you?