Why You Shouldn’t Always Yell “Shoot the Puck!” 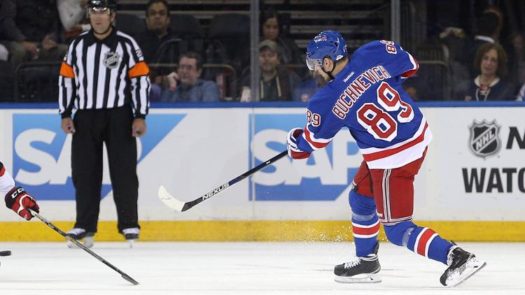 It is a rite of passage as a hockey fan to desperately scream “Shoot the puck!” at the team you root for.  It’s heard in arenas, bars and living rooms the world over, and why not?  After all, you miss 100% of the shots you don’t take.  Getting the puck to the net is never a bad play.  Insert hockey cliche here.

Last night during the Rangers/Blackhawks game, Eddie Olczyk (who is currently battling colon cancer, and working for NBC Sports during his 24-weeks of chemotherapy – get well, Edzo!) pointed out several 2-on-1 chances for the Rangers that didn’t result in a shot on goal.  On the surface, this seems both insane and infuriating.  But if you’ve watched the Rangers closely, especially in the Alain Vigneault era, you know that this isn’t necessarily something new.

Most importantly, it’s produced results, in the form of a higher shooting percentage (which can’t be solely chalked up to luck, since it’s sustained itself over the course of nearly four full seasons), and lots of goals.  Listed below are the Rangers shooting percentages (all strengths) compared to that season’s league average:

Over the last few years, we’ve been lucky enough to be exposed to some great analysis by Steve Valiquette, former Blueshirts backup goalie extraordinaire, and coiner of the term “Royal Road” (though he now prefers “slot line”).  Valiquette has studied shot quality and the impact of pre-shot puck movement on the goalie’s ability to make a save.  Valiquette’s research has proven that pucks which cross the slot line have a much better chance of becoming a goal, especially when compared to shots that originate from further from the net at bad angles.

The Rangers are masters at the slot line pass, both on the rush and now – with Kevin Shattenkirk, Mika Zibanejad and Pavel Buchnevich really exhibiting chemistry – on the power play as well.  Dave pointed out in his game recap last Saturday how all three of the Rangers’ non empty-net goals against Edmonton resulted directly from successful cross-ice feeds which led to pretty one-time finishes.

While the Rangers are a flawed team, they are demonstrably great at creating scoring chances, even though they don’t usually own a lion’s share of the total shot attempts.  This partially explains the current gap between their Expected Goals For per game (2.73, 6th in the NHL – good!) and Expected Goals Against (2.77, 30th – bad).

A huge reason for the Rangers offensive success is their approach.  As I pointed out above, it’s not simply down to shooting luck.  The Rangers operate in an offensive philosophy which gives the players license to “make plays with the puck”, which is a roundabout way of saying that they’re encouraged to make the extra pass.  Because often enough, making the extra pass leads to a tap-in goal.