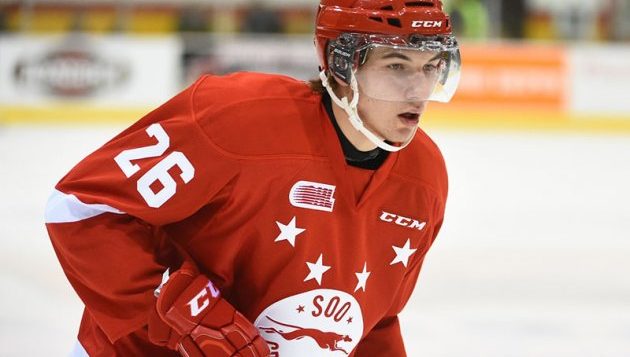 I feel that last week’s prospect chat was received well among the comments section. Today will have a little less to talk about but perhaps the quality of prospects can be more useful this week given the state of the Rangers. I mentioned that if people want a certain prospect talked about to just send me a message on twitter or in the comments section so I will try to work with those names.

Tim Gettinger – It is actually pretty funny that the Rangers drafted Tim Gettinger and Ty Ronning essentially back to back in 2016. They not only play a bit differently but I am pretty sure they’re a foot apart size wise. With all that said both have proven to be good late round draft picks. Gettinger has attracted a lot of fans due to his massive size and trend upwards as a prospect. It is actually quite interesting, normally people of his size that can’t skate get drafted in the 2nd round but when a prospect like Gettinger who has size but can also move fairly well somehow falls to the later portion of the draft.

In any case Gettinger has proven to be a do it all player, with him serving as the Captain for the Soo Greyhounds this year. His point totals are trending up over the last 3 years and is currently over a point per game with 17 in 15 games. While his point totals over his career aren’t earth shattering, I think it is important to break it down a little more.

Gettinger was scoring at first line rates at even strength last year, and was among the top of the league in G/60 at 5v5. While the average shot per game in the OHL among forwards was 1.6, Gettinger was consistently above the 2.6 mark over the course of the season. Being able to generate shots at such a high clip is usually a sign of future success as a prospect. He ranked 33rd last year in shots/gm but this year he is up to 14 averaging 4.13 shots per game. To go along with his shot generation he is also providing the Greyhounds with special teams help. Gettinger is showing the Rangers that he wants to and is likely able to make the jump to pro hockey next year, and can be a candidate for the USA world juniors squad thanks to his versatility.

Filip Chytil – The golden god. Chytil has shown his skill and his statement has been resounding. At only 18 years old, Chytil has nine points in eight AHL games, eight of which are primary points. Among forwards under 22, he ranks 12th in the AHL in shots per game. The only one who is still under 20 that is ahead of him is Jesse Puljujarvi (4th overall, 2016). He is 1st in primary points per game in this group as well. The barely 18 year old prospect is doing this well in comparison to some of the other top prospects in the league who likely get a mid season call up. The dynamic young forward has added excitement to not only the Hartford Wolfpack but also us potentially having a gem of a forward to build the next New York Rangers core.

Morgan Barron – Big congrats to Morgan for his first goal and assist in his NCAA career. He has a point in every game thus far this season, but unfortunately I can’t speak about his play since I have no way of watching Cornell hockey. I have been told that the big center has been involved on both ends of the ice. The Rangers definitely reached for him, as he is from a lesser known league, but they’ve had success with Canadian high schoolers going to the NCAA in the past (Tyler Wall). It looks like Barron is following suit.

Ty Ronning – To build up from the last editions comments I just want to mention that Ronning is once again putting the Vancouver Giants on his back and now has 24 points in 17 games.

Gabriel Fontaine – After a truly impressive pre-season, the defensive minded pivot has been having trouble producing in the AHL with 0 points in 10 games. When he does play it is usually on the 4th line and the Pack has had difficulty getting production outside it’s top-six, which is both a team and a personnel problem. Defensively, while still experiencing some growing pains expected for a rookie, he has shown his intelligence like in pre-season. Hopefully offense can come soon.

Ryan Gropp –  One of my biggest concerns with Gropp while watching him in the WHL is that it felt like he was a passenger. He needed a playmaker and it’s what engraved the idea of him looking like Michael Ryder to me. He currently only has 1 goal in 10 games in the AHL, but what really is concerning to me is his shot amount. With 12 shots in 10 games, Gropp –a player who is known to be more of a sniper– is ahead of only Adam Cracknell (11) and Gabe Fontaine (10) in shots by a forward this season. Cracknell has played in only 6 games.

I’ve had my issues with the Gropp pick for a while, but for a 2nd round pick he should really be able to generate shots at a better clip than this. Perhaps, just like Fontaine, it is growing pains and he can start it up soon. But even in the WHL it was pretty evident that he needed to be with a talented center. Maybe if the club sends Paul Carey down he can help out, as Carey is one of the better producing AHLers.

Ryan Graves – Snakebitten to say the least. One of the Rangers more promising prospects has gotten off to a pretty slow start thus far in the AHL. After being one of the few if not only bright spots last year, Graves has just four assists on the season. I think he can be a big part of a Hartford Wolf Pack resurgence, as a team that already has a top powerplay without a goal from Graves’ 100+ MPH shot almost seems like they aren’t even at full potential yet. I like Graves a lot and will continue to keep an eye on him as he seemed very close to at least get a cup of coffee soon.