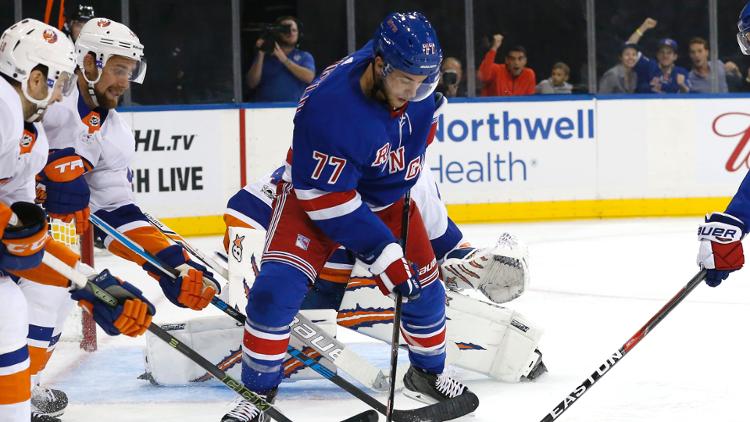 The preseason has wrapped up, and the regular season is just around the corner, which means it’s time to speculate about the way this lineup is going to shake out. Now, even though I personally enjoy wild speculation, as it happens corsica.hockey, the premier online stats database is back online after a summer hiatus, so we’ll be making somewhat educated guesses today. As an aside, I highly suggest you play around with Corsica, as I’ve learned a ton just exploring the numbers on there. What I’m interested in exploring today is something a little less sexy than how Filip Chytil will do, or who’s going to lead the team in points – what we’re going to be talking about today is how well Anthony DeAngelo might play with Marc Staal.

The top two pairings for the Rangers this season are pretty much set, with McDonagh/Shattenkirk and Smith/Skjei being more or less guaranteed at this point, although maybe there’s a little variation within that set of four players depending on the scenario or how AV is feeling. That leaves Anthony DeAngelo, who had a standout showing in preseason, to be paired most likely with Marc Staal. In a perfect world he’d be with someone like Pionk, but given that one of Staal or Holden is likely to play (I’d imagine hell freezes over before AV sits BOTH of them in the press box) and given that Staal is much more likely to play than Holden for a host of reasons, it’s looking like DeAngelo is going to be paired with Staal. So how will he fare?

Well, let’s take a gander at how DeAngelo did last year with his most common partner last season, Alex Goligoski. Last season, DeAngelo had a primary points/60 of 0.81, a relative Corsi of 0.6%, and an xG/60 differential of -0.80. On ice his xGF% was 40.4% and his actual GF% was 36.84%. Hypothetically, all other things being equal (and I know they’re not obviously, as the Coyotes last season were a vastly different team than the Rangers will be this season) if Staal is any better or worse than Goligoski on an individual level then DeAngelo should perform better or worse accordingly.

Last season Goligoski had pretty decent numbers in terms of points production, and relatively mediocre stats when it comes to the other stuff – his goals per 60 and primary points per 60 were 0.19 and 0.63 respectively, and his relative Corsi and xG per 60 differential were 0.1 and – 0.58 respectively. Marc Staal performed not quite as well overall, with 0.13 goals per 60, 0.30 primary points per 60, a -1.2% relative Corsi, and a -0.3 xG differential per 60.

On a more qualitative level, while I can’t speak as much to Goligoski’s play style, I’m fairly certain that Marc Staal will not suit Anthony DeAngelo’s play style all that well. DeAngelo seems to have an eagerness to activate offensively, making bold, confident movements on and off the puck in the other team’s end while lacking a certain je nais se quoi in the defensive zone. This could be problematic when matched up with Marc Staal’s play style, at least defensively. While DeAngelo is almost certain to boost Staal’s on ice number offensively, this pairing could be potentially disastrous in the Rangers’ own end. The saving grace here is that DeAngelo is an excellent skater, so if he develops any greater defensive sensibilities then he may be able to compensate at least somewhat for Staal’s lack of ability.

Overall it’s not looking great for the young blueliner acquired in the Stepan trade, who would likely flourish alongside someone like Brendan Smith for example. There’s a few caveats to both the quantitative and qualitative sides of the argument here, both of which have to do with the basic difficulty in comparing apples to oranges. While stats help level the playing field somewhat in this regard, it’s a basic fact that the broader team context at play may mean the Staal/DeAngelo pairing is not so bad after all. The other major caveat is that DeAngelo may very well develop further as he grows older and more experienced; a young player’s season last year is not always indicative of their season next year, generally speaking.

It’s also worth noting that with the Rangers rock solid pairings further up the depth chart,  and potentially surprising forward depth now that Filip Chytil is in play means that DeAngelo and Staal won’t be relied on quite so much in difficult even strength situations, so it may all be aw wash anyways. As far as a concrete prediction goes, I’m willing to bet DeAngelo performs roughly as well as he did last year, give or take a little bit, but that overall he may be stymied by Marc Staal’s game. In any event, we’ll be finding out in less than a week. Happy regular season everybody!