Promising signs for the power play 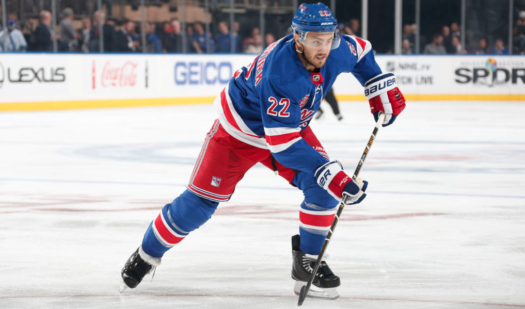 Though we’ve yet to see the fully assembled new-look power play deployed in game action, there are already numerous encouraging signs that this could year could be different on the man advantage.

One of New York’s biggest bugaboos in years past has been the seemingly simple task of bringing the puck safely into the attack zone. But the team seems better equipped to handle that this season thanks largely to the arrival of Kevin Shattenkirk. He has already demonstrated the ability to hit streaking forwards in motion at full speed – which seems like a minor thing but commands attention from the wall of opponents assembled along the opposing blueline.

Once the Blueshirts set up shop, everything will flow through Shattenkirk. He has registered at least 25 power play points in each of the last four seasons – a threshold that hasn’t been surpassed by a Blueshirt since Marian Gaborik notched 26 in 2009-2010. Shattenkirk is extraordinarily calm with the puck, makes quick decisions, passes the puck on his teammates’ tape, and doesn’t hesitate to put it on net when the opportunity presents itself.

At the point, the Rangers also added DeAngelo and Neal Pionk – who are both gifted with the puck and can distribute it to teammates efficiently. Holdovers Ryan McDonagh and Brady Skjei also remain solid options. In other words, the days of Dan Girardi seeing ice time on the power play are behind us.

Elsewhere on the special teams unit, Zuccarello has long been the engine that makes the power play go along the half wall and he should finally have some teammates that see the game similarly and can keep the puck moving in rhythm with the Norwegian as they seek an opening.

Buchnevich in particular looks ready to break out and showed flashes last season of what he can create in the offensive zone with time and space.

Then there’s the rookie, Filip Chytil. If he sticks around, Chytil should be in ideal position to cash in on Zuccarello’s signature needle-thread passes across the slot. Like Buchnevich, Chytil has the hands and vision to move the puck quickly and create gaps in the defense.

In front, Kreider has the size and strength to be an immovable screen that’s a nightmare for the opposing netminder and he established himself last season as the league’s elite puck redirector. Jimmy Vesey should occupy this position on the second unit and looks like he added the necessary strength during the offseason to hold his own.

The one big piece the Rangers are still missing is a classic triggerman. Despite racking up lofty shot totals, Rick Nash’s skills aren’t built around ripping one-timers and wrist shots from the top of the circles. So the power play will again be an offense by committee – rather than one that flows through a single player like Alex Ovechkin in Washington. But unlike in past years, that committee might be up for the task.