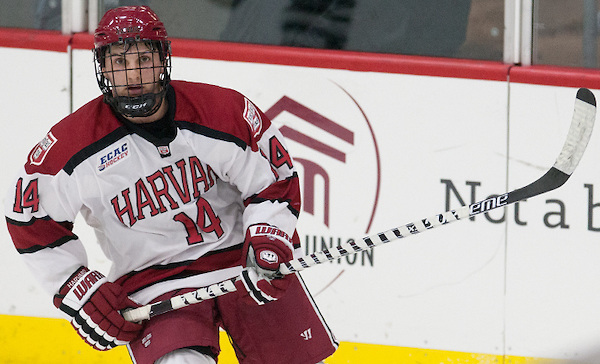 Per Larry Brooks, the Rangers are among the final three teams for Hobey Baker finalist Alex Kerfoot. Kerfoot was originally a fifth round draft pick of the Devils in 2012, and opted to go the free agency route over signing across the Hudson. Kerfoot is a center, a position of dire need for the Rangers, and the 23-year-old seems to have the quickness and skill that might make him a viable asset for the club.

The Harvard graduate put up steadily increasing numbers –around 30 points– with the Crimson before exploding for 16 goals and 45 points in his senior year. The assist totals remained somewhat consistent throughout his four years, and it was just his goal total that doubled in his final season.

Kerfoot would be another name in the fold for a potential roster spot, as the 5’10”, 175 lb center would likely be competing with Lias Andersson, David Desharnais, and potentially Boo Nieves and Adam Tambellini for the 3C spot. Either way, his addition would certainly help bolster the center depth, which is sorely needed.