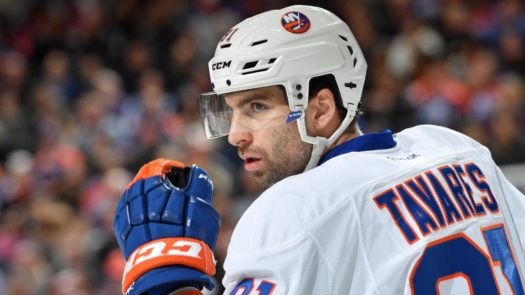 John Tavares is 11th among active players in points per game

As the summer drags on, the attention of the hockey world is beginning to shift to the coming season and beyond.

One storyline that is already generating buzz and will only continue to build momentum is the pending free agency of John Tavares.

For his part, Tavares has repeatedly expressed his desire to remain an Islander. That said – the reasons he might start seriously thinking about leaving the Islanders are obvious.

The club still does not have a permanent home arena, an issue that has dogged the franchise for Tavares’ entire career and appears unlikely to be resolved anytime soon. On the ice, the Isles appear to be only marginally closer to winning it all than they were several years ago. Tavares will surely be eager to see how Jordan Eberle and the team’s other talented young forwards fit this season, but if the Islanders are out of the playoff mix early, Tavares might really start to reconsider if this is where he wants to play out his best years. In other words, the longer this drags out without Tavares inking an extension, the more the pandemonium will build.

Obviously Tavares would be among the most coveted free agents of all time should he decide to test the market next July 1. As an elite 27-year-old in his prime, Tavares isn’t a complimentary piece a few contenders would hope to add – he’s a franchise building block that would reshape the trajectory of any team he joined.

The chances that Tavares would even consider playing for the Blueshirts are almost non-existent. But that almost is the key – for if there’s even a prayer a superstar player like this becomes available and open to unconventional options, then every team in the league will be willing to move mountains to land him.

Tavares will command a deal similar to the one just signed by Connor McDavid – a signing bonus heavy, maximum seven-year term worth over $12 million annually.

Even with Rick Nash’s $7.8 million cap hit coming off the books, the new deals for RFAs J.T. Miller, Kevin Hayes, Jimmy Vesey and Brady Skjei would make things complicated for New York. But again, Tavares is the rare talent that changes an organization’s game plan. If getting him somehow became realistic, then the Blueshirts would find a way to get it done and happily sacrifice key players to create the necessary funds.

The case for Tavares to renege on his loyalty and give the Rangers a second thought is that it would allow him to maintain his current home and join a Cup contender. But most of the league’s best teams would also give chase, so that part of the argument doesn’t hold much weight. If Tavares were to depart, it would be pretty brazen of him to join his club’s biggest rival in the same city. Imagine if the tables were turned and Henrik Lundqvist latched on with the Islanders? That’s probably not the wrath Tavares wants to face on a daily basis.

So yes, this is mostly an August pipe dream with little else happening in Ranger Land. But until Tavares commits to the Islanders, fans and management alike around the league will allow themselves to consider the ultimate “what if?” scenario of the 2017-2018 campaign.