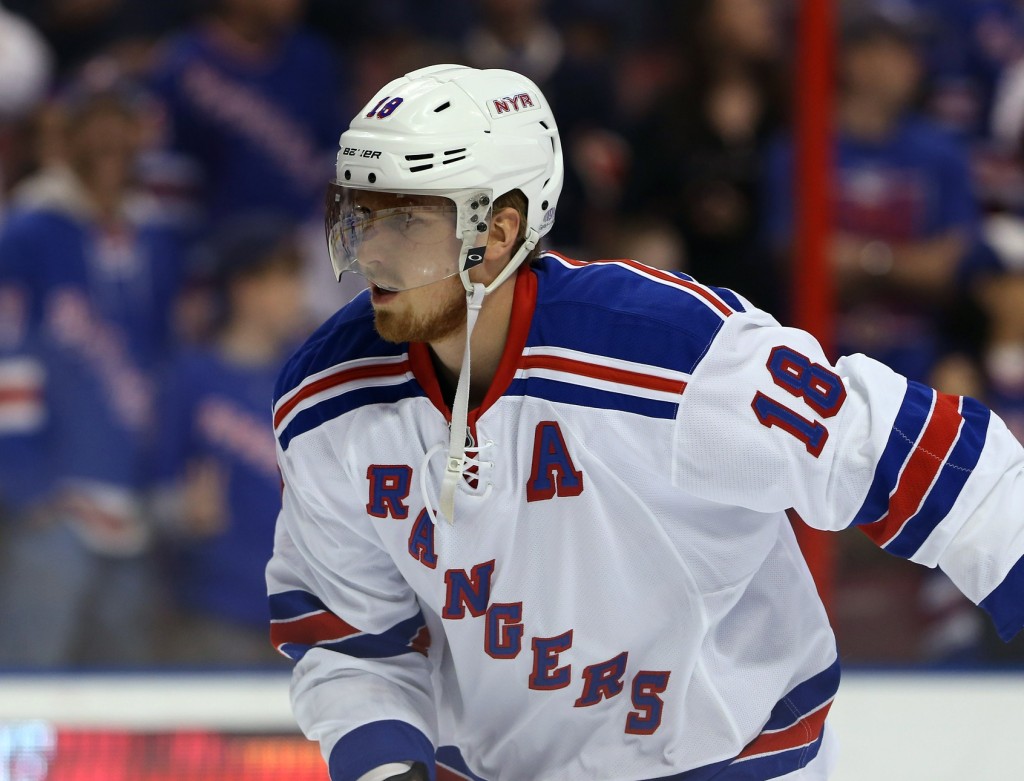 The dog days of summer are once again upon us, with little news breaking or fun happening. This week the only bit of excitement to go down was Mika Zibanejad renewing for another five years at $5.35m per. Since that wasn’t enough though what I’m going to do here is propose some more fun and games – and something that would actually make the team better to boot. That’s right folks, it’s time to toil in futility and speculate about a Marc Staal buyout.
Now, I know what you’re thinking, we already had our shot at buying out Staal and clearly he’s still on the team. The buyout window is closed and our beloved cyclops is still a New York Ranger. However, thanks to the aforementioned Zibanejad deal the Rangers now have a second buyout window and shifting circumstances make buying out Staal’s contract a prudent thing to do.
Due to a provision in the CBA, teams gain an extra buyout period that opens three days after their last arbitration case has been settled which lasts 48 hours. That means this weekend is go time for Jeff Gorton, who would do well to pay Staal his money and cut him loose. The argument isn’t primarily about cap space, but rather about the way in which Staal’s play and roster spot impact this team.
To he blunt and to the point, it really can’t be exaggerated how bad Marc Staal was last year on the Rangers. His play was only marginally better than Dan Girardi’s, who made less money as a Ranger than Staal currently does. Is Staal really worth $5.5m? For his level of play I’d say no, and while an argument could be made that playing him in sheltered scenarios on the third pair for limited minutes could be made, there is also a strong argument against doing such a thing.
First of all, even if you did that, he’d still be really very no joke seriously bad, just less bad than if he were being played against top guys for first pair minutes. Second, there’s (finally!) no good reason to do so, as the Rangers have, for the first time in what feels like forever, a glut of young, capable defensemen.
As it stands, the Rangers, ostensibly at least, have a third pair of Marc Staal and Nick Holden, with Bereglazov and DeAngelo as the presumptive seventh and eighth d-men. That still leaves out Neal Pionk, who should be NHL ready, and gives no chance to guys like Sean Day or Vincent Pedrie. There’s plenty of players waiting in the wings, and while Nick Holden can (and should) be readily traded Marc Staal unfortunately seems less attractive to GMs around the league. Hence, a buyout. Because why waste perfectly good, young talent up in the press box when they could be on ice in lieu of two aging veterans, one of whom has a gigantic contract.
Now I know what you’re thinking – that’s a lot of dead cap space, in addition to the penalty we’re already taking for buying out Dan Girardi. While I would point out that that’s a framing issue, seeing the situation as money paid against the cap instead of money saved against the cap (or are all Rangers fans glass half empty?) I think in the interest of fairness and letting you all make up your own minds, it’s only right for me to break down the numbers for you here. So this is how a Marc Staal buyout breaks down: for the next two years the Rangers would save $3.56m and pay a penalty of $2.13m, save $2.56m the year after that and pay a $3.13m cap hit, save $1.76m the following year while paying a cap hit of $3.93, and then take a cap hit of $1.43m with no savings for the 2021-25 seasons.
Adding that to the existing savings and costs of Dan Girardi’s buyout means we end up saving a total of $6.44m this year, $5.44m the next, and $4.44m the year after that while paying a total of $4.74m the first year, $5.74 the next, $6.74 the following year, and then $1.11m in addition to Staal’s buyout cap hit from 2020 through 2023.
Again all of this depends on how you look at it – you’re both saving money overall and paying a penalty for someone not to play for the team. The latter point is dampened by the fact that the Rangers finally have some cheap young defensive talent to subsidize the costs of paying those buyouts, at least for a few years until all of their next contracts kick in. Those are problems for another hot summer day when there’s nothing to talk about. For now, in the interests of both the team that needs improving and the fans that need offseason entertaining, please Gorts, buy out Marc Staal. Pretty please?