A few things on my mind 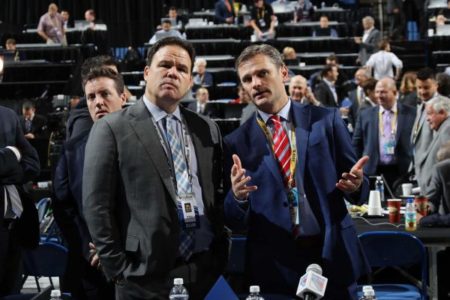 Welcome to the dog days, folks.  The time of year when hockey news is as dead as can be.  #HockeyInsiders are hanging out at their Ontario cabins and the closest thing to on-ice activities are various prospect camps.  This is all well and good if the Rangers weren’t two defensemen heavy and two centers light.

When Jeff Gorton started to re-make the defense this offseason, it was really inspired stuff.  He pulled the trigger on a Girardi buy-out, convinced Kevin Shattenkirk to take a sweetheart deal to come home and recognized how effective Brendan Smith was down the stretch in stabilizing a weak back end.  He had courted some Shattenkirk insurance in Alexei Bereglazov and Neal Poink.  The Rangers’ defensive depth this offseason looks an awful lot like their forward depth last offseason.

Moving up the ice, the Mika Zibanejad contract was a nice piece of business, parlaying a fluke injury into a discounted long-term deal.  Zibanejad’s upside remains tantalizing and the Rangers will be the beneficiaries of his prime seasons.  Make no mistake, though, The Rangers’ forward depth took a massive hit with the loss of Derek Stepan and Oscar Lindberg.  I am as bullish as anyone on JT Miller’s talent, but penciling him in the 3C with only David Desharnais as insurance is a risky move for a would-be contender.

We have been assuming since the beginning of July that a trade is coming to balance out the front and back ends.  So far, we haven’t re-signed Tanner Glass (although until he officially signs elsewhere, I’m going to be concerned), but what if the front office is really counting on Lias Andersson to make the team on opening night and will just mitigate Bereglazov’s KHL out clause by making him the seventh or even eighth defensemen?

That would give us a defensive alignment, hypothetically, of course, of:

Until Jesper Fast returns, the Rangers could carry the eight defensemen, but once his injury is up, something has to give.  The current state of the roster imbalance does raise several questions: is Gorton holding out for a significant return for Holden? Is he prepared to lose Bereglazov to the KHL now that Shattenkirk, Smith and DeAngelo are in the fold? Is Gorton comfortable with AV potentially utilizing a Staal-Holden pair in the top 4, even when better options are available?

I only ask these questions because there should be some fairly clear contingency plans at this level for a team who considers itself a Stanley Cup contender, and moreso because significant trades are rarely completed at this stage of the offseason.  Last year, as a fan base, we understood that you couldn’t completely remake a roster in one offseason and applauded Gorton’s work with the forward corps.  With Lundqvist another year older and fairly straightforward remaining business to attend to (lose a defenseman, bring in a center), the imbalance becomes a bit more frustrating.  It makes one wonder how the roster, as currently constructed, would fair over an full season and into the playoffs.

If you had asked me during this past season how high my confidence level would be if we more or less remade the entire blue line in the offseason, I would have said “very”, however the loose ends we are confronted with in late July have me feeling like there is still more work to be done.  What do you think?