Exploring the trade market for centers 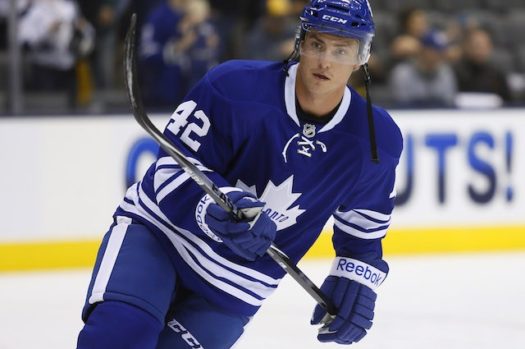 The Leafs backed themselves into a corner with the signing of Patrick Marleau and now exceed the summer salary cap threshold, leading to speculation they may have to trade a veteran for some relief. But with both Joffrey Lupul and Nathan Horton on the roster in name only and headed straight for LTIR, Toronto isn’t in nearly as bad of shape as it might seem. Still, the Leafs have a glut of forwards so pending UFAs James van Riemsdyk and Tyler Bozak continue to circulate through the rumor mill. With the players carrying nearly identical $4.2 million cap hits and not part of the Leafs’ future plans, there’s reason to believe Toronto might move one of them before the season.

New York would likely be interested in acquiring either player. A move for JVR would cement J.T. Miller’s move back to the middle, but give the Blueshirts impressive depth down the wings. Bozak, 31, would slot in as the second center behind Mika Zibanejad and be capable of matching Derek Stepan’s offensive production while also representing a huge upgrade at the faceoff dots. The Rangers would surely try to build a trade package for either player around Nick Holden, an expiring contract himself. But while Toronto might view Holden as a useful addition to a patchwork defense, Holden’s own $1.65 million cap hit reduces the allure somewhat.

Despite amassing 88 points across the last two seasons, Spooner, 25, has fallen out of favor quickly in Boston. The hybrid center/winger is gifted offensively, but a train wreck in his own end and awful at faceoffs. He’s probably an affordable piece for the Blueshirts to add, but as a one-dimensional player it’s hard to say with conviction that he’d make New York a better team. The Rangers have no shortage of offensive-minded centers – they’re looking for a reliable two-way player, or at least one that isn’t a tremendous liability in his own end. Still, the multi-position flexibility of Spooner is attractive, as is the price tag and his age. There’s a chance of a deal here, but if New York coveted Spooner, a deal likely would have happened months ago as Boston has seemed eager to part ways.

Many noted the massive Connor McDavid contract extension and speculated that with Leon Draisaitl’s still to come, Edmonton might have to shed salary in a hurry. Unfortunately, that’s quite wishful thinking. The Oilers still have nearly $17 million in cap space for this season – enough to pay two Draisaitls, if it were necessary. After years of futility, Edmonton is finally on the cusp of contention, so there’s no chance the Oilers are going to immediately dismantle their roster by shipping out RNH prematurely. A day of reckoning may come in a year or two when Nugent-Hopkins’ $6 million cap hit is too cumbersome to bear, but it’s not going to be this offseason.

Colorado’s search for a Duchene suitor willing to pony up a bounty for the 26-year-old’s services has led the Avalanche nowhere. GM Joe Sakic continues to insist on a blossoming young blueliner plus much more and thus far he has not met a deal to his liking – even with Travis Hamonic purportedly on the table from the Islanders and Ryan Murray from the Blue Jackets. Sakic would love to pry one of Nashville’s horses away, but the Predators have made it abundantly clear that’s not going to happen and may have ended their pursuit of Duchene with the signing of Nick Bonino. No doubt Duchene would be a huge acquisition for the Blueshirts, but since they rightfully won’t part with Brady Skjei, there’s just no deal to be made here.

Somewhat similarly to Spooner, Sabres fans have soured on Girgensons, the No. 14 pick in the 2012 draft. Girgensons is still just 23 years old, but the consensus seems to be that he has little room left for growth Girgensons is a perfectly capable bottom-line centerman that brings some grit, but one that’s not necessarily an upgrade over what New York already possesses. Girgensons might be affordable to acquire, but there’s not a lot to indicate that giving up any sort of assets to bring him into the fold would be a prudent move.

It has been well documented that Vegas has a plethora of centers. But GM George McPhee has also made it known that he’s hoarding young players and it doesn’t make a ton of sense for him to shuttle any of them out of town before seeing how his team comes together on the ice. The Knights’ building process will continue to play out over the next couple years, but it’s hard to come up with a compelling reason for Vegas to deal a guy like William Karlsson before he plays a game for them. If New York wants to dangle a first- or second-round pick at McPhee, then he would surely listen. But if the Blueshirts weren’t willing to pay that price to protect Oscar Lindberg in the first place, then there’s little reason to believe they’ll turn around and pay the piper now.

When Edmonton inked Jussi Jokinen, the last attractive UFA forward for New York’s needs was plucked off the market. There are still over two months to go until the season, so GM Jeff Gorton will continue to scour the trade market – but the pickings are slim. Most teams have the rosters in place they want to go to training camp with and aren’t clinging on to extra solid centers in the hopes a rival GM might come calling with an offer they can’t refuse.

While the possibility of a swap will always loom overhead, it’s far more likely that the Blueshirts will enter training camp with Zibanejad, Kevin Hayes and David Desharnais locked into three spots, with Boo Nieves and Lias Andersson competing for a job and Miller the fallback option if neither rookie is ready.