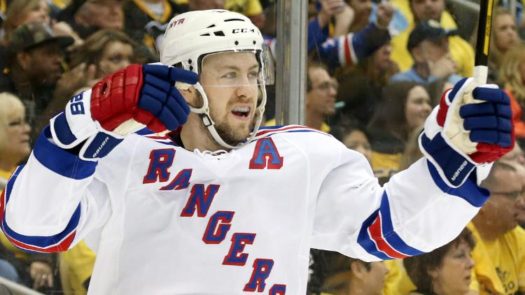 The news came fast yesterday. First came the front office moves. Then came the Matt Puempel extension. Then the Dan Girardi buyout. Then came the next bombshell, as Bob McKenzie noted that Derek Stepan’s name has been “prominent” in trade talks around the league. Now that doesn’t mean Stepan is going to get traded, but McKenzie is not “Rumor Break” or “Hockey Insiderrrrrrrrr” or “NHL Rumors Daily.” When McKenzie says it, it’s legitimate.

With the Girardi buyout, Kevin Klein’s potential retirement, and now the possibility of a Stepan trade, GM Jeff Gorton is making some serious moves to retool this team for a Cup run in Henrik Lundqvist’s window. The Girardi buyout and the Klein retirement save $5.8 million ($2.9 million each) on the cap. As for the Stepan trade, there are several ways Gorton can go, and each option is intriguing.

Trade for a defenseman

This is the prevailing logic. The Rangers need a right handed defenseman, and Stepan is a solid chip to try to land such a piece. There are a few options here, with the Ducks being a primary target. Stepan for Sami Vatenen isn’t a deal I’d make, but I would certainly do Stepan for Josh Manson+. Minnesota is a solid choice too, although the only two pieces are really Matt Dumba and Jonas Brodin. Dumba has a ton of offensive potential but could be tough to watch in his own zone. I’m not really sold on Brodin, but have been told he’s worth his contract.

Those are two logical choices, however there are a few wild cards. The first is Tyson Barrie in Colorado, whom Larry Brooks mentioned could be a target. There’s Justin Faulk in Carolina, but that’s an in-division trade. San Jose, who just lost Joe Thornton and Patrick Marleau, could also use another center. Brendan Dillon would look nice on the right side of the defense.

A trade for a defenseman is certainly the most logical, however there are a few other options.

Trade for a forward

I know it seems counter-intuitive to land a forward, but there are a few perks. Let’s be clear: Derek Stepan is a solid center. He’s consistently a 50-point player and he is one of the better two-way centers in the game. He’s a smart player who is good in all three zones. That has significant value.

The biggest name that also seems to be available is Alex Galchenyuk in Montreal. The Habs have this strange habit of making trades that make us scratch our heads (PK Subban), and a Galchenyuk trade would certainly be another one of those.

Galchenyuk is really the only name/team that I can think of that would want to swap a forward for a forward. I’d venture a guess that something like this would happen after the expansion draft. This type of trade isn’t one designed to take advantage of a team in an expansion draft compliance problem.

This is an idea that seems to have gained traction, as people are generally obsessed with getting picks and prospects. It’s a fair idea, just the wrong timing, which unfortunately makes this the wrong idea. The Rangers are a few moves away from a legitimate Cup run, and they’ve already made two (including Klein). Henrik Lundqvist doesn’t have many elite seasons left, and retooling the team for runs while he can still play will be key.

Replacing Stepan is going to be tough for the Rangers if they don’t land a forward in a trade. The idea that Mika Zibanejad can be a 1C is fine, but neither Oscar Lindberg nor Kevin Hayes can be trusted as a 2C. Even if Hayes finds a way to produce consistently, probably with more offensive zone starts from Alain Vigneault, then the Rangers would need at least a bottom-six center.

Someone like Erik Haula from Minnesota fits this bill. So it makes you wonder if something like Stepan for Haula and a defenseman could be in the works. What about Montreal and Galchenyuk and a defenseman (good lord not Beaulieu)? San Jose and Dillon+Hertl?

There are a ton of options here if Jeff Gorton is going to get creative. But the biggest piece here is for the Stepan haters: He’s worth more in a trade than you think. Remember Scott Gomez?