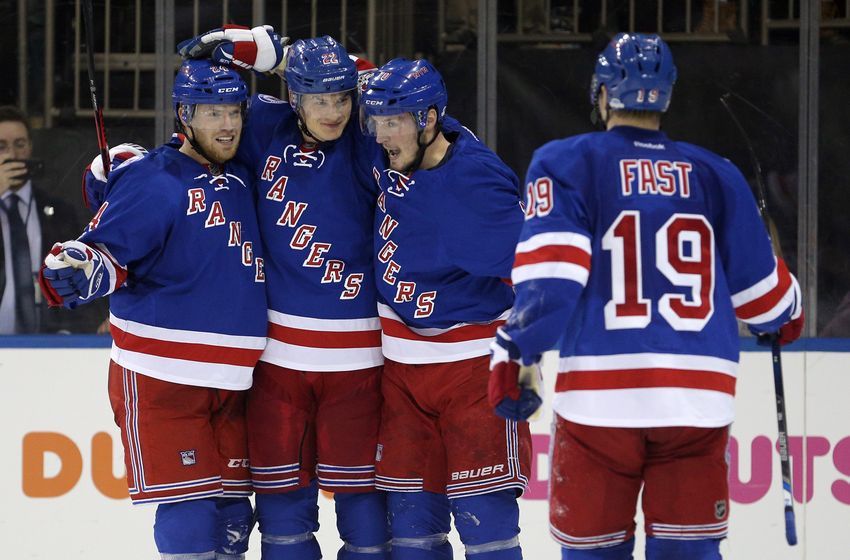 The most exciting part of this offseason is clearly the expansion draft. We spent a good amount of space going over the rules of the draft and the shenanigans that will lead up to it, but not much space has been spent really analyzing which players Vegas may select. Everyone seems to have a different opinion of who the Rangers will lose, and all are credible.

So let’s review who the Rangers are going to protect:

These are the obvious choices, either by rules (NMCs/exemptions) or common sense. So the players of note who will be exposed:

Raanta was the popular choice to be picked before the playoffs because of his stellar regular season. And this is certainly a real possibility. However the expansion draft is goalie heavy, and Raanta may not be the best player for Vegas in the future, or even this year. For example, names like Joonas Korpisalo, Malcom Subban, and Matt Murray may be available as the goaltender of the future. For the goalie of now, and to help get Vegas to the cap, Jimmy Howard, Antti Niemi, and Kari Lehtonen will likely be available. One of James Reimer or Roberto Luongo will be available as well.

Of the players the Rangers could lose, I put Raanta at the bottom of the list.

Grabner is the next guy on the list that folks think will get selected. He’s coming off a great year, putting up 27 goals and presenting a legitimate threat to score on the penalty kill. With just one year and $1.65 million left on his deal, he’s minimal risk as well. He’d be a good body for one year.

But that’s the thing, Grabner will be 30 next year, and all signs point to Vegas looking to load up on futures. There are going to be younger forwards available in the draft that could fill the middle-six role, plus there are always short-term UFAs that could fill the top-six. Grabner is certainly an important Ranger. However he’s likely worth more to them than Vegas. I put him right fourth on the list.

Holden is an interesting case. He will be 31 years old by the draft, and like Grabner, has just one year remaining on his deal at a reasonable $1.4 million. He too is coming off a career year, putting up 11 goals and 34 points. However he had a rough playoffs, which certainly is fresh on Blueshirt fans’ minds. But again, he, like Grabner, would be a body for a year.

That said, Holden is one of the few defensemen available that has good offensive numbers. Anaheim will certainly issues with potentially exposing Sami Vatanen or Josh Manson. It’s also looking like Marc Methot, Trevor van Riemsdyk, Mark Pysyk, Jonas Brodin, and Jack Johnson will be exposed as well. That’s just through some of the teams I looked at. There are some good names out there, but Holden put up more points than all of them last season. It’s a tough call, and if Vegas views Holden as someone with offensive skill that kids can learn from, they may look at taking him. I put him third on the list.

Lindberg fits the mold of what Vegas is looking for. He’s a good two-way center who is smart, can play on the penalty kill, and probably fill a 3C role on an expansion team. However he is coming off hip surgery and is not as young as people think, as he will be turning 26 early next season. Despite the short tenure in New York, he’s not that young.

Lindberg’s stock among Ranger fans blew up in the playoffs, as he consistently looked very good. However let’s not let that blind us, as Lindberg is not a top-six center. Even with significant talent lacking in the expansion draft, Lindberg still slots out as a 3C or 4C in Vegas. Is that worth it to them? It could be, since good centers are tough to find. It really depends on how much Vegas weighs his playoff performance versus his two years in New York. Given the surgery and the age, I put him at second on the list.

Fast has been an unsung hero in New York. Coach Alain Vigneault has used him in almost every situation imaginable since he came over from Sweden. He’s not going to light the lamp much, averaging 25 points over the past two seasons, but he always seems to be in the right place at the right time. In the 2015 playoffs, he was on the ice for the Carl Hagelin, Ryan McDonagh, and Derek Stepan overtime winners. That’s just impressive.