Thoughts prior to Game 4 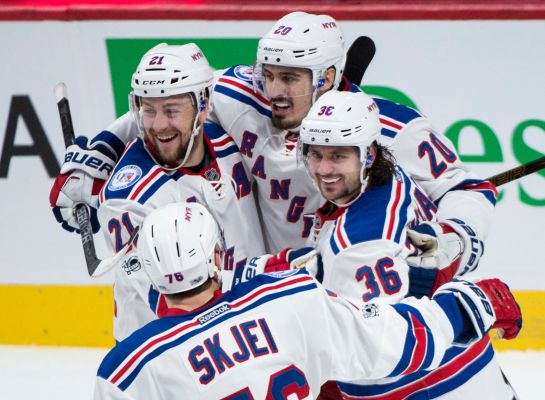 The Rangers have a chance to tie the series tonight after getting themselves in an 0-2 hole. Considering the way they played in Game 3, anything is possible. This, of course, assumes that the coaching staff doesn’t get in their own way. But naturally, I have some thoughts.

1. Starting with the obvious, the Rangers need to ensure they play the same way they did on Tuesday in Game 3. Anything less and it gives the Senators room to make it a 3-1 series lead. They found what works, and they need to step on the Sens’ throats and push and not let up. Keep pushing with speed. Keep getting those key dumps to break the trap. Keep that pressure up. And most importantly, keep that cycle in the offensive zone. Craig Anderson is weak when you make him move. That’s nine goals in two games. Keep the pressure. Keep limiting the Senators to the outside.

2. The biggest difference in Game 3 was the defensive deployment. Marc Staal and Nick Holden were moved to the bottom pairing, while Brendan Smith and Brady Skjei moved up. This worked for the Rangers, as Smith/Skjei were able to handle the uptick in competition against and defensive zone starts. That left Staal and Holden to be sheltered with offensive zone starts. That worked across the board. There’s no reason, at this moment, to change anything. Perhaps Staal/Holden are not a good matchup against Ottawa’s speed, and Skjei/Smith, the better skaters, have the better skill set to deal with it.

3. That brings us to coaching. I don’t think this is a question about Guy Boucher out-coaching Alain Vigneault. I think it’s Vigneault –and Jeff Beukeboom– getting in their own way. In the playoffs, it’s not about who has a track record. It’s about who is playing better, right here, right now. To the point above, Skjei/Smith are playing better, so give them more minutes. In the playoffs, every shift has an impact on the series. It’s not like the regular season, where it all evens out over 82 games. These are basically four straight seven game seasons. Treat them as such.

4. When it comes to the defense, meaning team defense, the Rangers did a phenomenal job on Tuesday of limiting the scoring chances against. The Senators eventually got close to even in terms of raw shot attempts, but they were mostly from non-dangerous places. That was the key difference between Saturday’s debacle and Tuesday’s dominating win. When the team defense –taking away lanes, tying up the stick in front, active sticks in passing lanes, forcing the play to the outside– is in sync, the Rangers are close to unbeatable. Consistent team defense is going to be key.

5. If the last two games showed us anything, it’s that the Rangers offense may have finally woken up. They scored nine goals in two games. They finally got contributions from Derek Stepan, Chris Kreider, and JT Miller. Kevin Hayes finally woke up. The top-six controlled play. If the talent in the top-nine can score consistently, then the Rangers are going to be very difficult to beat. Not many blue lines can match up with their fourth line, and when you couple that with a consistent top-nine, they are downright dangerous.

6. I am perfectly fine with Tanner Glass in the lineup if it means Staal/Holden play third pairing minutes in this series. There. I said it.